Ruapehu and the hot pools in New Zealand 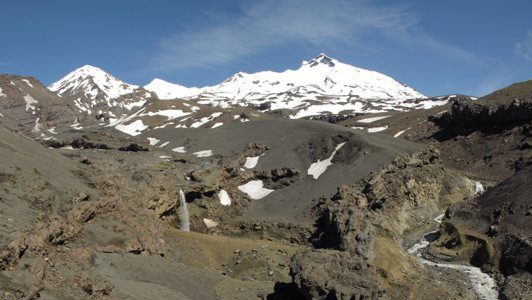 Damn, how scary! Apart from the risk of an avalanche, using crampons and an ice axe, and the menacing sea of ​​mist that stretched 200 meters below me, climbing an active volcano makes you feel small and insignificant in the midst of the vastness of nature. It makes you feel the most primitive fear of the human being! 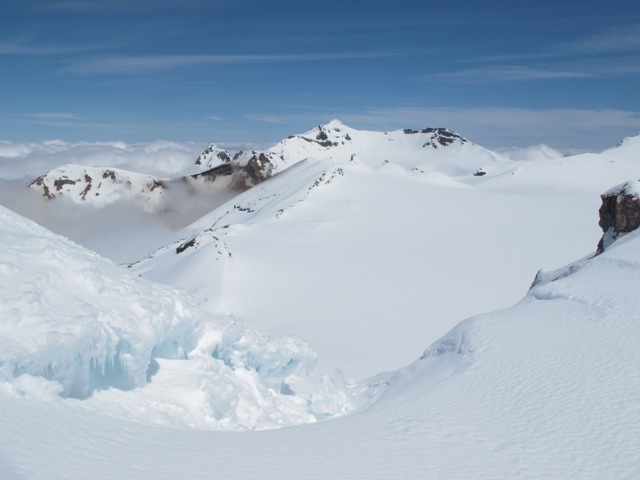 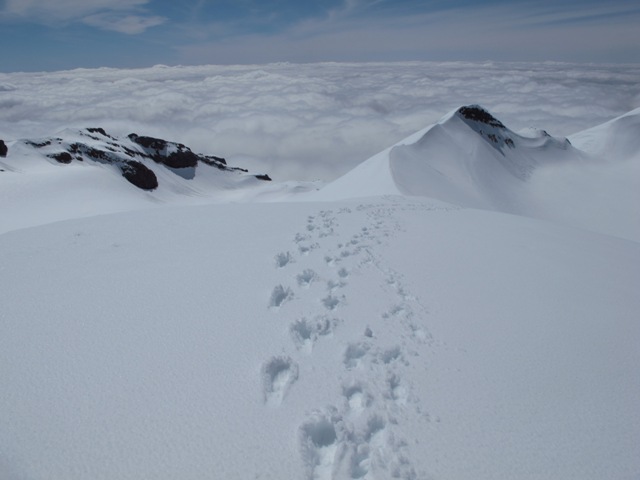 Sea of ​​clouds in Ruapehu

New Zealand is a place of huge volcanic intensity, as it is part of the Pacific Ring of Fire. They are constantly obtaining data like small earthquakes and volcanic activity. For example, Ruapehu crater is constantly monitored.

If the lake temperature drops steadily, it may be due to a blockage in the main chimney. This can cause a build-up of lava that can create a huge explosion when coming into contact with the cold water of the lake or the snow on the peak, as you can see in this video:

The loop around the volcano Ruapehu

The 2,797-meter Ruapehu volcano last erupted in 2007, and has had more than 60 episodes of activity in the past 60 years! It normally erupts every 50 years or so.

The Maori who lived in the area considered the mountains sacred and when they crossed it, they avoided eating or plucking any plants, and they tied leaves around their eyes to avoid looking at the mountain and thus avoid breaking the “tapu” and irritating Ruaumoko, the God of the underworld, which is the unborn child of the womb of Mother Earth or Papatuanuku.

Going around the mountain, a very beautiful 5-day trekking, you cross the valley of the Whangaehu river where you find this sign: 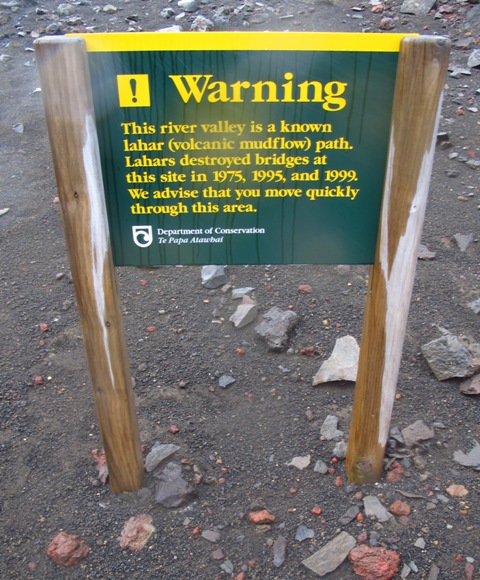 Warning on the Ruapehu loop

And after a few meters this other one: 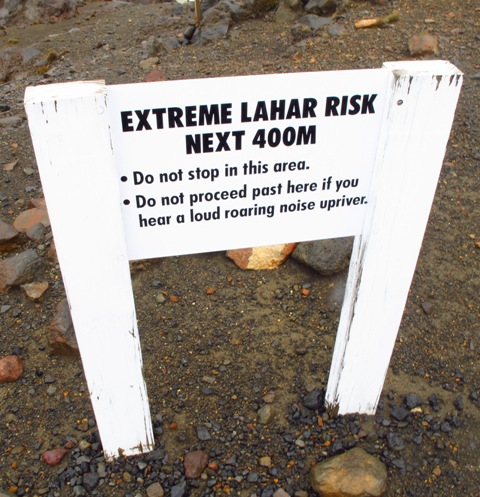 Mentally you know that it is unlikely that just when you pass through this area the volcano erupts, but a feeling makes you think: what if it erupts NOW?

And the ears are sharpened in order to detect the slightest buzz indicating a rash. The “lahars” are streams of mud with melted snow and ice from the lake above the crater, which moves faster than 50 km/h in the form of an avalanche when the volcano erupts.

The valley is as chilling as it is spectacular: an intense sulfur smell accompanies you all the time, and a river of murky waters flows down the valley sculpted by the “lahars”. 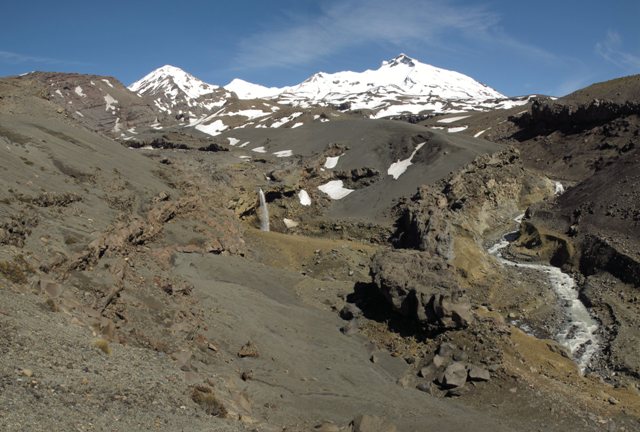 Valley through with a strong smell of sulfur

I know I have to cross quickly, but an immense fascination with the incredible force of nature makes me contemplate the valley and inevitably I want to explore more.

A great relief invades you when you cross the «hazard zone» and arrive at this other signal! Saved! 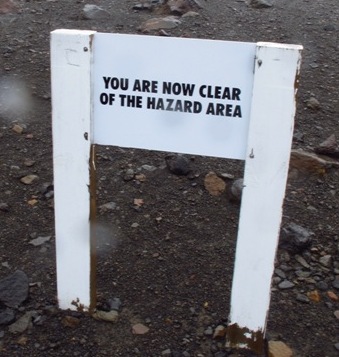 Warning of out of danger in Ruapehu

There are DOC shelters around the mountain, very comfortable and with mattresses. I did it in November and I did not see anybody! Here are some photos of this circular route: 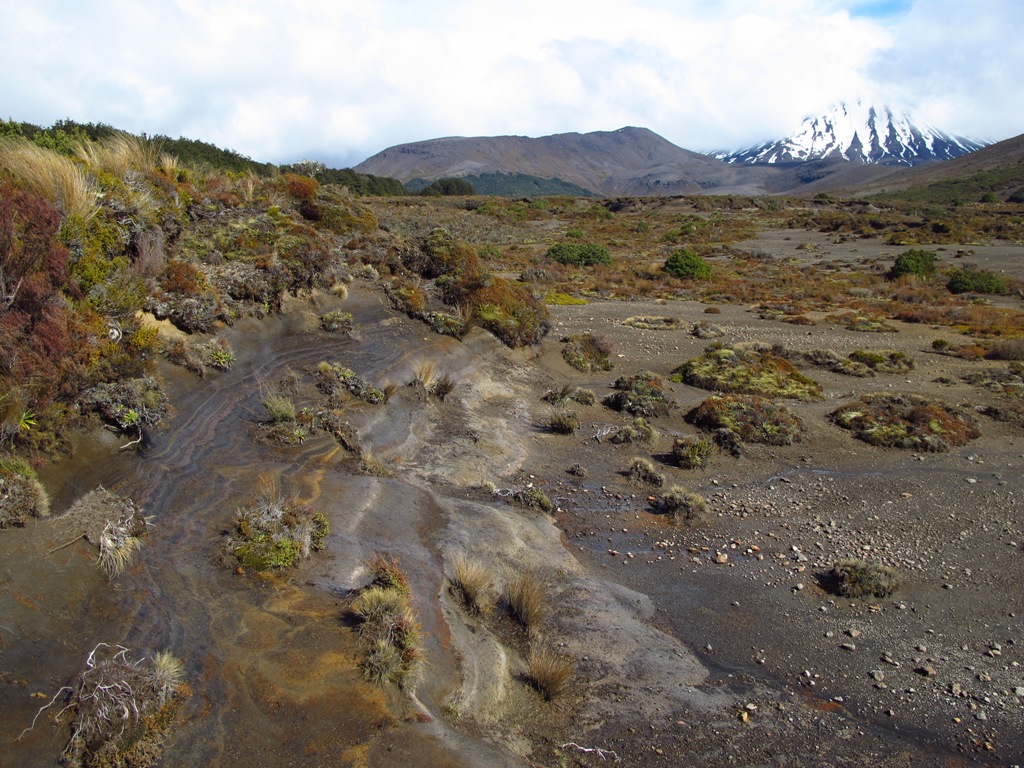 Layers of lava with Ruapehu in the background

Rainbow in the Rangipo hut 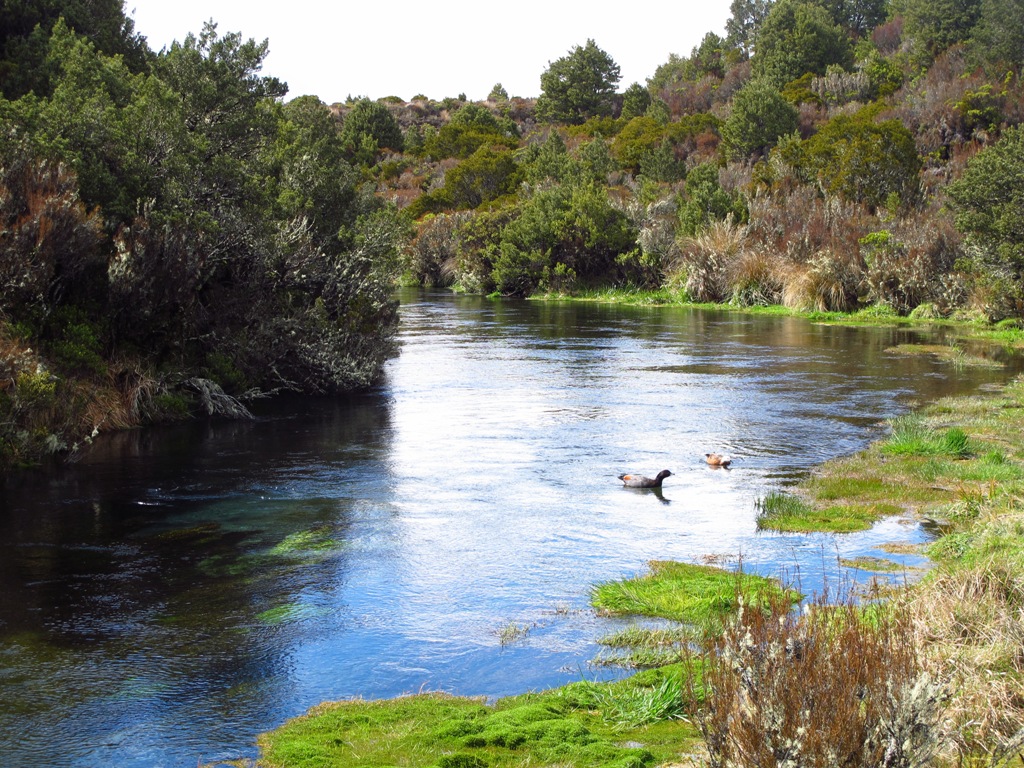 You can see more photos of the loop to Ruapehu here: https://photos.app.goo.gl/jjUnD454e4q1aj2BA

And you can find more info about this hike here: https://www.doc.govt.nz/parks-and-recreation/places-to-go/central-north-island/places/tongariro-national-park/things-to-do/tracks/round-the-mountain-track/

The most fun part of volcanic activity on the North Island of New Zealand is the “hot pools”. They are everywhere: around the area with more thermal activity (Rotorua), on beaches on the west coast (Whitianga and Hot Water Beach), on the east coast (Kawhia and Ocean Beach), in Northland …

The best ones for me are the ones that are free and in the middle of nature, like the ones at Huka Falls in Taupo, where a stream of hot water goes down to the immense and cold Waikato river, 100 meters wide, and you can change from one water to the other!

Pancho and Roberto soaking in the hot water river in Taupo

The ones at the hot water stream at “Kerosene Creek” near Rotorua are also fine, or the ones at “Hot Water Beach”, which looks like a setting from the book “Where is Wally.”

A crowd dig with shovels, frying pans and other objects to make a pool of hot water 2 hours before or after the low tide, combining the hot water that comes from underground with cold seawater to find the best temperature.

And suddenly a daring wave destroys the pool and the relaxed bather jumps and screams when he feels the cold water! It is almost more fun watching people than taking a bath! 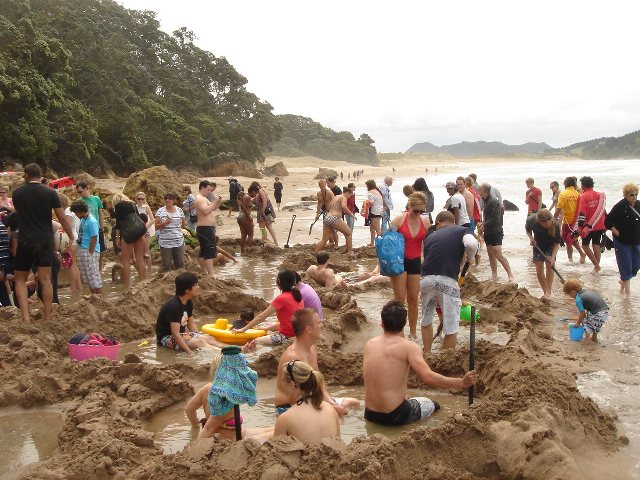 Show at the Hot Water Beach 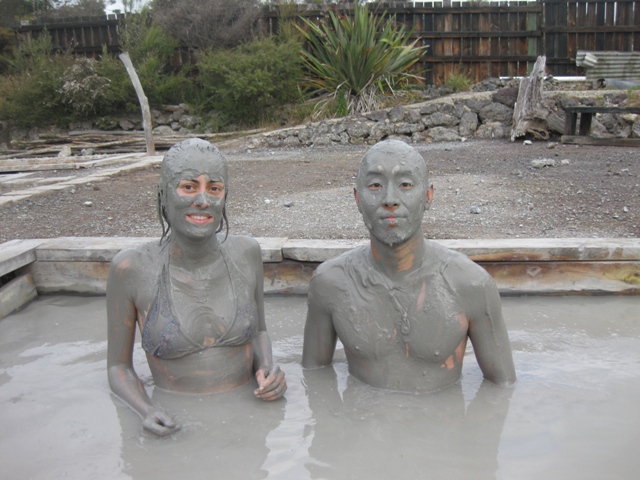 We were totally amazed to see a Rasta throwing buckets of water from the “Bulldog” pool on his head, at 51 °C, where we couldn’t even put our feet in for more than 5 seconds! Brave man, brave!