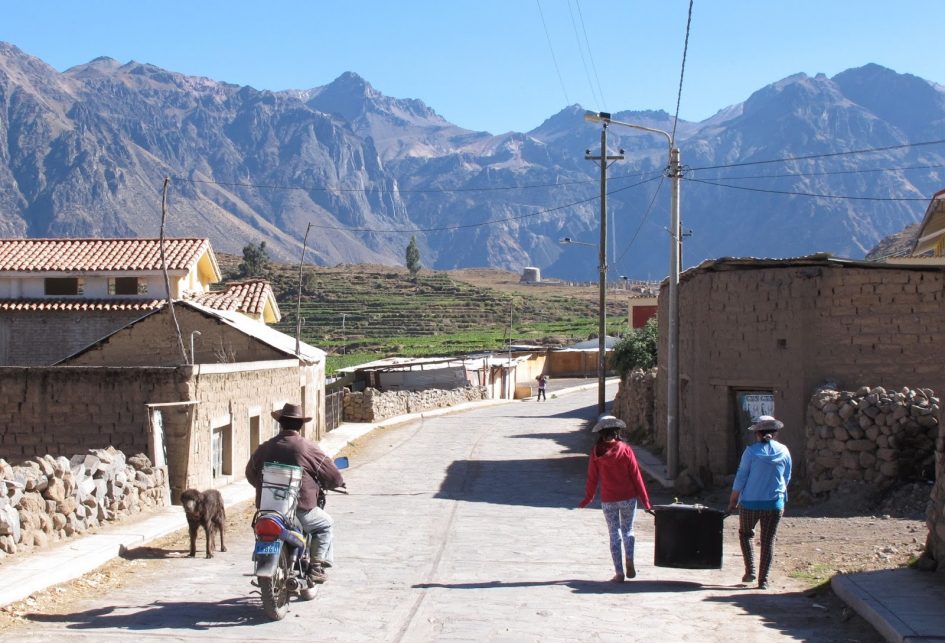 Once I have climbed the Misti, I organize myself to go to the Colca Canyon, the second deepest in the world with 4.150 meters, 165 km northwest of Arequipa.

Next to the “terminal terrestre” of Arequipa there are some vans that take me to Chivay (15 soles, 3h), passing almost 5000 meters above sea level, with vicuñas, alpacas, and llamas grazing. Vicuñas are a relative of the llama (camelids) that live wild at high altitudes and have hair on their chest that is highly valued for being a very fine and high-quality textile material. 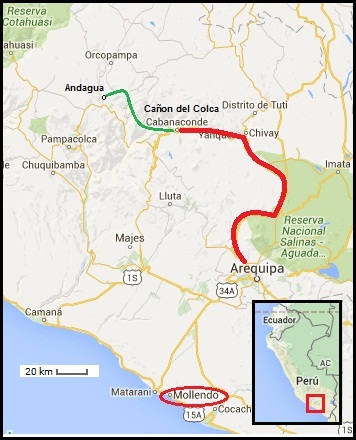 Areas of interest visited: Arequipa, the Colca Valley, Valley of the Volcanoes and Mollendo

Views on the way to Colca

From Chivay I take a bus and arrive at Cabanaconde, the Colca Canyon tourist base. It is a small town with animals on the street, children playing marbles, and women in hats and white clothes with typical embroidery of the Cabana culture. 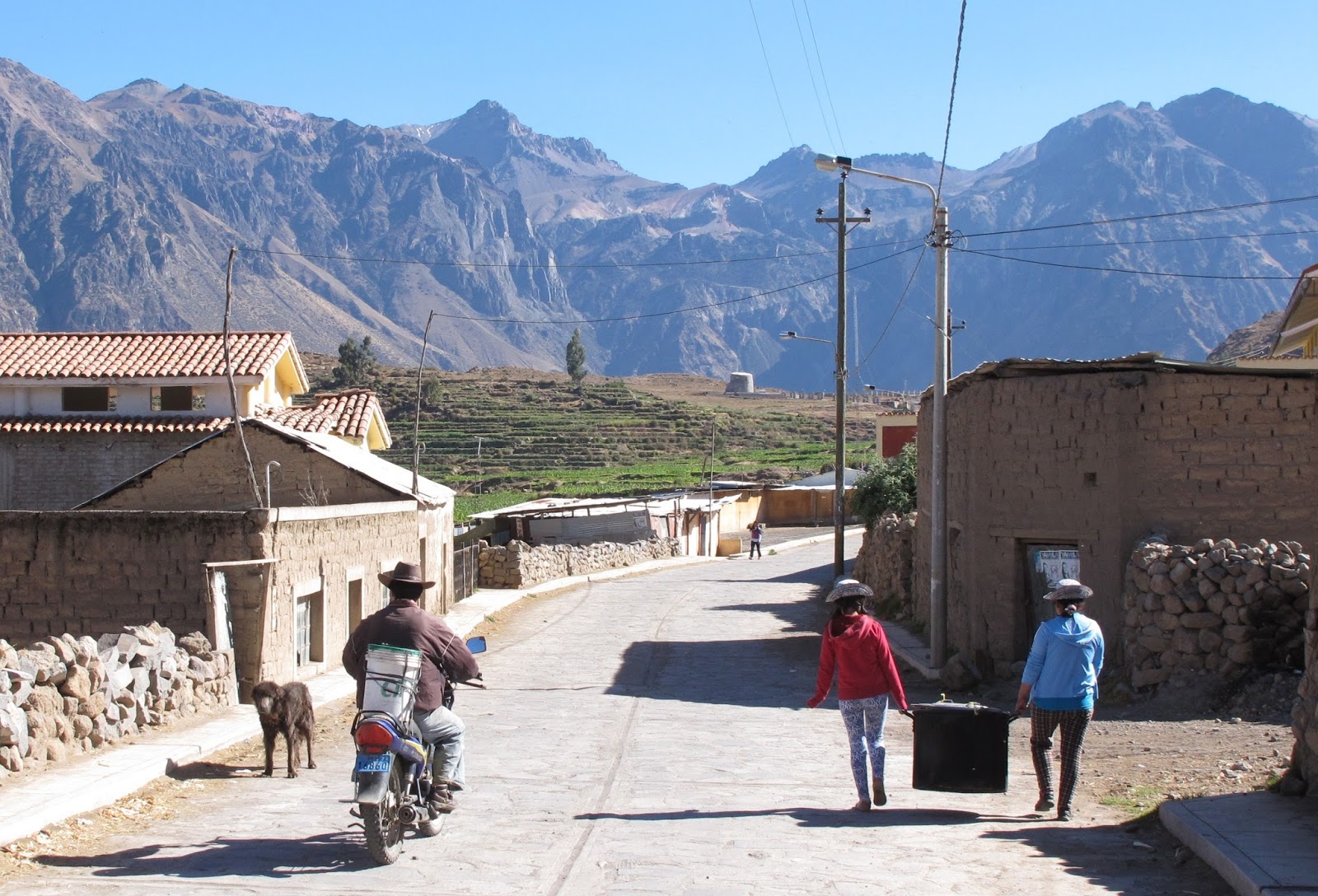 A two-day excursion through the Colca Canyon

The next day I leave at 7 in the morning (to avoid the sun) with a tent, a bag, and a stove to explore the Colca Canyon (there are also small hostels along the way to hike lighter).

I go from Cabanaconde in San Juan de Chucho, an impressive descent in a dry terrain full of cacti. Along the way I meet a boy with some mules, who is very excited because he has found an onion. He throws it at the feet of the mules to make them move faster and in 2 minutes the onion is destroyed.

He asks me why I have a beard and why I am so hairy. I tell him that this is how I am. I ask him what his name is, and he answers: “Pedro, Perrrrrooooo” (Pedro, Dooooooog). Not only that, but I ask him how is his school. He says to me: “feeeeeea” (ugly).

This child is a reflection of the landscape, arid, inhospitable and authentic, domesticated by the Incas through irrigation channels that transform the places where they pass into an oasis, making a beautiful combination of green and yellow.

When I get to the river, I find a boy fishing for trout with a net and his girlfriend. The local people work in agriculture, tourism, and collecting “cochinilla”, an insect that grows on cacti, highly valued for dyeing clothes. 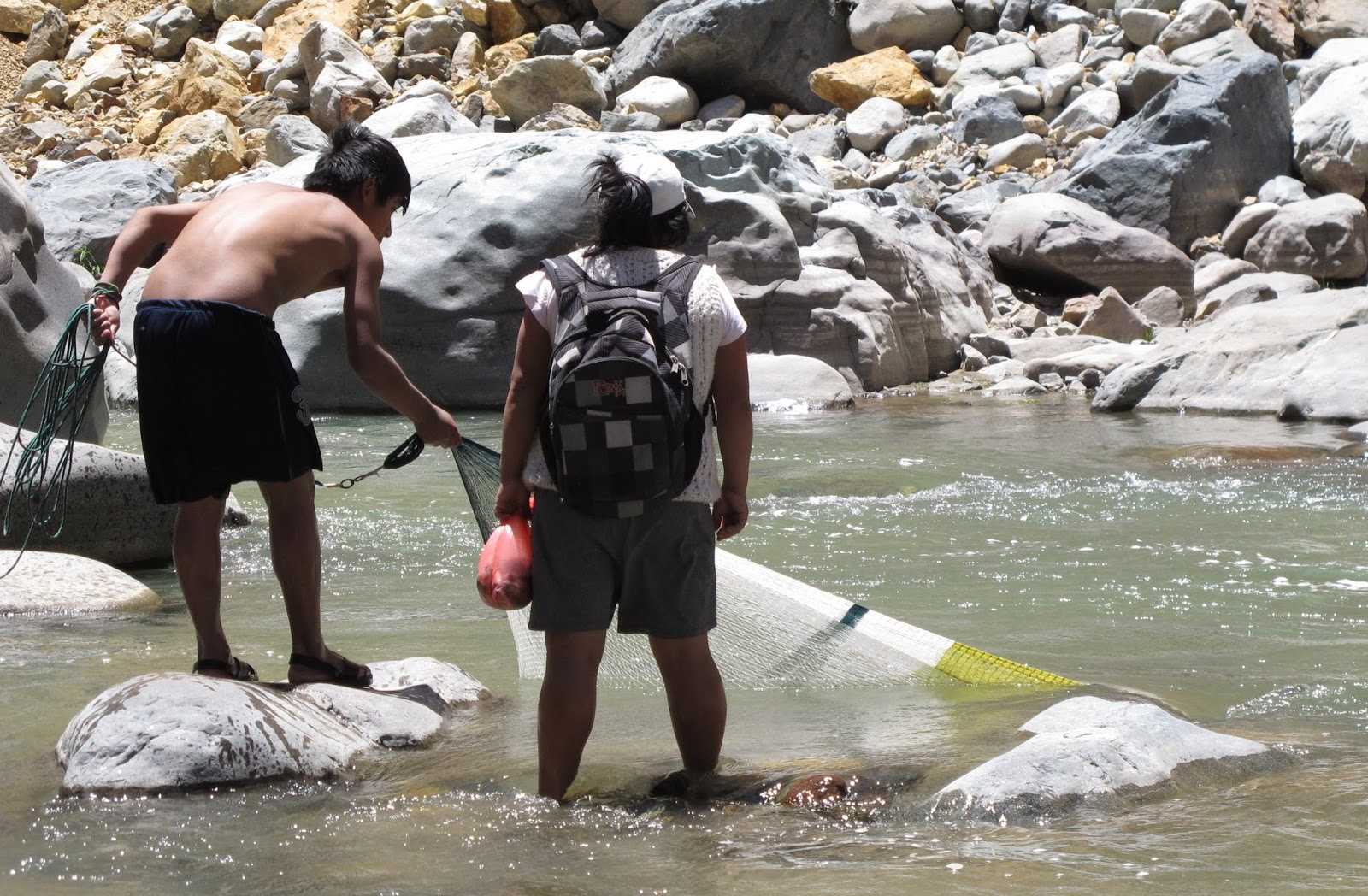 Couple fishing in the Colca Canyon

At noon, it is quite hot, and I settle under an avocado tree (“palta”) to play the quena, an Andean flute, and learn very useful phrases in Quechua such as: “Marsilina qaran Sarata wallpakunaman” (Marcelina feeds chickens). In the end, I end up camping right here, admiring the river at the bottom of the valley and a giant yellow wall in front of me.

The next day I go up to the town of Tapay where people greet me with a quick “Hello” but they are not very interested in interacting, they are tired of tourists, I think.

From there I go down to Malata and go to Oasis at the bottom of the “Canyon”, a big mistake, since it is a tourist trap, there are no local houses, only hostels with pools for gringos.
If you ever do this hike, I recommend you not to go to Oasis and from Malata to Llahuar, a town with hostels that has thermal pools, without losing height. From here you can return to Cabanaconde walking or by “car”.
Once I have swum in the pool and drank an “Arequipeña” in Oasis, I no longer want to go back up to Llahuar, and I go up with a guy from Madrid, an Irish and an Israeli to Cabanaconde, where we arrived boiling and celebrated with a well deserved “chela”. You can see a map of the area here: 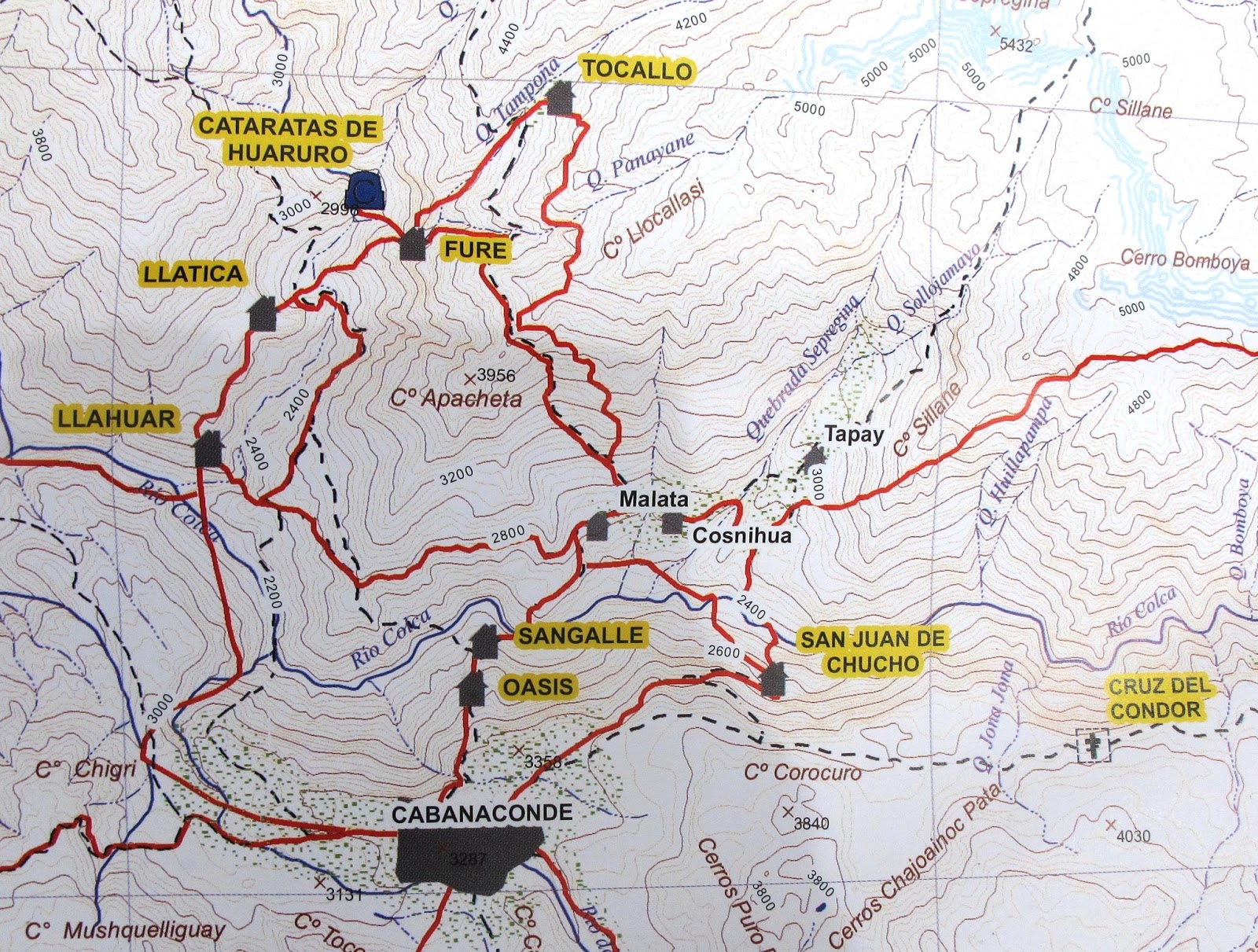 A visit to the Cruz del Condor

The next day I decide to take a rest day and take the 7 am bus to “La Cruz del Cóndor”. Next to me are two Peruvian hippies who are going to sell bracelets at this popular viewpoint, where people go to see condors. They are practicing Russian and I find it very curious and useless to learn Russian in such an isolated place in the middle of the Andes.

But when we get to the condor cross I understand why: suddenly buses loaded with Russians and Polish arrive, in the middle of nowhere! It is more fun to watch the tourists than to try to see the condors.

There is a nice path along the “Canyon” that is worth it and I see a good group of very beautiful flowering cacti, with giant hummingbirds (Patagonia gigas) drinking their nectar, an Andean woodpecker, and the Mismi glacier in the background. 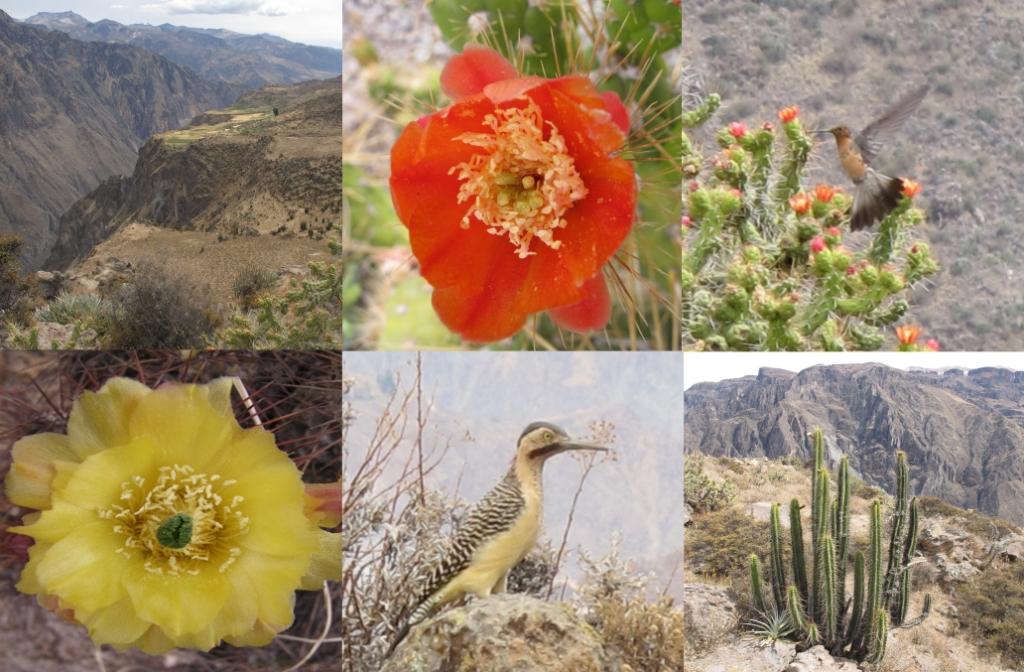 Fauna and Flora in Colca Canyon

In the end, after two hours, when all the Russians and Poles have left, a condor appears far away, and it looks so small that it looks like a fly.

The most fun part is going back to town. We get into a truck with all the vendors from the viewpoint, a family of French people who travel and a couple also from France and the hippies who speak Russian.
The ladies tell us the story that gives rise to a typical dance of the area, the Wititi. It turns out that there are two ethnic groups in the area, the Collaguas, and the Cabanas. The legend says that a Collagua boy fell in love with a Cabana girl, and that in order to be close to her, he dressed as a Cabana woman to be able to go to the dance and be close to her since then the dance has been done with men disguised as women. 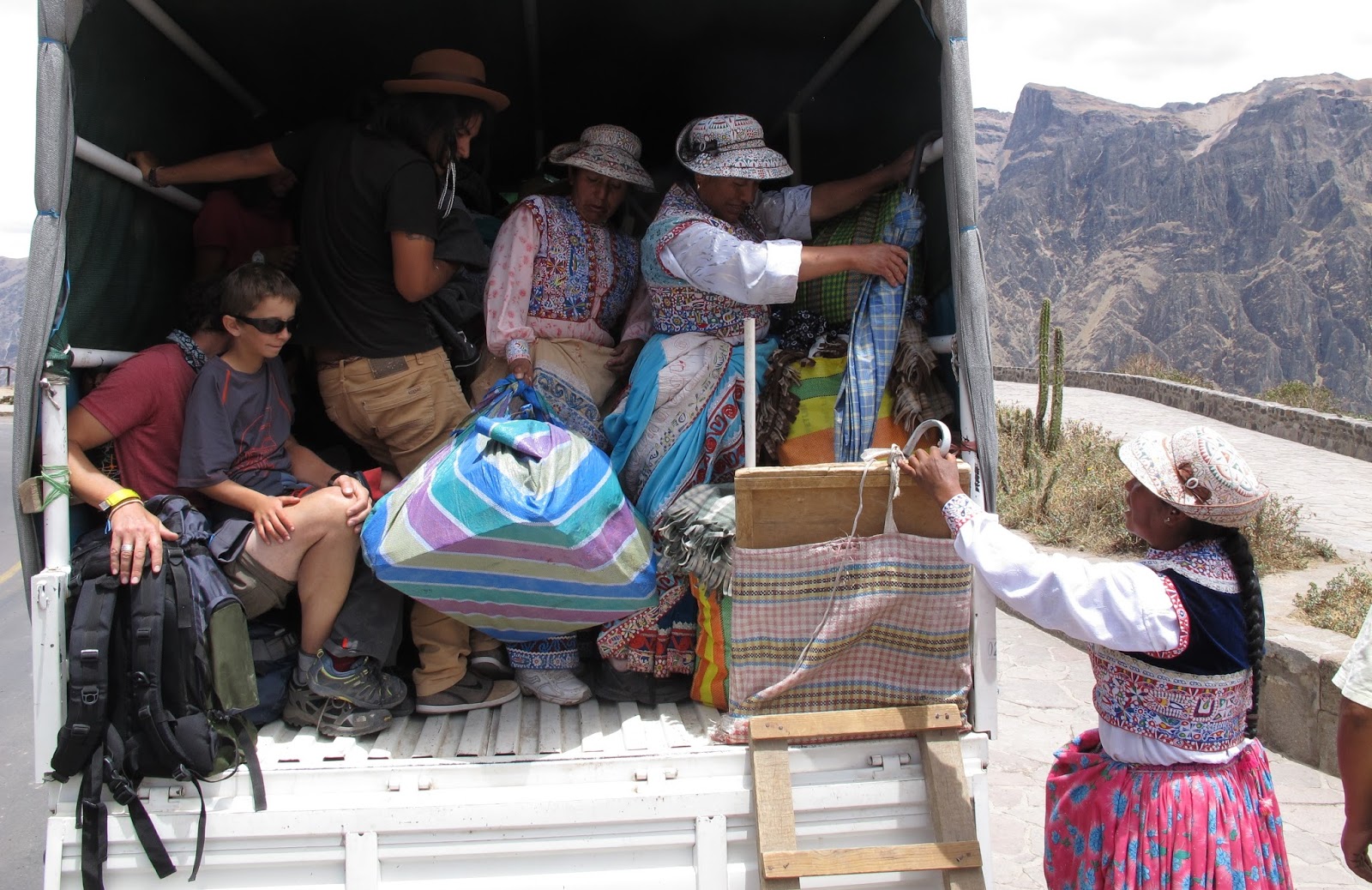 And the hippies play the quena inside the truck, and they do it wonderfully!