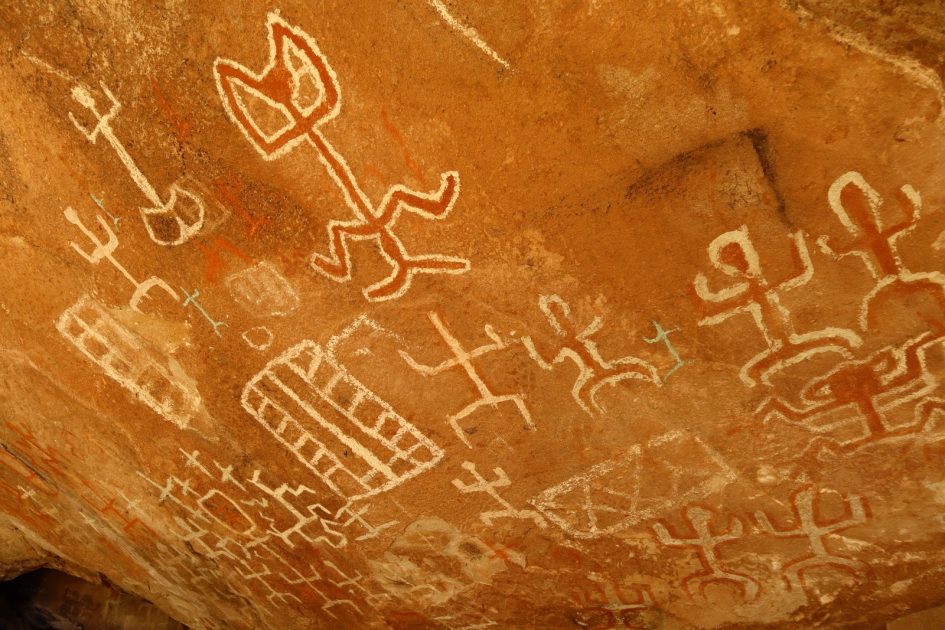 Sucre is a very pretty city, with colonial houses painted in white and fairly organized traffic. It also has a very interesting “mercado central“, where they sell typical dishes and food.
I take the opportunity to sightsee a bit: visit the Plaza de la Recoleta , with good views of the city, the San Francisco church, wherein 1809 the first bells of the sixteen-year war for independence rang, as well as at the Condor, a restaurant-NGO, and I drink beer in the hostel-cultural center Café Berlin.
The most interesting visit is undoubtedly the Casa de la Libertad. In 1825 the war for independence ended and in this building they discussed whether they wanted to be part of Peru, part of Argentina, or form their own state, which is the option that won. On August 6, the independence of the new state, Bolivia, was signed in homage to the first president, Simón Bolívar.
I found amazing the story of Juana Azurduy,  a fighter for independence who has only been recognized in the 21st century. 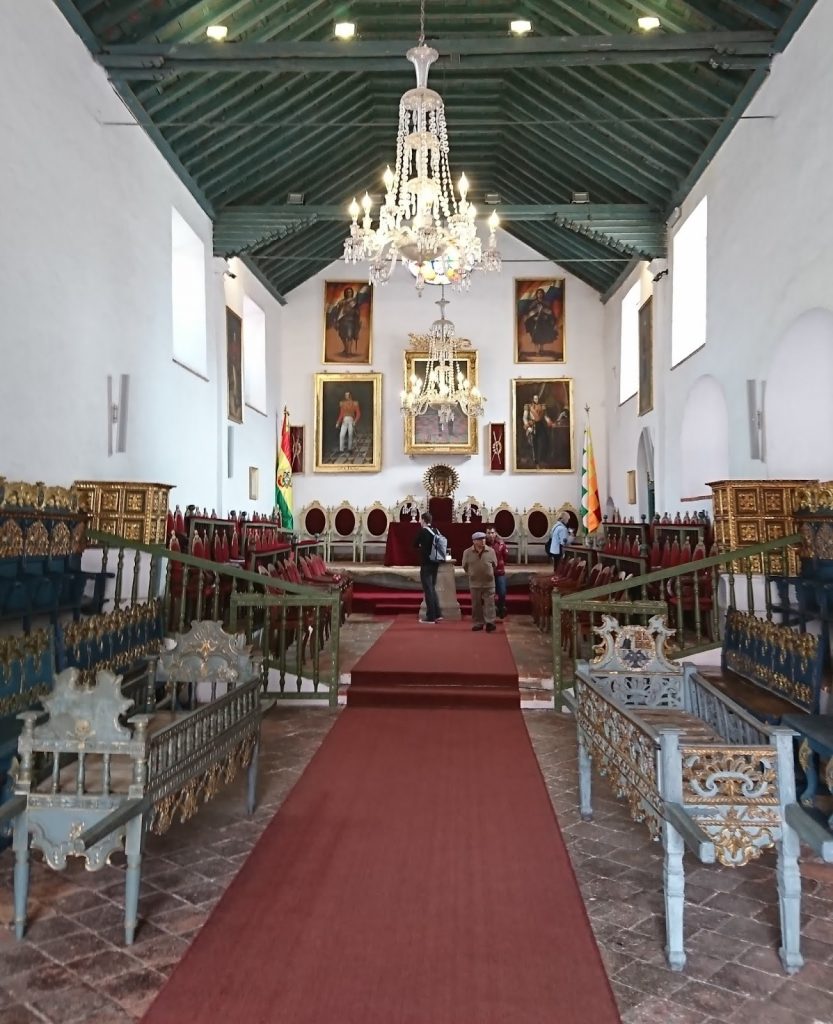 Hike of Maragua, 3 days and 2 nights

After visiting the city, I decide to explore the surroundings by going on a three-day walk. I take a bus to Potolo from near the “Mercado Campesino Sucre” and hike a route through Maragua, an ancient volcanic area, with dinosaur footprints and cave paintings.

After an hour and a half I arrive at the Capilla de Chataquila, where I get off the bus and start walking! You can see a map of the route here and also the link to ridewithgps and the track in wikiloc: https://ca.wikiloc.com/rutes-senderisme/ruta-capilla-de-chataquila-incamachay-maragua-ninu-mayu-potolo-98236068

First, I go north to make a round trip to Inca machay and Pumamachay , a total of 9 km. There are some cave paintings there that are about 2,500 years old, the first ones (Sauces culture), and the second ones are fifteen hundred years old (Huruquilla culture). The truth is that they look very fresh, I think someone has done an update recently!

Then I follow a part of “capac ñan“, the network of Inca roads that covered more than 30,000 km. It is perfectly restored and is a delight, a path hanging next to the mountain, supported by retaining walls with an ideal slope for travelers and “chasquis”, the Inca runners who carried messages. I take water from a river and take it with me for a few kilometers to camp, as it is a fairly dry region. 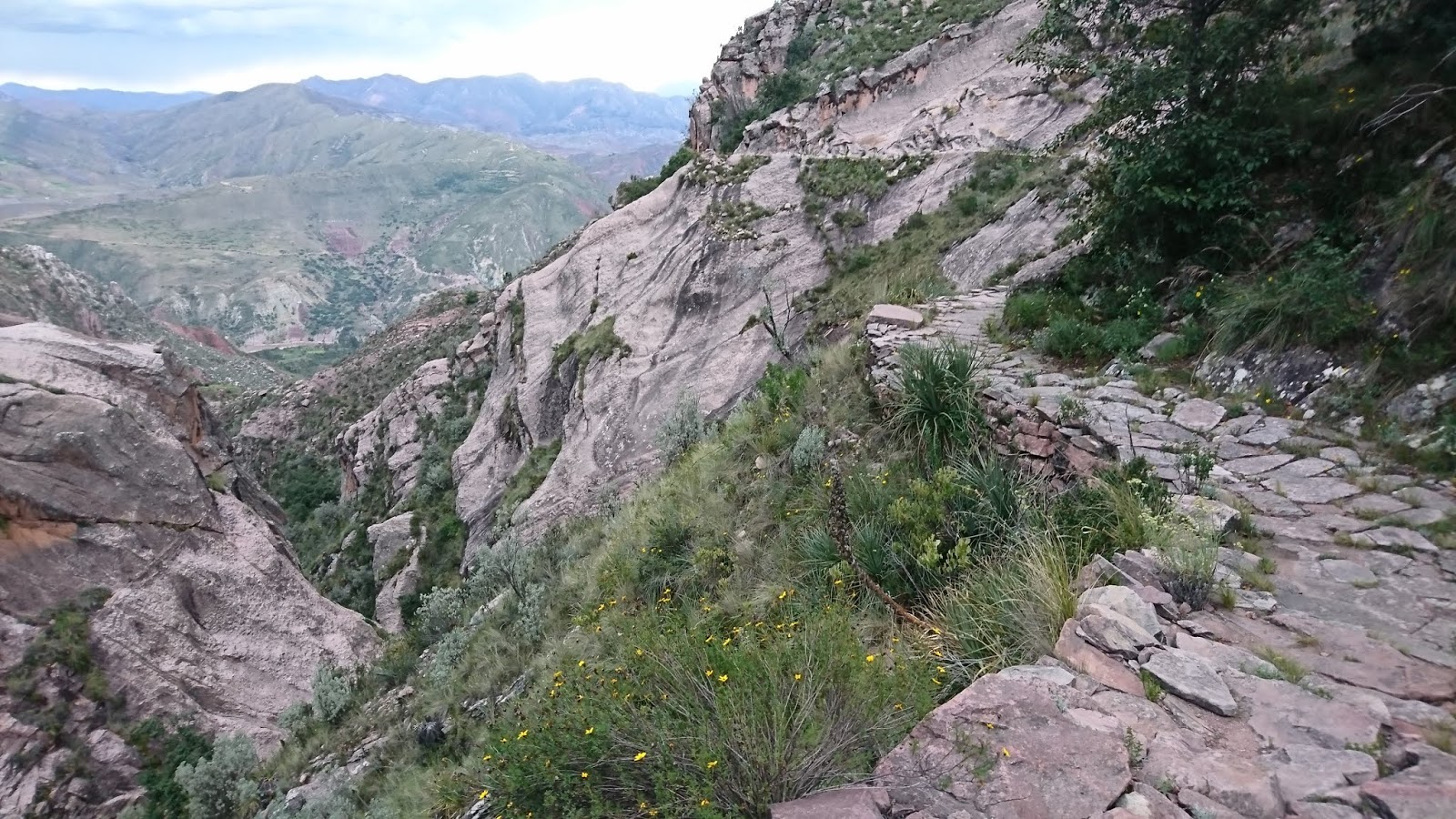 The next morning I continue the route arriving in Maragua, where the stores have almost nothing, and luckily I find pasta and tomato sauce! I continue along an unmarked route (thanks to maps.me and view ranger digital applications to guide me) until I reach the footprints of dinosaurs, sauropods, and ankylosaurs, in Niñu mayu . Here I ask for water again to camp a little higher up, with good views of the valley.

The next day I walk to Potolo to return by bus to Sucre. Potolo is a pretty little town that sums up the spirit of the area: people from the Jalq’a culture who work the fields and speak Quechua, with a large ball of coca leaves on their cheeks, who look between astonished and indifferent to the gringos we walk by backpacking through their town.

You can see more photos of this region here.