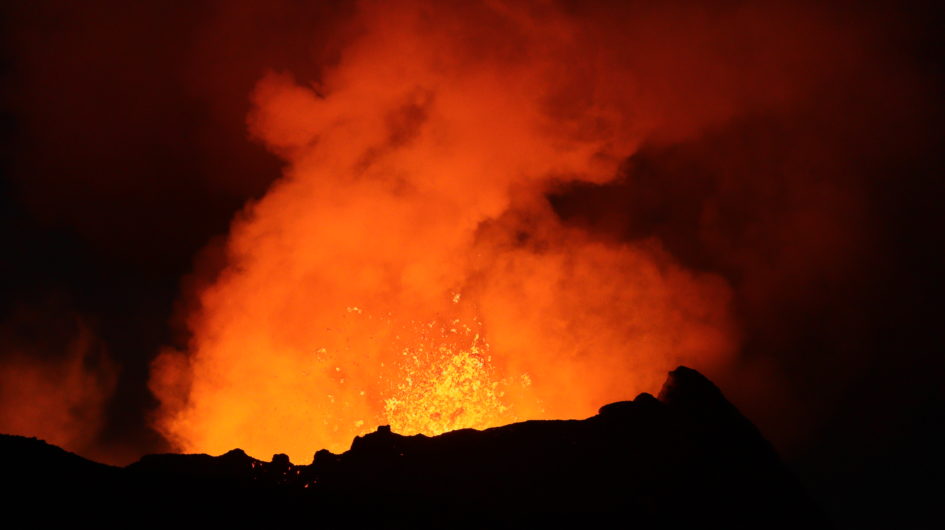 Iceland is one of the most volcanically active places in the world, it has about 130 volcanoes, 30 of them active. On average there is a volcanic eruption every 3 years!

This great volcanic activity has several reasons: in one side, Iceland is located between two tectonic plates, the North American and the Eurasian plates, which move apart by about 2.5 cm per year, or 25 km in 1 million years. A large amount of lava is emitted at this point, making Iceland a landmass of the mid-Atlantic ridge.

On the other hand, it is located on a hot spot, a place with magma at a depth closer to the surface than the rest of the earth’s surface, which favors volcanic activity. This “hotspot” is located exactly below the largest glacier in Europe, Vatnajökull, which is somewhat larger than the province of Barcelona, ​​with 7900km². 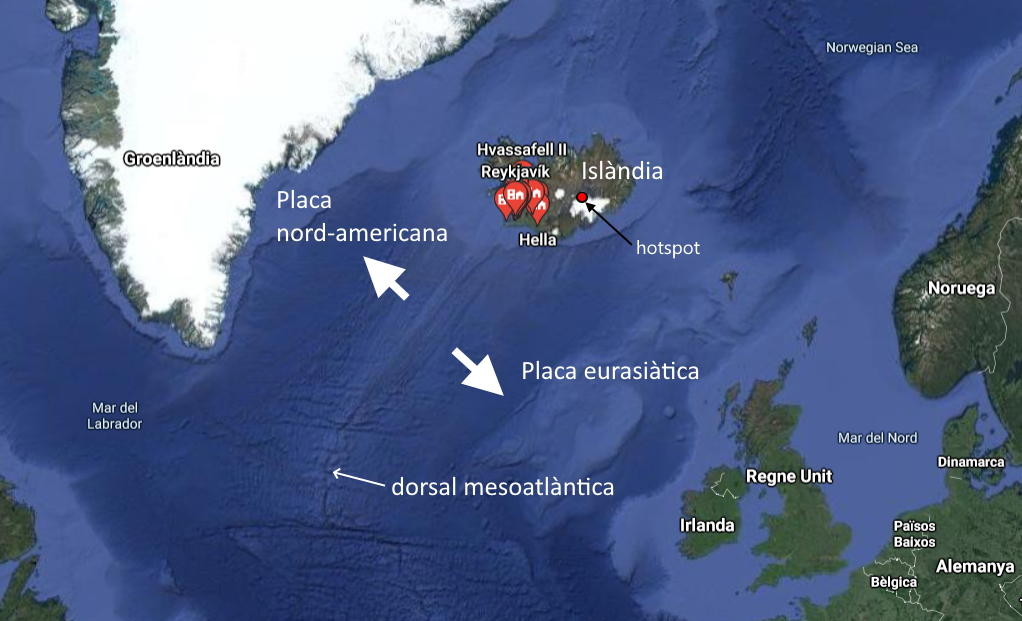 Iceland, a land emerged from the mid-Atlantic ridge

Iceland is a fairly young island in geological terms, it is about 16 million years old. The oldest materials can be found in the northwest and southeast, and the newest along where tectonic plates are moving apart.

This line includes 30 active volcanoes in various volcanic zones that have a certain regularity in their eruptions. Volcanoes are monitored by teams of experts and are usually preceded by thousands of earthquakes in a given area. In any case, there are dozens of earthquakes on the island every day, which can be found on the vedur earthquakes page.

Next, we will see some of the volcanoes that have most caught my attention, which you can locate on this map: If one volcano has made Iceland famous, it is the Eyjafjallajökull stratovolcano (pronounced  [ˈeiːjaˌfjatlaˌjœːkʏtl̥]). The name is pretty unpronounceable, but breaking it down into its three component words makes it easier! Eyja (island), fjalla (mountain) and jokull (glacier), which would mean “the Glacier Mountain of the Islands”, referring to the Westman Islands nearby the volcano. You can also call it E15, the first letter of the volcano, and 15 more letters!

This volcano erupted in March and April 2010, stopping air traffic in Europe. After the economic crisis of 2008, the Icelandic banks owed a lot of money to the English banks. Icelanders like to joke that the English asked for their money back (give the cash back!) and that they understood “give the ash back”. And that is why they sent them ash from the volcano!

The volcano is located under the glacier that has the same name and generated large floods of ash mixed with lava, which luckily followed the course of the river and did not affect the farms too much. You can see a video of the eruption here!

If you want to visit the volcano, there are tours that take you, especially with the company South Coast. It is also very good to walk through Thorsmork , an area with many trekking options with views of the volcano. You can get there with South Coast, or on your own with the Reykjavik Excursions. 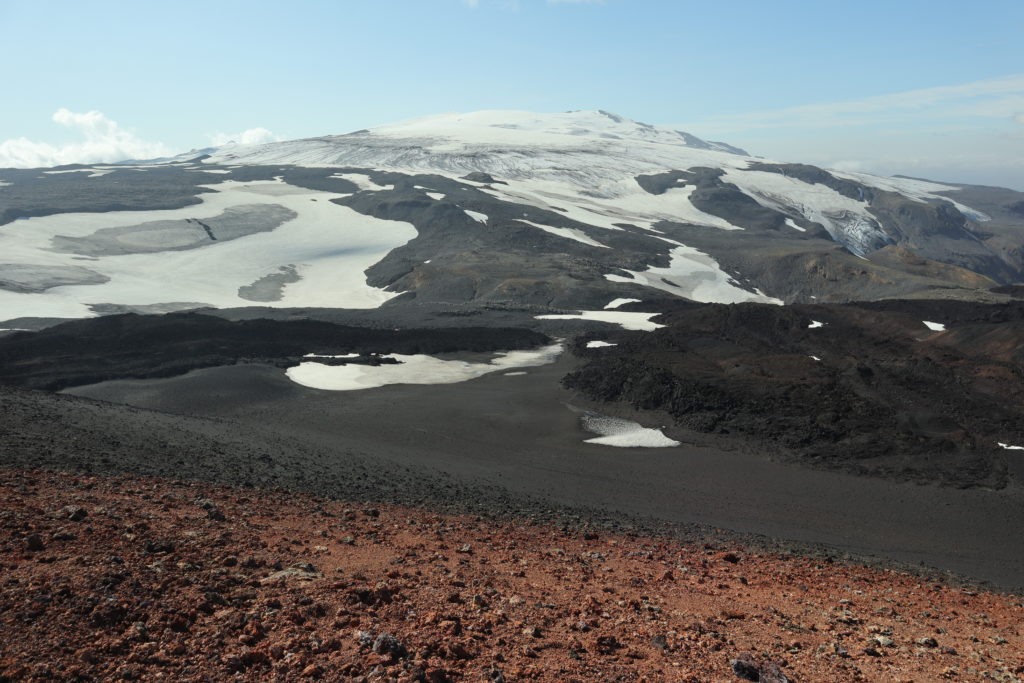 Eyjafjallajökull from the Fimmvörðuháls trek

This volcano is located under a glacier on the Snæfellsnes peninsula , considered to be Iceland in miniature, as you can see a little of everything in a small area: glaciers, fishing villages, volcanoes, and waterfalls. Its name means: “the glacier of the snowy mountain”. As you can see, they haven’t racked their brains too much over the name! It last erupted about 1,800 years ago.

The volcano inspired Jules Verne, since it is through it that the characters in “Journey to the Center of the Earth” (1864 novel) access the interior of our planet.

It is an easy summit to climb in summer… if the weather is good. The volcano is visible from Reykjavík, but it is often covered in dense cloud. The outward route is almost 5 km and about 800 positive meters. You can find the track of the excursion here: wikiloc route to Snaefellsjokull.

To go up you have to access a dirt track up to this point. After this you can follow the tracks of the wheels of a vehicle that transports people to the top. It is important to follow these marks to avoid falling into the crevasses of the glacier. I went up without crampons since the snow was soft. In about 2 hours you can reach the top, and if the visibility is good it offers spectacular views. Views of the top at the beginning of the ascent 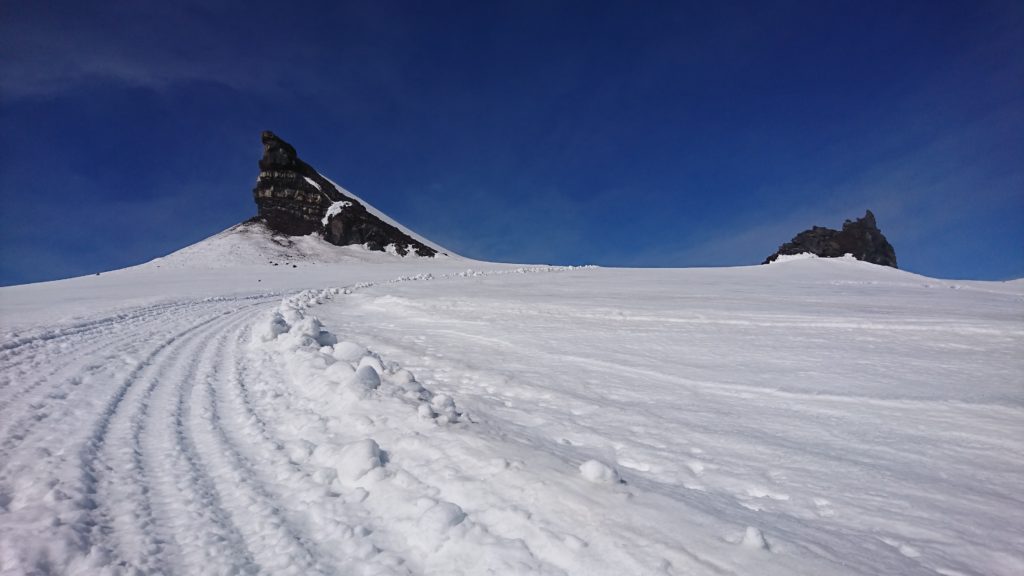 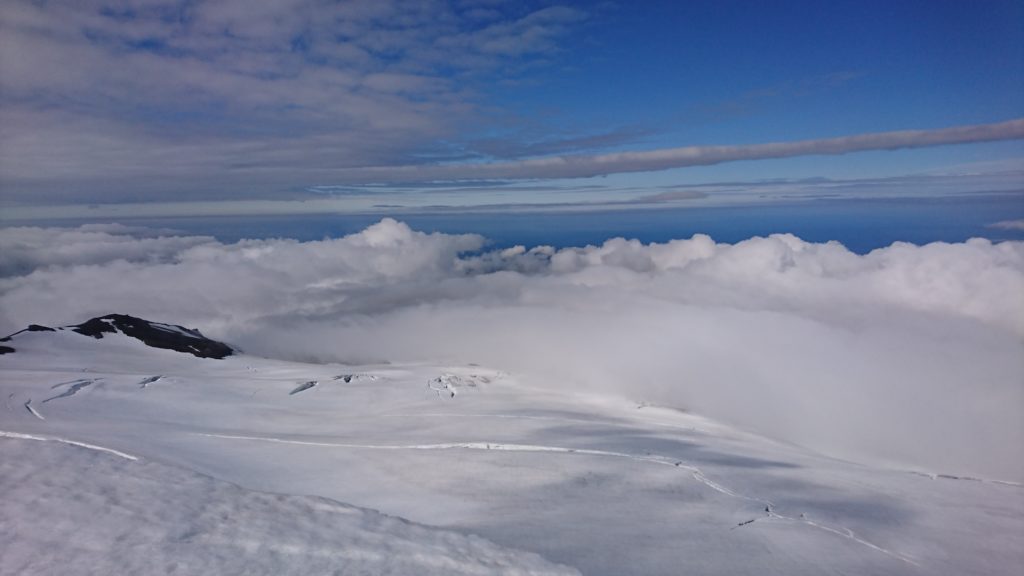 Westward views from the top

Fagradalsfjall is the name of the mountain where the eruption began on March 19, 2021. Just 35km from the capital Reykjavik, it’s like having a volcano in your backyard!

After 6,000 years of inactivity, a fissure opened in the area creating an effusive-type eruption (lava flows continuously, like a river). The eruption ended after 6 months, on September 18, 2021, although volcanologists thought that the activity could continue for several decades and could form a shield volcano. Things of nature! Who knows, maybe one of these days it will become active again, and the eruption will continue! We went to see it on July 10, 2021 and we were amazed! The volcano erupted every 10-15 minutes, accumulating lava in a cavity, and after a few minutes, it descended in the form of a river through the valley. Incredible! You can see a video of the adventure here:

Little joke with Hekla! Since the arrival of humans, 874 AD, has erupted 23 times! In the last thousand years, it has been one of the volcanoes on earth that have emitted a greater volume of lava, with 8 km³, being the third most active volcano in Iceland.

In the 12th century, monks described it as the entrance to hell or the prison of Judas, and there are legends that witches gather on the slopes of Hekla for Easter and that ravens flying backward enter the crater.

It erupts on average every 20 years and its lava has a different composition from that of the rest of the lava from the volcanoes of Iceland (basaltic andesite rich in fluorine), being quite toxic to livestock. And what makes it more fearsome is that it only shows signs of imminent eruption 5 to 10 minutes before the eruption.

You can watch this interesting video summary of the year 2000 eruption below!

As you can see, the more time that passes between eruptions, the more destructive the volcano is. Now it has been erupting for 20 years, so the eruption could happen at any time. For now I have no intention of climbing this volcano!

Katla is a volcano that historically erupts every 50 years! The last major eruption was in 1918, although there have been smaller eruptions in 1955, 1999 and 2011. It is a major emitter of CO₂ into the atmosphere, accounting for 4% of the planet’s emissions.

This volcano lies below the Mýrdalsjökull, and makes it especially scary because the eruption melts the ice above it, creating a “jökulhlaup” or glacial collapse. This happens because the magma melts the ice and creates a large accumulation of water that the rock or the glacier itself supports. When the ice breaks up, it releases large amounts of water that sweep away everything in its path.

That makes it one of the most feared volcanoes, since its eruption could flood large areas of land around it, including the town of Vík and several surrounding farms.

Grímsvötn is a volcano that is below the Vatnajökull glacier. With a 35 km crater, it is the most active volcano in Iceland. This volcano produced the Laki fissures, which in 1783 caused an eruption that lasted 8 months and affected the climate worldwide. This eruption was the largest effusive eruption of the last millennium, where 15 km³ of basaltic lava was expelled from the volcano, accompanied by huge volumes of sulfur dioxide and hydrofluoric gas.

In 1996 there was an eruption that destroyed the section of the road that passes near this volcano, as you can see in this video:

You already know, if you want to see volcanoes, Iceland is your place!

Catalog of active volcanoes in Iceland, with data on their eruptions and photos: http://icelandicvolcanos.is/