Bike adventure to the Laki volcano 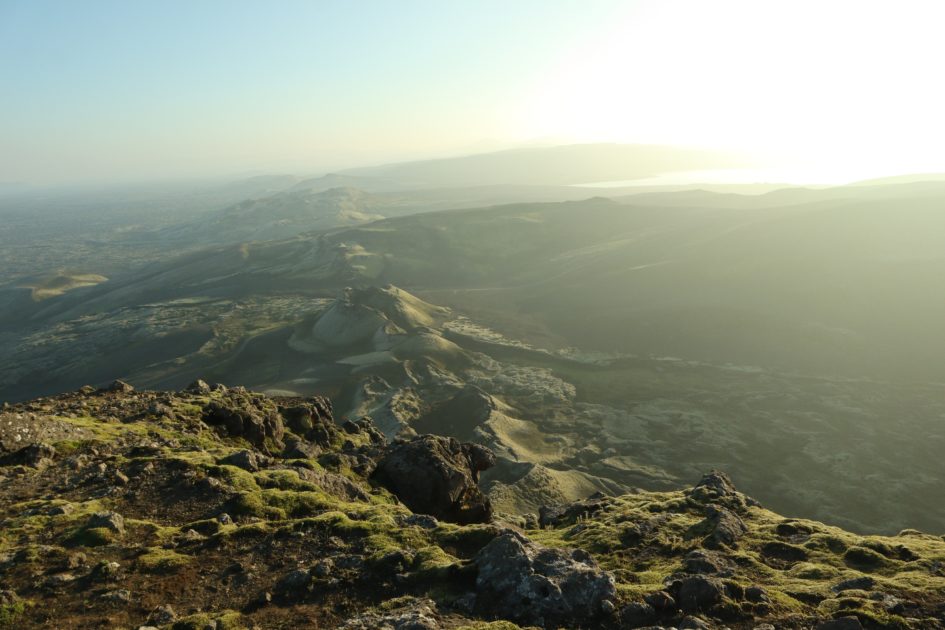 With Lara and Charles, we decided to explore the volcanic area of ​​Laki by bike. It is an inaccessible area, with spectacular landscapes and untamed nature, which hides a tragic past.

In 1783 there was an 8-month eruption that affected all of Iceland, killing 50% percent of the livestock and 25% of the island’s population. Is spread to the rest of the world, changing the monsoons in Asia and cooling the temperature in Europe for years!

Here you can see a video of the bike adventure, and below, information on the route and the 1783 eruption.

Technical data of the adventure to Laki by bicycle 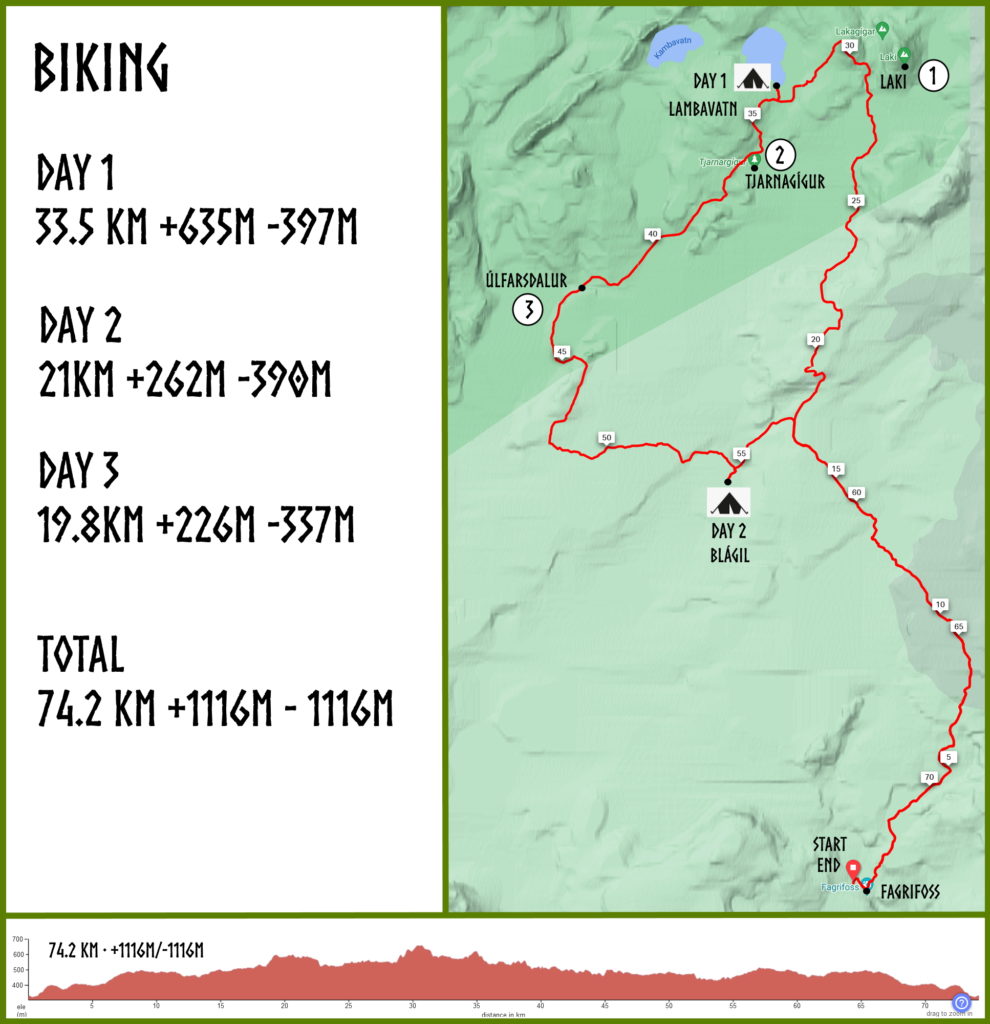 Detail of the bike route to Laki 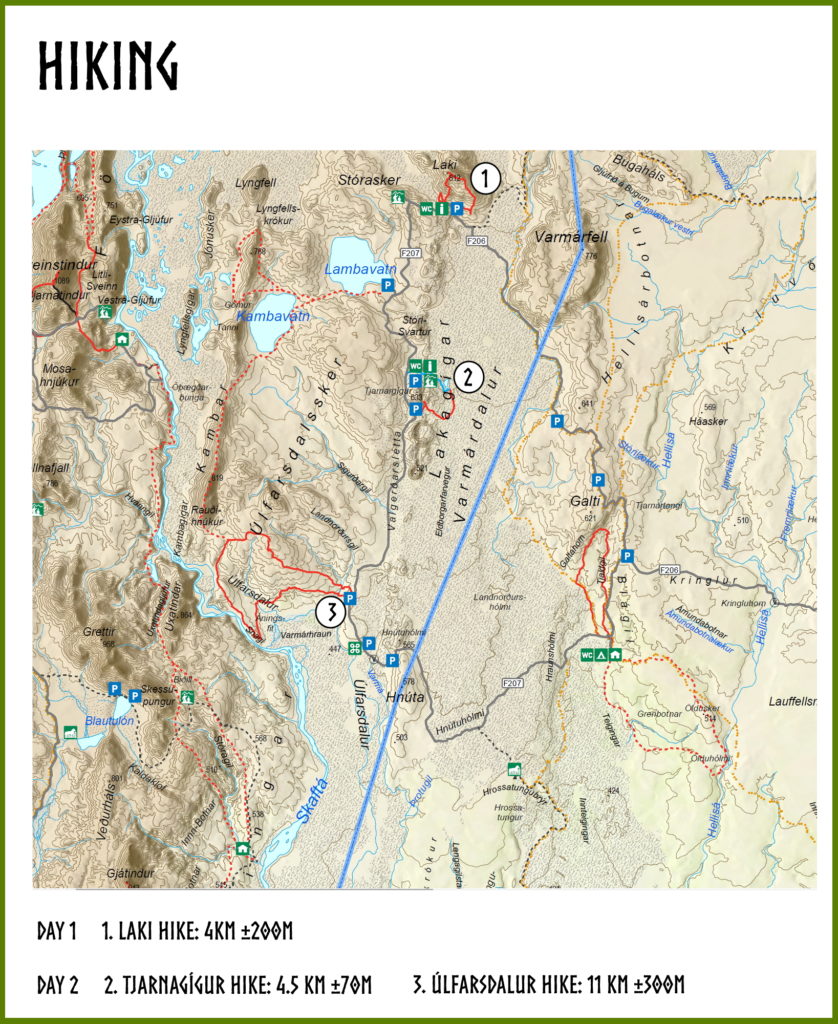 Detail of the walking tours in Laki

On June 8, 1783, a 25 km fissure with 130 small craters opened in the area of ​​Mount Laki, in the midst of large explosions. During 8 months, lava fountains between 800 and 1400 meters expelled 42 billion basaltic materials that circulated to the sea, as well as toxic clouds of hydrofluoric acid and sulfur dioxide.

Associated with the Grímsvötn volcano, which lies under the Vatnajokull glacier, this eruption was a catastrophe for Iceland, with 50% of livestock dying from poisoning and a famine that killed 25% of the Icelandic population.

A clergyman who lived in the area, Jón Steingrímsson, gave a detailed account of the entire eruption and the harshness with which the inhabitants suffered it, and has served scientists to study it. They even baptized him as the “fire priest ”, since he delivered a sermon as the lava approached his church, and miraculously the temple was saved from being engulfed by the lava.

Laki’s influence crossed borders: this great toxic cloud moved through Europe following a high pressure system, circulating first towards Scandinavia and Austria, to later move towards France and England. This caused first a very hot summer and later several very cold winters, which caused crop failure for a few years. They think it might even have been a trigger for the French Revolution!

It also altered rice harvests in Japan and affected the monsoons in India and Africa, causing less rainfall and famine along the Nile River. An estimated one million people died in Japan and one-sixth of Egypt’s population died of hunger. 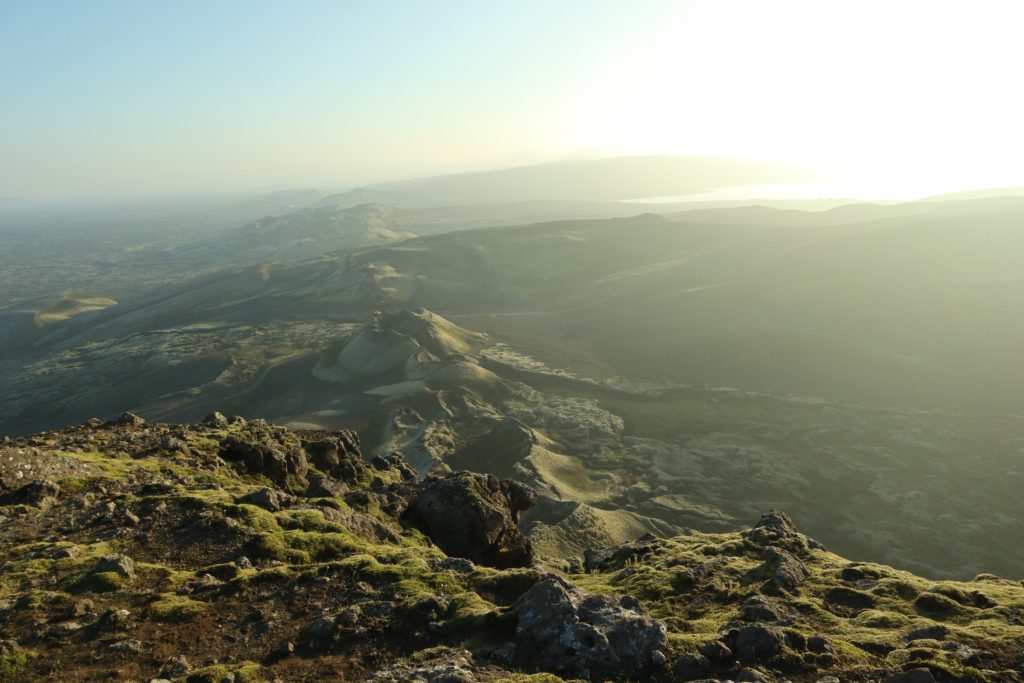 The first day we drove from Reykjavík to Hunkubakkar farm, stopping in Vík to eat something and shop at the supermarket, it took us about 3 and a half hours. Then we continue 16 km along the F206 road, crossing a shallow river until we reach the Geirlandsá River, where we park the van.

The idea of ​​doing this bike route is to be able to cross a few rivers, which otherwise must be done with a 4×4 vehicle. We packed all our gear and crossed the river, some wearing socks and others flip-flops! As soon as we cross, we find the picturesque Fagrifoss, elegant and serene, welcoming us to the adventure.

Then we continue along a rocky dirt road. Our bikes have a 32 mm tire, which is not very suitable for this route, and means that we have to push the bike in some sections. If you have a mountain bike or a “fat tire bike”, it will be much easier!

It’s sunny and there are some nice lenticular clouds on the horizon, and soon we reach the second river. Rivers in Iceland should never be underestimated, but in the conditions that we did the route, we had no problems crossing any river, they were quite low. 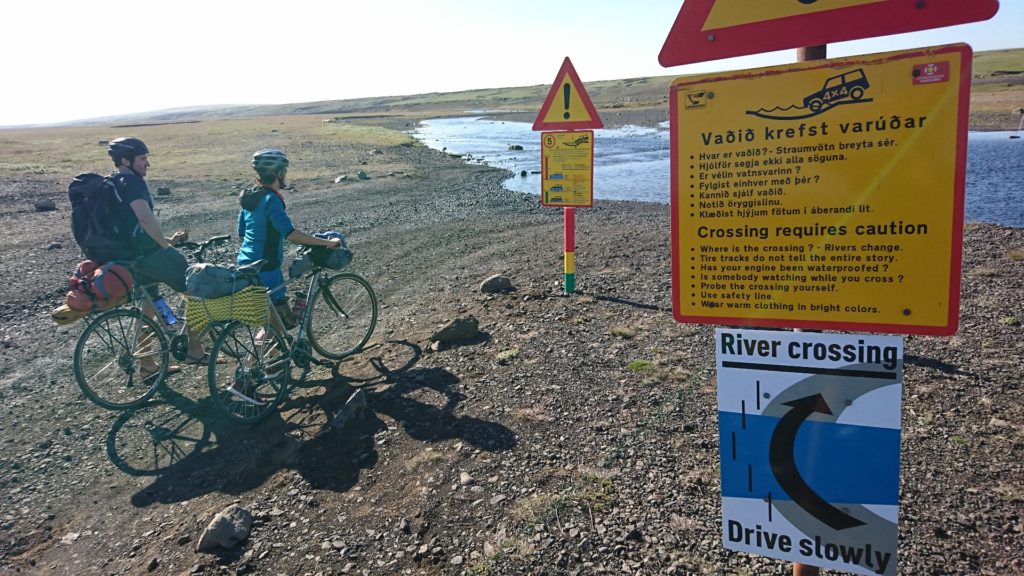 We continue on an upward trend over uneven terrain until we reach a plateau, and there we begin to see the lava fields of the eruption in the distance.

Shortly after we arrive at a site with information panels on the eruption of Laki and toilets. It turns out that Mount Laki is not part of the 1783 eruption, but was created 20,000 years ago by an eruption under a glacier! That is why the rock is hyaloclastite, with a rather brownish color.

We take a tour inside an old crater and climb to the top of Laki (818 m), from where we see a row of volcanic cones that make up the fissure of the 1783 eruption. We are amazed by the landscape, it is wonderful! !

Then we continue by bike, while we watch the sunset, to Lake Lambavatn, where we decide to camp. At 9 pm, when we have already set up camp in the parking lot, near some picnic tables, a four by four from the National Park appears. We think we’ll get a huge fine for camping outside a licensed location!

But a tall blond guy called Benedict gets out of the car and tells us that we can camp there, that one night is allowed outside the authorized campsites if people travel by bike or on foot. And not only that! He shows us a map of the National Park and explains all the paths on foot that we can do the next day. Incredible, it looks like an elf appearead out of nowhere!

We say goodbye to Benedict, asking him if they have beer at Blágil’s camp the next day. He tells us that they don´t, but he says he’ll see what he can do! We fall asleep very quickly after an intense day.

The second day wakes up cloudy, but it is an ideal day to explore the area.

First we go to the Tjarnargigur area, where we hike from this crater to Eldborgarfarvegur. In this area there are toilets and information panels. Tjarnargigur is a fantastic lake located inside a crater, and we are once again amazed walking along the designated paths (the mosses are very fragile and cannot be stepped on). 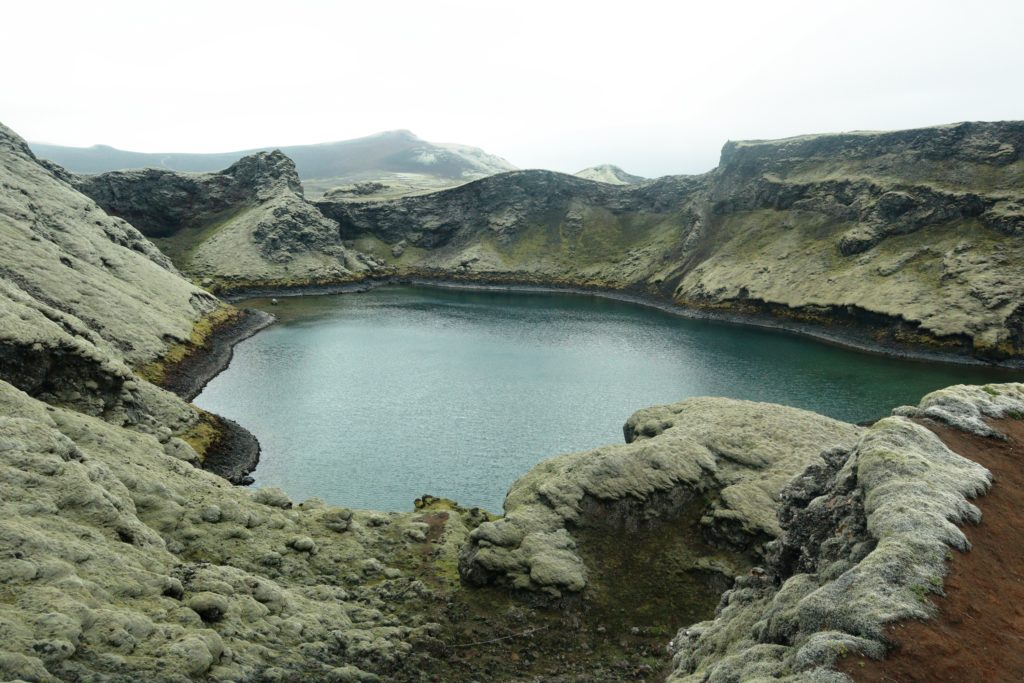 Afterwards, we cycled another 6 or 7 kilometers until we reached the Úlfarsdalur hike. We leave the bikes propped up on wooden posts (no chains are needed in Iceland, nobody touches anything) and we do an amazing circular walk: we see clouds of dust rising from pseudocraters in the distance, an incredible waterfall, green and brown landscapes, wonderful! It is a path that has recently been marked with yellow poles, and it is worth it! 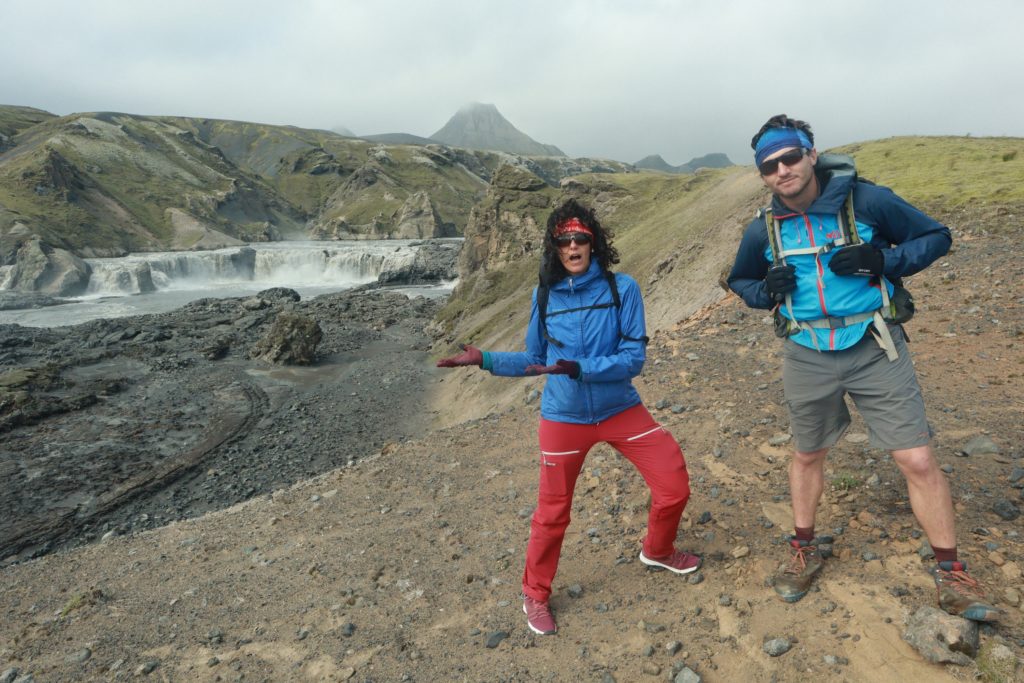 Amazed with a waterfall in Úlfarsdalur 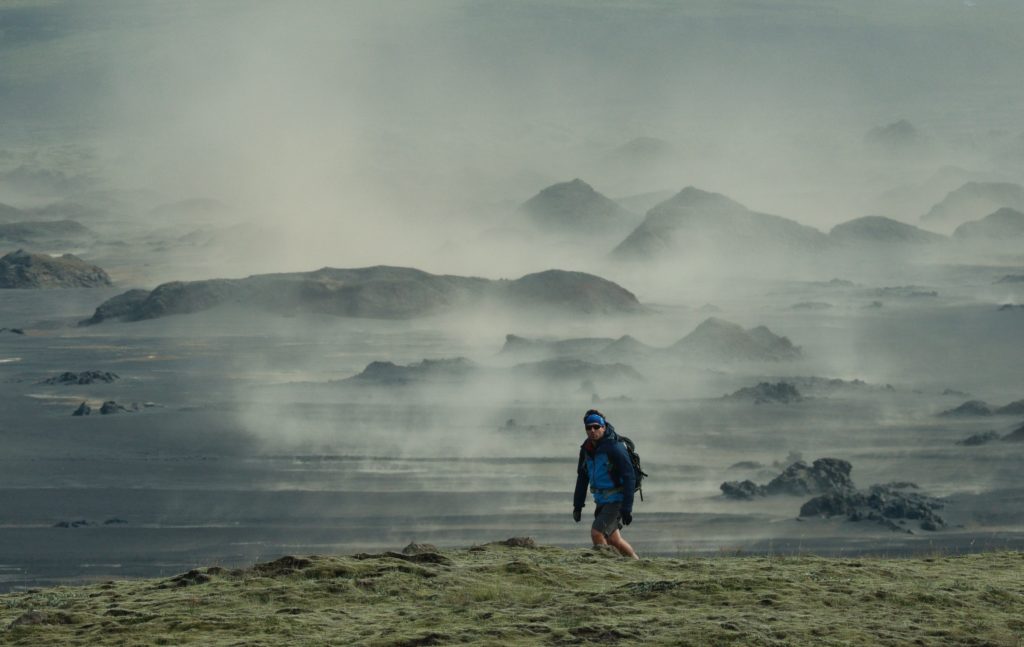 Charles and the pseudocraters 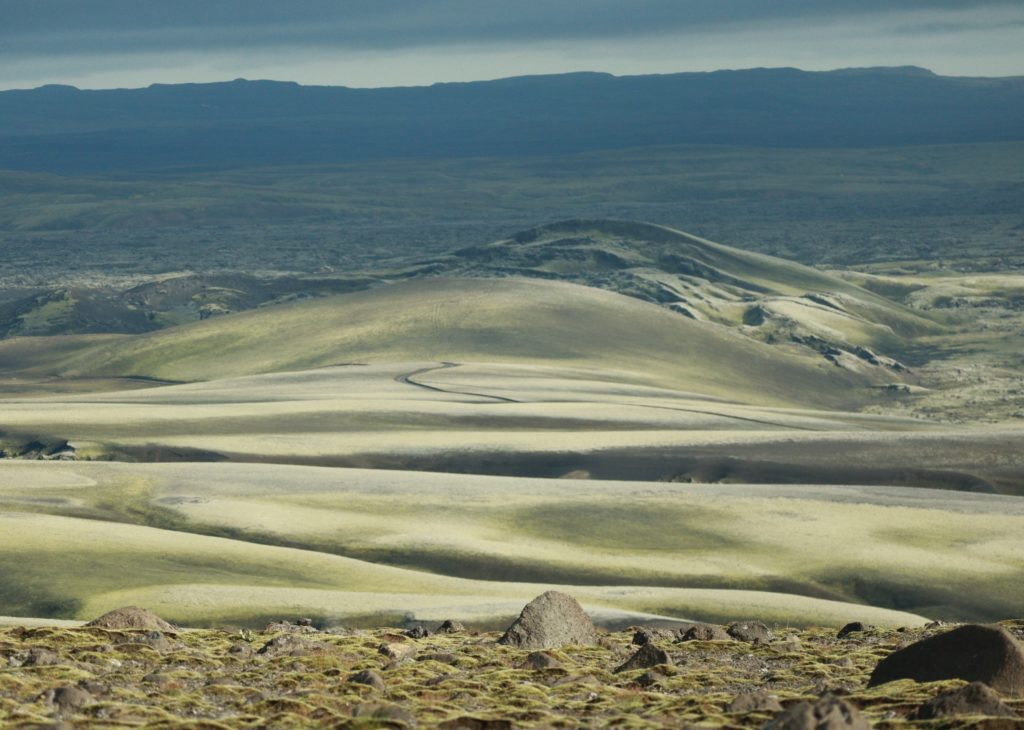 Craters from the 1783 eruption in the distance

Finally, we arrive at the Blágil campsite, after making some fun descents and crossing more rivers. We camp there and Benedict appears with 4 very cold beers! We chat with him, and he clarifies all the doubts we have about the area. 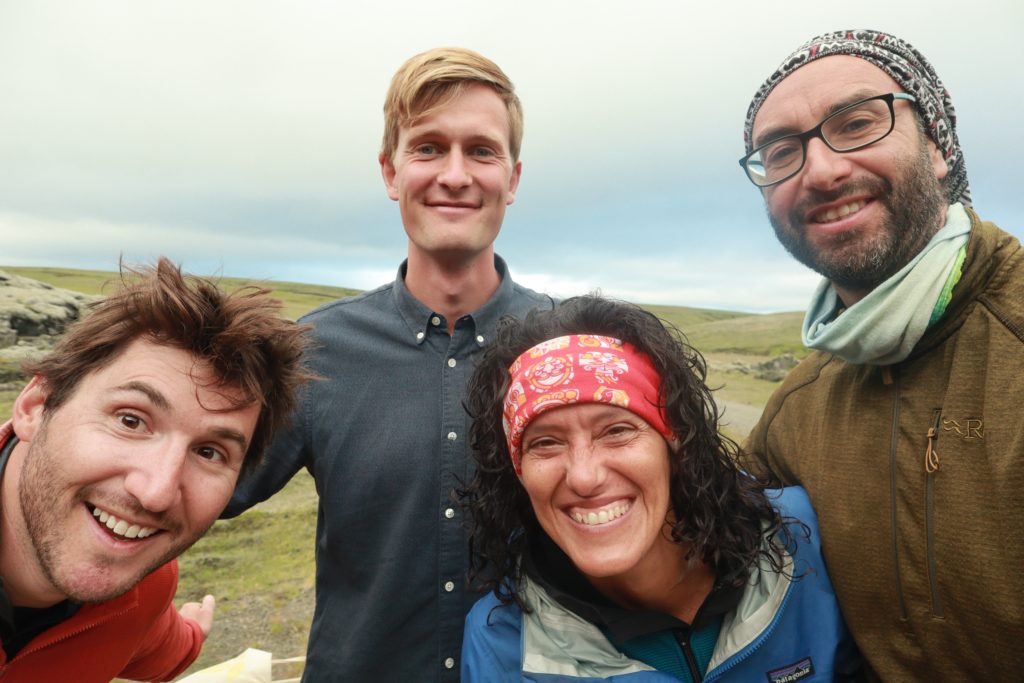 This last day is a bit of a formality to undo the outward journey by closing the circular route! We circulate at a good pace and happy with the adventure, visiting this area by bike has been a good idea. 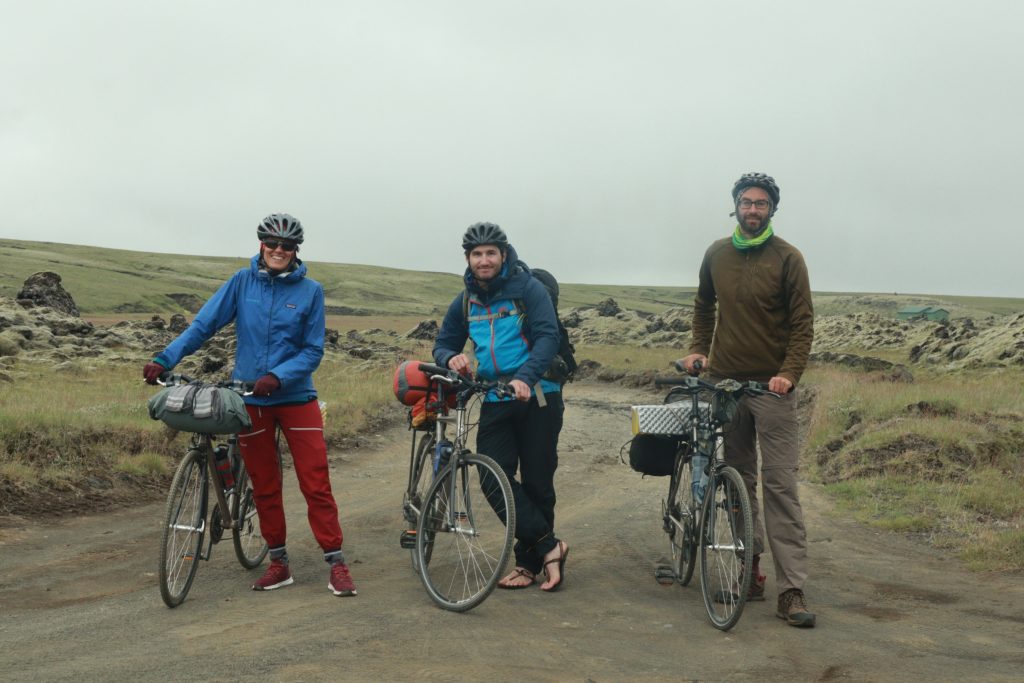 Once in the van we reach the “ring road” (road that circles Iceland), we cross the lava flow that came down from the Laki fissures and buried more than 20 farms. For more than half an hour we drive through impressive pillows of lava covered with dense mosses that have prevented the growth of other plants for 240 years. 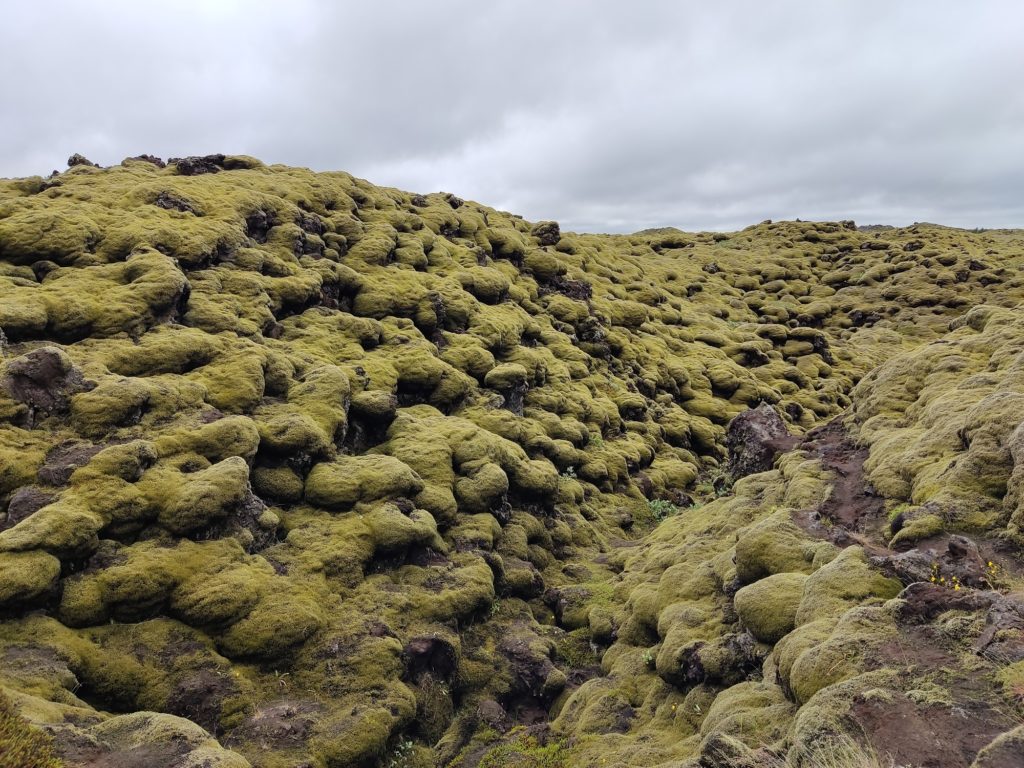 It is one of the magical things about Iceland, being able to see the dynamism of nature and its strength, and the smallness of human life.