From Ushuaia to Punta Arenas: Straight Borders and the Adventures of Magellan 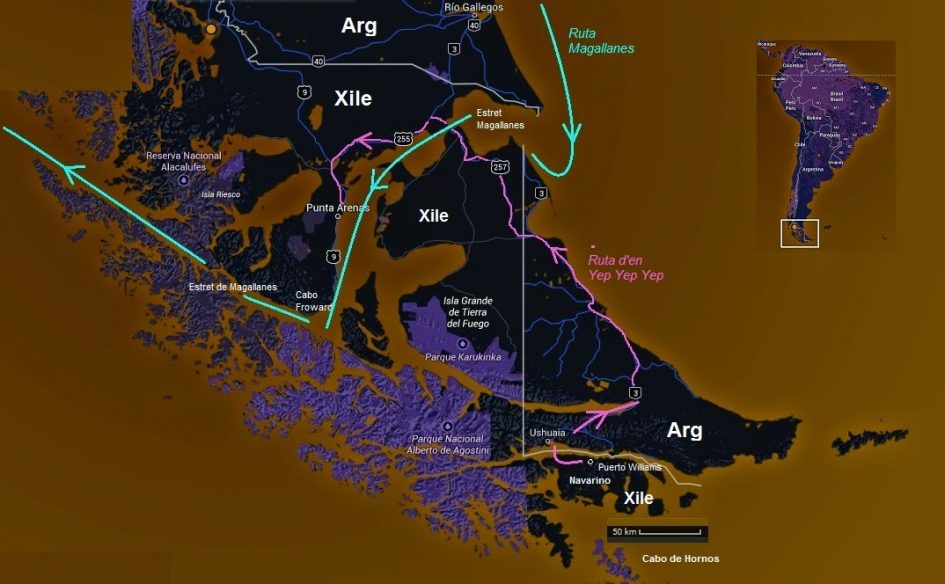 Ushuaia is a city on the north side of the Beagle Channel. This is where all the cruises that go to or from Antarctica stop, the motorcyclists and cyclists who have made the whole route from the north of Argentina, skiers in winter and us, of course.
It was created in 1873 as an isolated prison and a place for missionaries to evangelize the Yagan, natives of the area, and it was transformed into what it is now, or they want it to be: the city “at the end of the world.”
The city is quite commercial, but you can do some beautiful hikes without much effort. We did 3 day hikes: the walk to Lake Esmeralda, the 5-hour ascent (round trip) to the Guanaco hill in the Tierra del Fuego National Park, and the hike to the Martial Glacier. 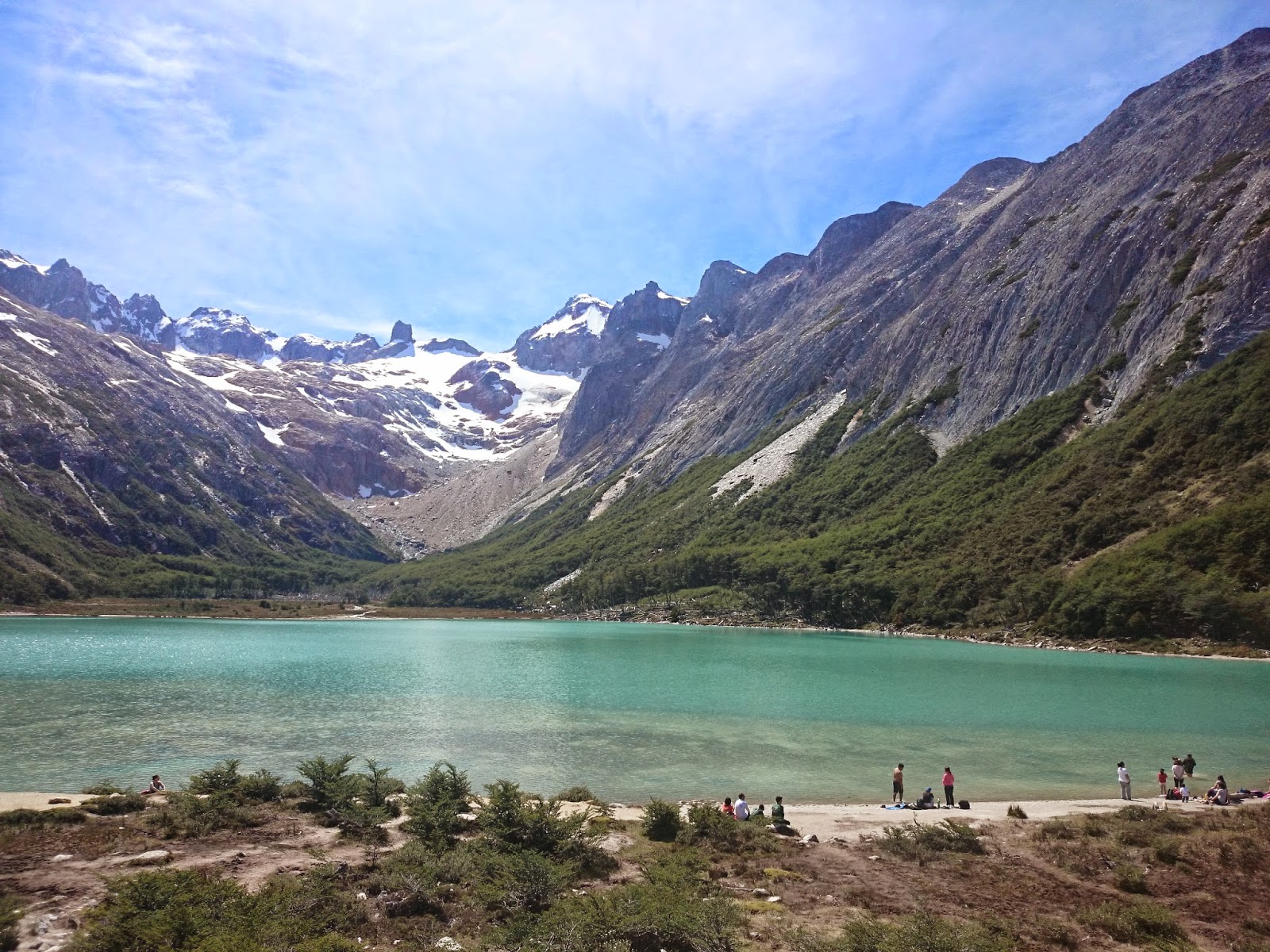 Crossing borders between Argentina and Chile

Once I can find a free seat on a bus to Punta Arenas (in January and February it is necessary to buy tickets a few days before), I start a 12-hour trip to return to Chile. We leave the mountains and the beech forests, and we go towards the dry part of Tierra del Fuego, a steppe with cows and natural gas wells, it looks like the far west!

After 4 hours we reached the border of Paso San Sebastián: we have a 45-minute queue in Argentina and a 45-minute queue in Chile. Also in the Chilean border, they check your luggage to make sure you are not carrying fruit, vegetables or nuts, to protect Chile from agricultural diseases.

The straight borders of present-day Patagonia

The issue of the borders between these countries is somewhat bizarre. Once the Spanish lost these territories, the “Viceroyalty of the Río de la Plata” became Argentina and the “Captaincy General of Chile” became Chile.

But Patagonia was considered “Terra Incognita” and it was a race to acquire the territory: the Chileans founded Fuerte Bulnes in 1843 and Punta Arenas (1848) and by 1875 the Chileans wanted the division between the two countries to be the dividing line of waters (all territories with rivers to the Pacific would be Chilean), while the Argentines that the division was made by the highest peaks of the Andes and founded cities such as Ushuaia or Río Gallegos to define positions in the territory.

At the end of an international arbitration led by England and different treaties, borders were established in 1881. If you take a look at the map you will see that they are straight lines. Chile maintained access to the Atlantic to be able to make exchanges with Europe, and Argentina had better control of the pampas and the attacks of the Mapuches on their herds. In 1902, they finished outlining the borders, with the participation of the great adventurer and naturalist Perito Moreno.

After an agreement in 1984 where they finished adjusting the borders in the Beagle Channel, things are calm, although the borders are still unclear on some islands, in the “Patagonian Ice fields” and some parts of Antarctica. The fact that Chile helped England with the Falklands doesn’t help either.

In short, it has absurd consequences, like having to pay 125 dollars to go between two neighboring towns like Ushuaia (Argentina) and Puerto Williams (Chile), that are 50 km away, or that Chilean buses circulate through Argentina for 1000 km, but you cannot go down in any of the Argentine towns that it crosses. Or that the natural gas that Argentina produces in Tierra del Fuego is not distributed to Chile, for example to Navarino.

The Adventures (or Misadventures) of Magellan

Once in Chile we continue through a dry landscape and cross the Strait of Magellan on a barge, with fantastic colors, blue and yellow and “toninas“, black and white dolphins, swimming around.
The history of the Portuguese Magellan is quite thrilling. Working for the King of Castile, he left Seville with 5 ships in 1519 to explore a sea route linking the Atlantic and the Pacific. He contacted the Tehuelches, natives of the north of the strait, whom he baptized as Patagones, and hence Patagonia. 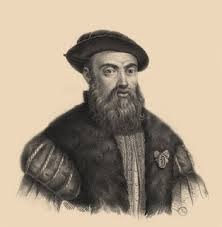 There are two theories: that it comes from Pata Gao (big feet in Portuguese) or that it comes from the name of a character in the Primaleón chivalric book called Patagón. He also baptized Tierra del Fuego after the bonfires of the Tehuelches that he saw on the coast.
You can imagine that the adventure had a bit of everything: no maps (no western people had ever sailed there), a shipwreck, rebellions by some captains who did not agree with Magellan plans and were executed, ships that went to explore some crossing route and at the end, they decided that Magellan was crazy and sailed back home…
At the end, he managed to reach the Pacific, although he died later in a fight with indigenous people in the Philippines. Magellan kept the name of the strait and Sebastián Elcano arrived in Castilla with 18 survivors and took the credit of being the first western sailor to go around the world.

Finally, we arrive in Punta Arenas, a nice little city, with tourists but also a lot of local movement, and some incredible sunsets with boats and the Strait of Magellan.
It is the perfect place to prepare for the next adventure: walk to Cape Froward, the southernmost point of the South American continent.
Greetings!