Adventure to Cape Froward and the Magellanic Penguins 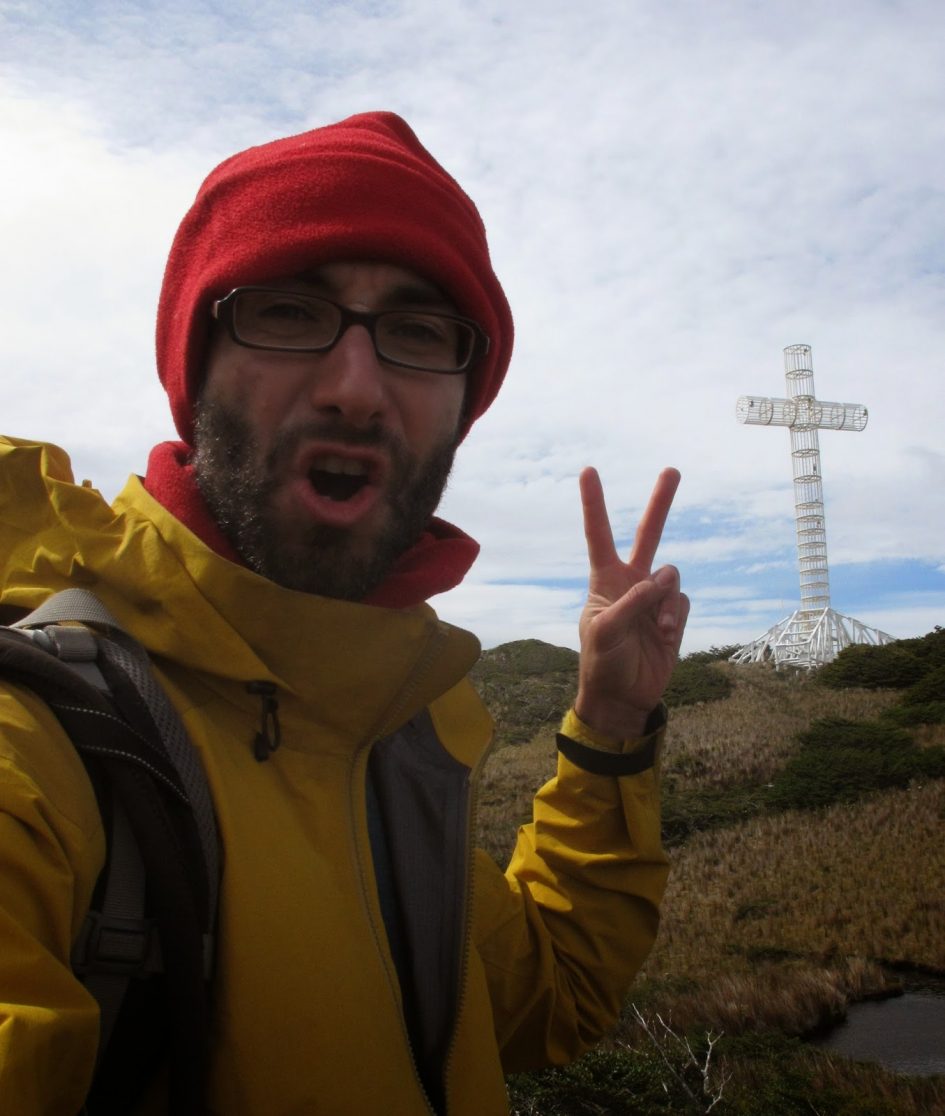 Once in Punta Arenas, I prepare myself for the next adventure: to reach Cape Froward, the southernmost point of the South American continent. Further south from there everything is islands!
I have been told that there is a path that runs along the coast of the Magellan strait, with marine animals such as seals or sea lions and that you have to cross 3 rivers at low tide. It is 40 km one way (80 km round trip) and it takes about 4-5 days, but I had to walk more because I missed the outward bus. 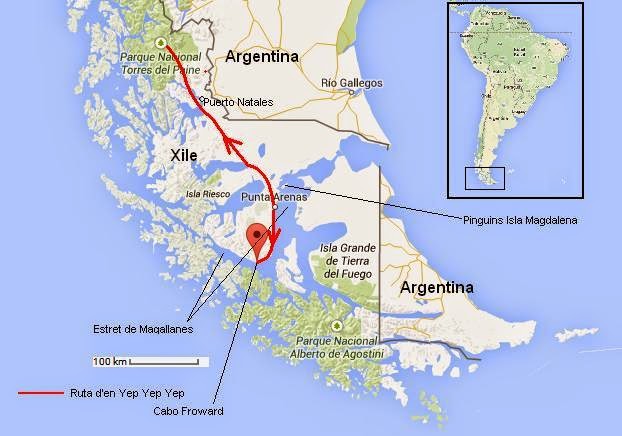 I go to the bus stop that goes to San Juan, 70 km to the south, which at the tourist office told me that it leaves at 9 o’clock, but it turns out that the bus passed at 7. The next one is at 6 o’clock in the afternoon. A woman named Ana who runs a souvenir stall tells me that this happens to many hikers. 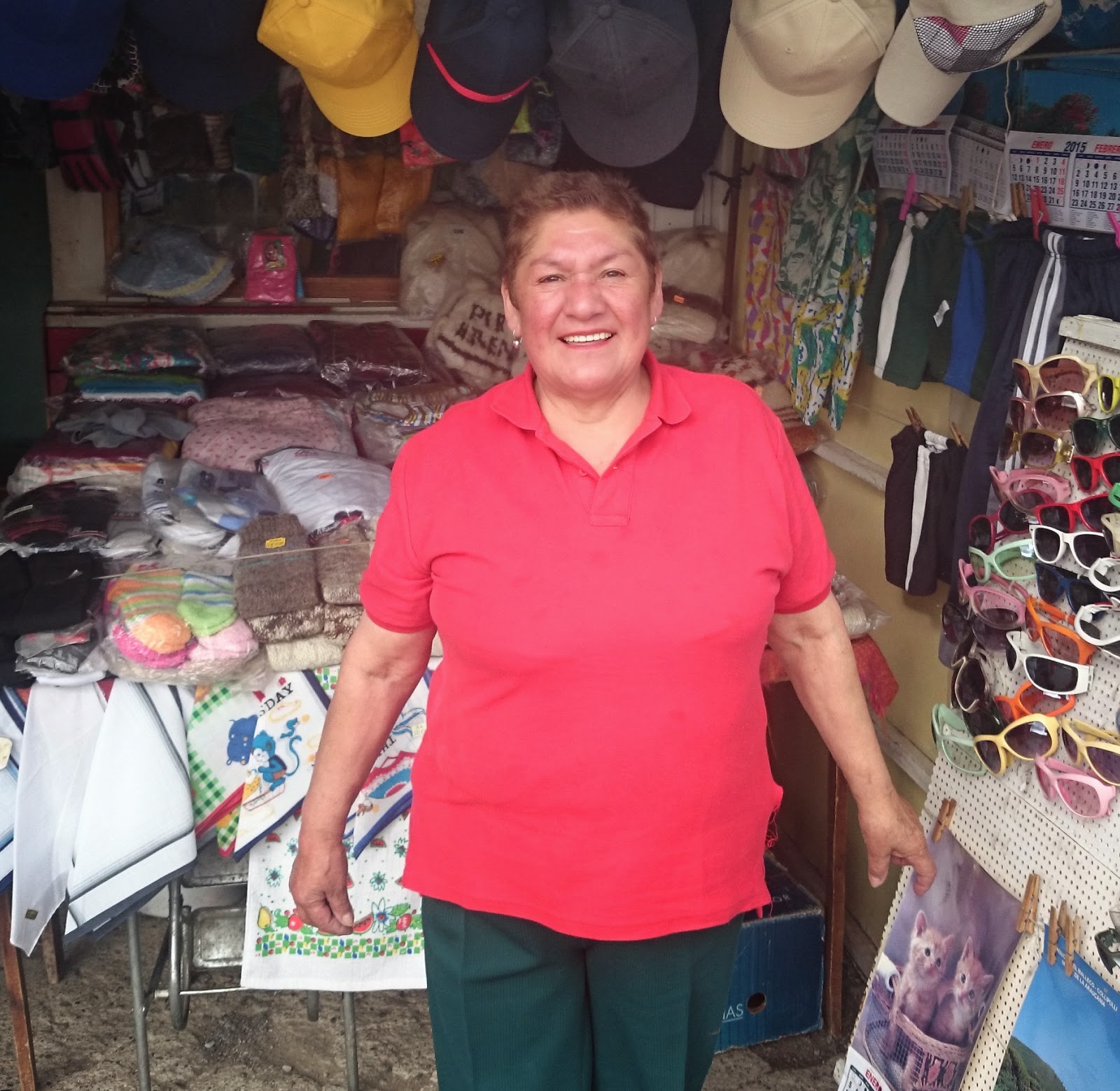 Ana and her stall

I manage to hitchhike and start walking! You can see a map of the route here: 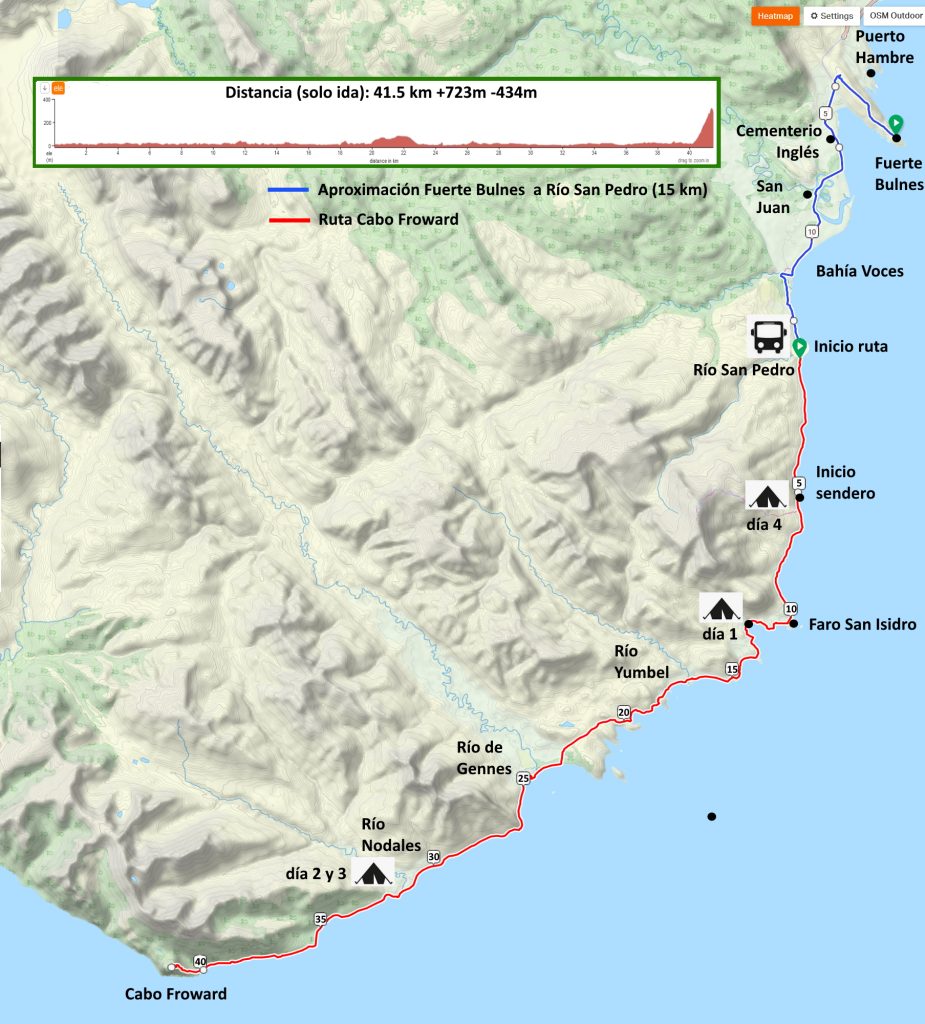 I walk an extra 15 km exploring things before starting the route. I pass through Puerto Hambre, a place where the Spanish tried to found a colony in 1584, and all but 1 died! It could be that it was due to have ingested contaminated shellfish since there is a red tide in this area.
Close by, in 1843, the Chileans founded Fuerte Bulnes to take positions in the strait, and after 3 years they decided to move north and found Punta Arenas, since the conditions in the Fuerte were too harsh. And just 1 km further on is the tomb of Stokes, the captain of the first voyage of the Beagle, who committed suicide in 1828 under the pressure of having the entire crew under his command.
I get away from this place with so much bad energy as fast as I can, I pass by the Bahia Voces, where Magellan heard voices of the local tribe, the Alacalufes or Kaweskar, who lived like the Yagans in canoes.
I arrive at the San Pedro River, where the route to Cape Froward begins, and later I arrive at the San Isidro Lighthouse. Here I talk to other hikers and I see that there are more people on the trail, which reassures me. I walk a little further and come to a bay that in 1906 was a whaling station. Here I camp, tired after a long day. 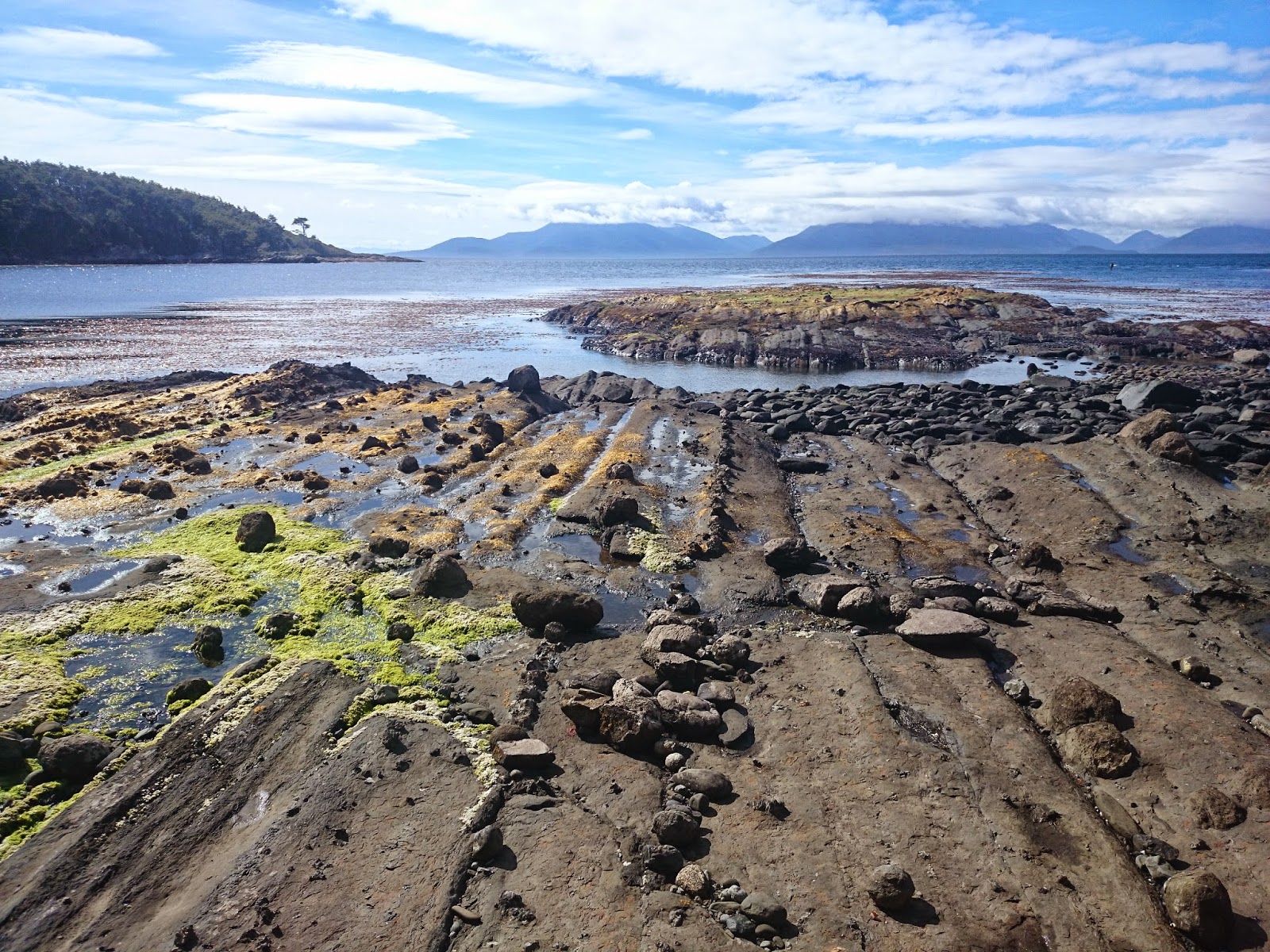 The beauty of the Magellanic landscape

Important note: to cross the rivers it is important to calculate when it is low tide and start crossing the first river a couple of hours before low tide. Enter here to see the low tide in Punta Arenas and add 30 minutes.

Today is a key day! I want to cross the 3 rivers in one day, let’s see if it is possible. There is a spectacular sunrise and breakfast watching as the “toninas”, some black and white dolphins, eat in the bay.

I cross the last river, the Nodales, just in time, as the water is almost to my groin! A couple of Germans show me from the other shore the most suitable place to pass. I camp by the river and contemplate the landscape. There are clouds and a ray of sunlight illuminates a distant mountain that I had not seen, like those museum models that turn on a light bulb when you press a button. Beautiful! The mission of the day is accomplished. 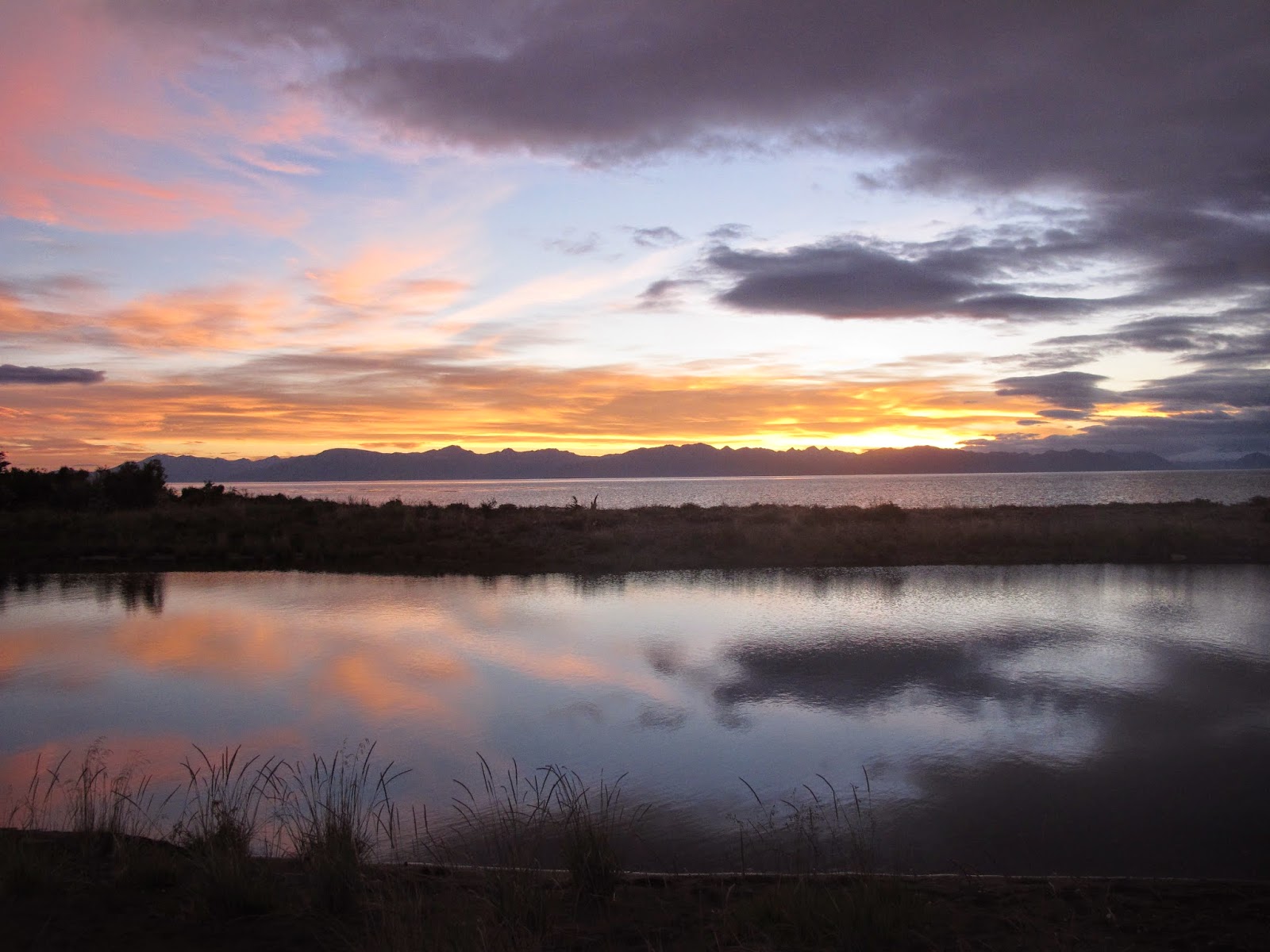 Today’s the big day! Light, since I leave the tent behind, I head towards Cape Froward 5 hours before low tide to go while the tide is going out and return when the tide is rising since the trail goes along to the coast.

Halfway through I see the mummy and I record a video where you can get an idea of ​​this walk:

And after two more hours I reach the objective: a large cross called “Cruz de los Mares” marks the place, and it is empty to allow the strong wind to pass through it. The views are spectacular, it was worth it!

There is a plaque where it says that Pope John Paul II was there in 1981, I wonder if on foot or by helicopter! Anyway … Once I have verified that there is no Wi-Fi here, I return to my tent with views of the Strait of Magellan, 4 hours northeast. 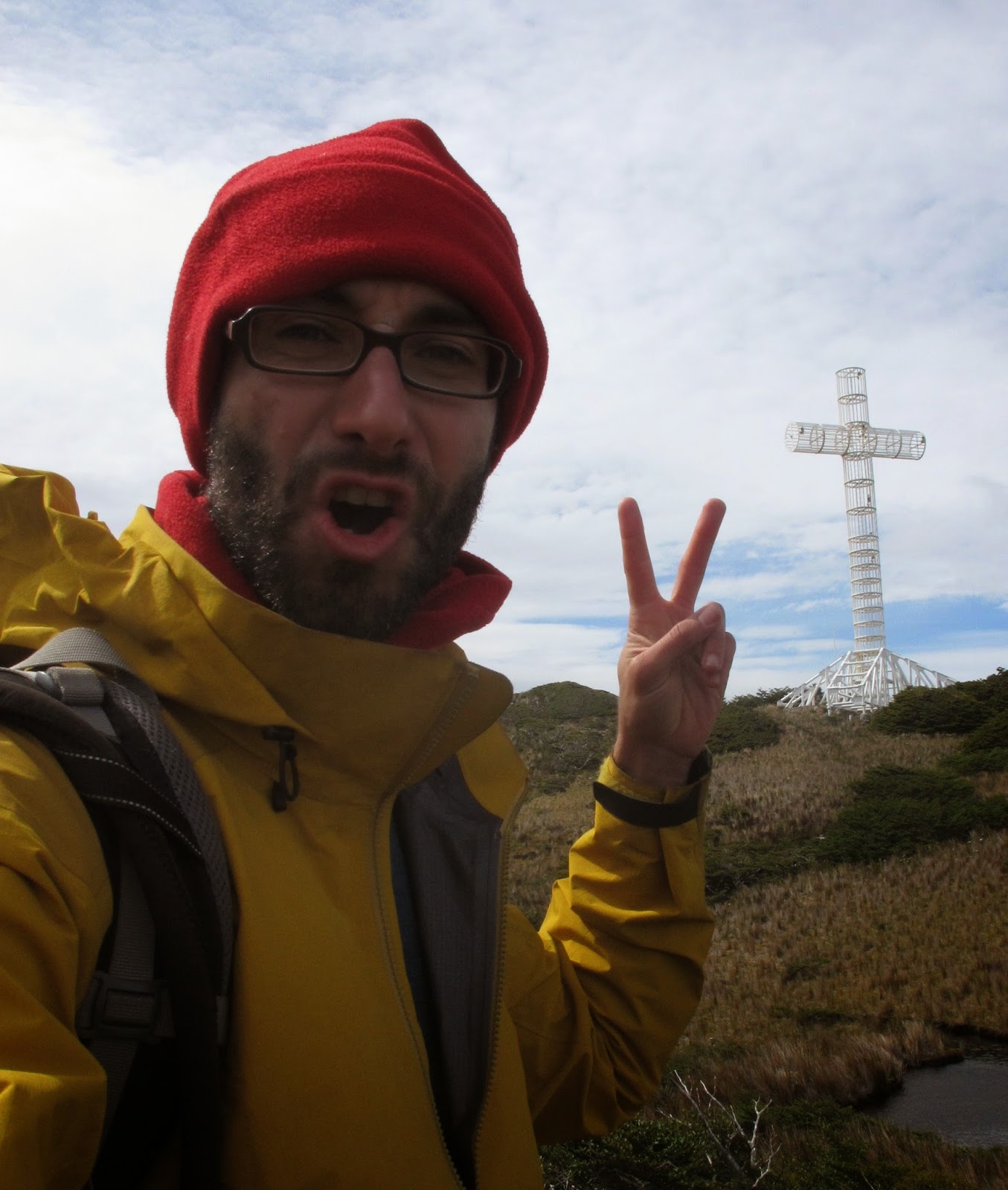 Now it only remains to return. I already know that I can cross the 3 rivers in one day, so I decide to walk close to San Juan, to catch the bus early the next day. 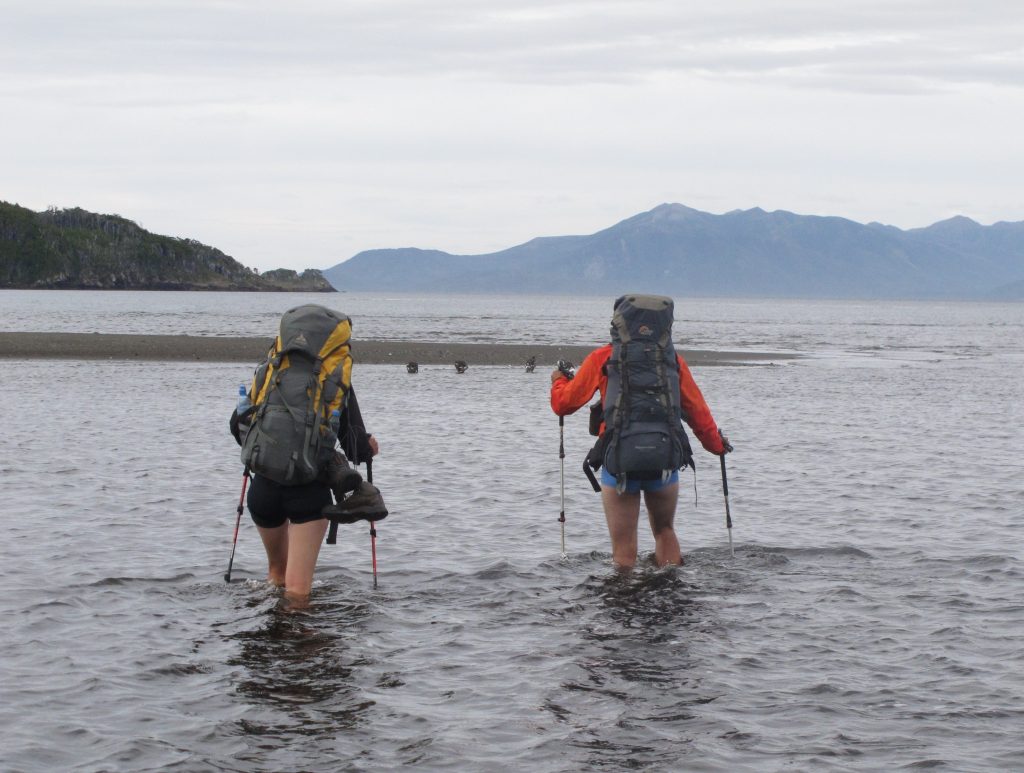 German couple crossing a river on the Cape Froward route

Other walkers have seen whales, too bad I haven’t. Neither seals! You have to walk looking at the ground, with so many algae and pebbles. But I have seen quite a few animals:

I camp together with the German couple who in the last few days have been checking that I was well and with two brothers, also German, whose food was stolen by the fox, and they have had to return. In short, a good adventure! 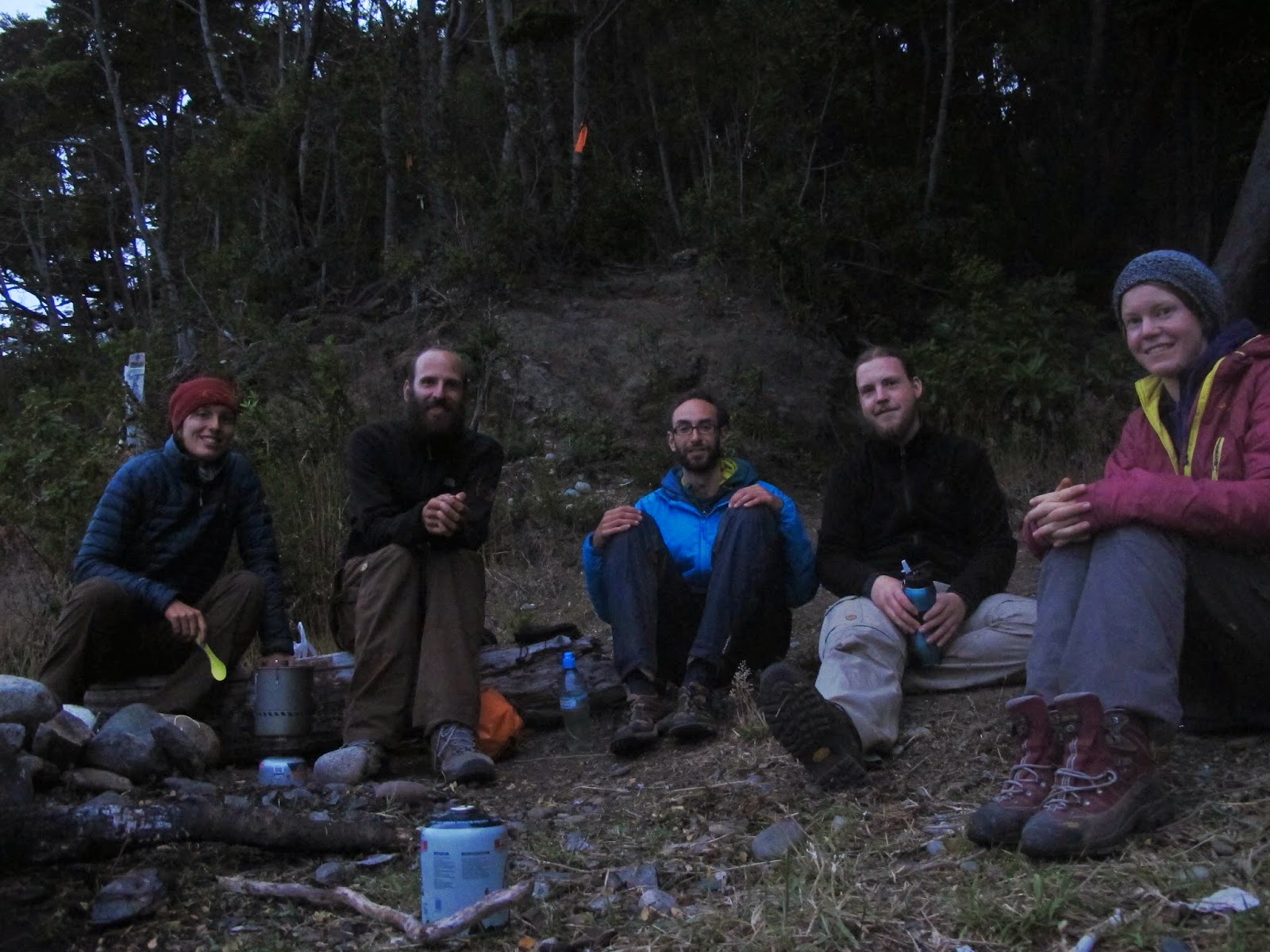 Once back in Punta Arenas I don’t feel like seeing the backpack for at least a few days. I recover and buy a tour to see the Magellanic penguins on Magdalena Island. They are sub-Antarctic, since from March to August they go to Brazil. There is a lot! 70,000 couples!

And here is a video of the penguins in action:

Once I have recovered I prepare to go to Torres del Paine, a place that everyone tells me that I have to visit even if it is full of people.