After 4 hours by boat from Padangbai, Bali, I arrived in Mataram, the capital of Lombok. Here I pretend to climb Rinjani, a volcano of 3721 meters, and explore by scooter beaches and villages.

One immediately realizes several differences with Bali. First, here are Muslims and everywhere there are women with “jilbab” and men with white hat, if they have not gone to Mecca, and black, if they have.

Second, at the beginning they are not as friendly and I did not receive an unconditional smile like in Bali. And even more: hardly anyone speaks English, so I had to learn a few words of “Bahasa Indonesia” to understand them! It is quite easy, since they have easy conjugations, neither male nor female. It’s like speaking Indian: “Saya Berbicara Bahasa Indonesia” (Me speak Indonesian).

In the morning, at 6, I find Ari, the owner of the hostel, ready to accompany me to immigration to extend my visa from one month to two months. And as he wants to sell me the tour to climb Gunung Rinjani, the highest mountain of Lombok with 3721 meters, he appears dressed with a Barça shirt! 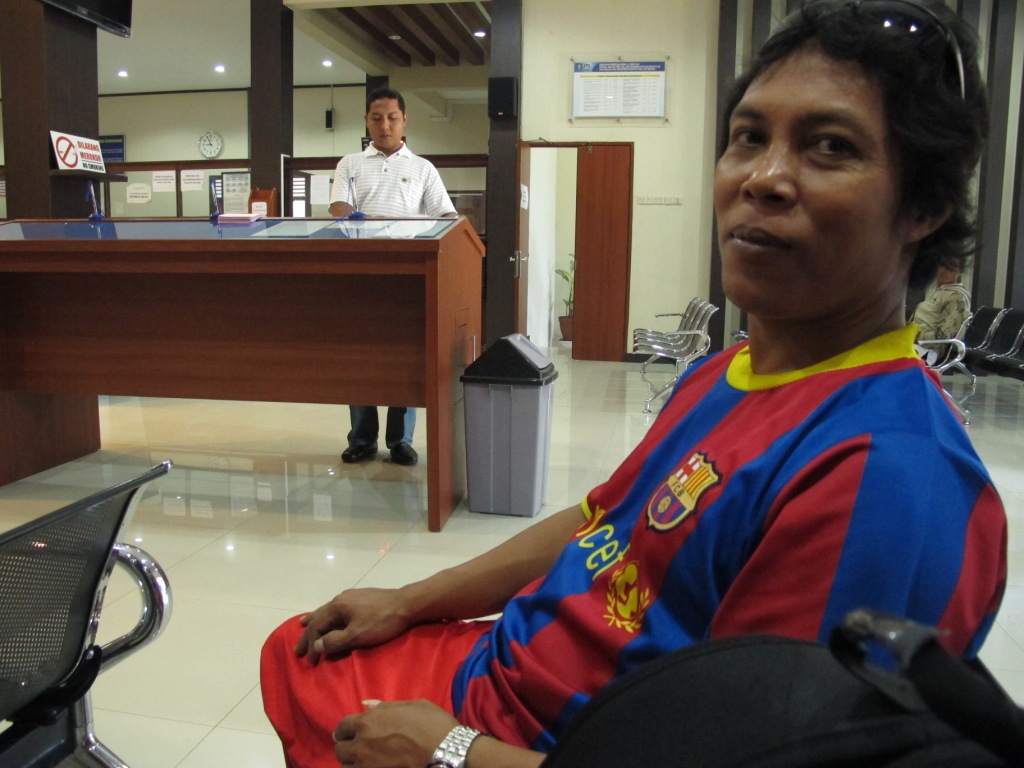 Ari, ready to sell me a tour

He tells me that the office opens at 9, but I do not trust him since he processes the visa for 500,000 rupee, when you can do it for 250,000, and I think he wants me to arrive late! We arrived at immigration at 7 and we found all the workers doing aerobics and sweating, under the direction of a courageous leader. And when we went back an hour later, they were still doing gymnastics and then they started to do relaxation exercises.

Finally I bought Ari´s tour to Rinjani and it was like a joke: an English, a French, a German, a Dutch, an American and a Catalan going to climb a mountain of 3721 meters for 3 days! Nobody explains what to bring, there are no camping pegs (sticks are used to plant the tents), smiling porters loaded with tents and sleeping bags walking in flip flops and smoking, and when we asked the guide what type of vegetation there was he answered: “Trees”! The route is quite simple but it seems that you have to do it with a guide.

On day 1 we started in Senaru, we crossed a forest and followed the same path up all the time to camp on the edge of the Rinjani crater. From here there were magnificent views of the summit and a mini crater, Gunung Barujani (2300 m), steaming alongside Lake Segara Anak. We slept at about 2400 meters. 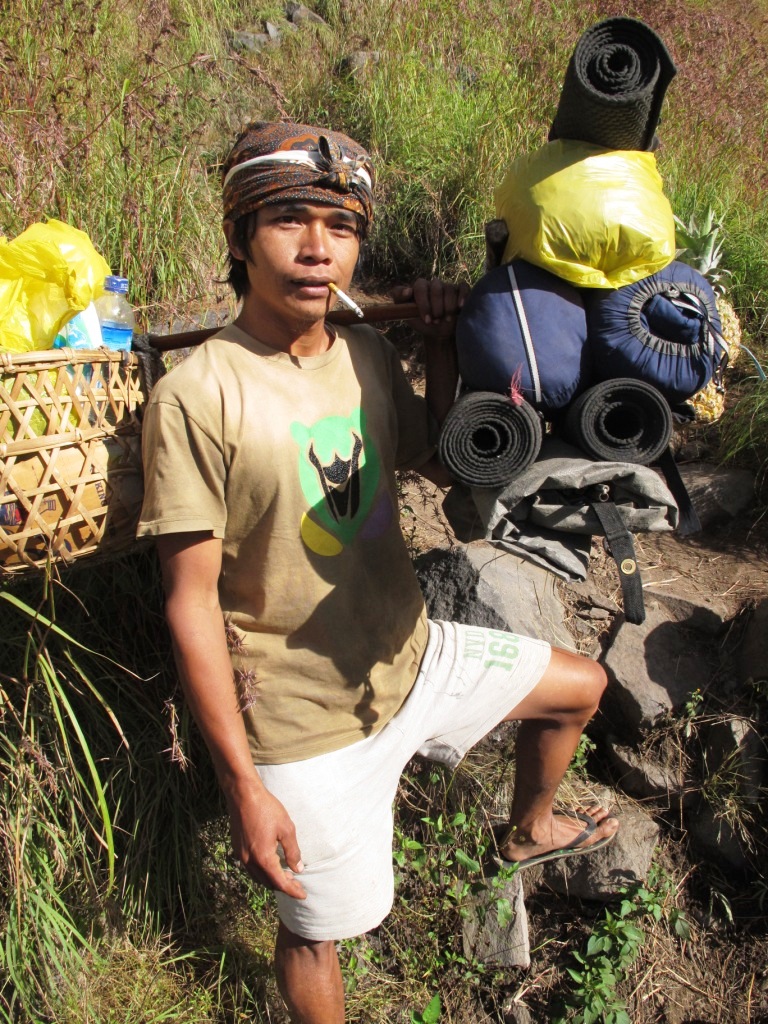 Martut in flip-flops and always smiling! On day 2 we climbed a bit more and we went down to the Lake Segara Anak (2000 m), where locals were fishing “silapat” and soaking in the hot springs next to a mini cone emerged from the eruption of 2004. After lunch, we continued climbing to sleep at 2700 meters, with a spectacular sunset with clouds hanging from the crater. A fisherman shows proudly a “Silapat” On day 3 day we got up at 2.30 am and climbed the ridge under the moonlight to reach the top at 6 am and see the sunrise, with the shadow of the Rinjani against a cloud, the lake 1500 meters below and the moon in the sky, incredible! In the background we could see the peak of Agung, in Bali! We then wnt down to Sembalun to finish the hike and return to Mataram.

Touring around the island on motorcycle

Back in Mataram, I decided to rent a scooter and make a 5-day route in the island, which is quite small. I began in Tete Batu, a village in the midst of rice fields on the south side of Rinjani. As in Bali, people are not in a hurry, and despite the linguistic barrier, they have all the time to communicate with you. 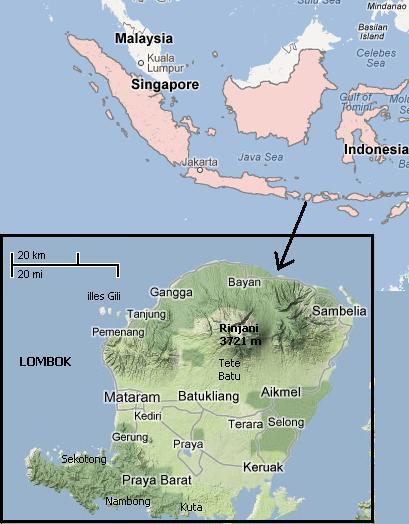 I met Kamarudin, who is building a house with the help of his brother, Hambali, who speaks English because he lived in Canada, and a cousin. His wife makes bricks with sand and cement and let them dry. In general, the women and girls answered no when I asked them if I could take a picture of them, it´s a pity!

They invited me to drink “Kopi Kedle” or soy coffee, to smoke a local tobacco cigarette (here all the men smoke) and eat corn and we spent two hours chatting. They told me that 90% of people here are Sasak, and they combine Islamism with animism. We also talked about how different western life is from their style of life. 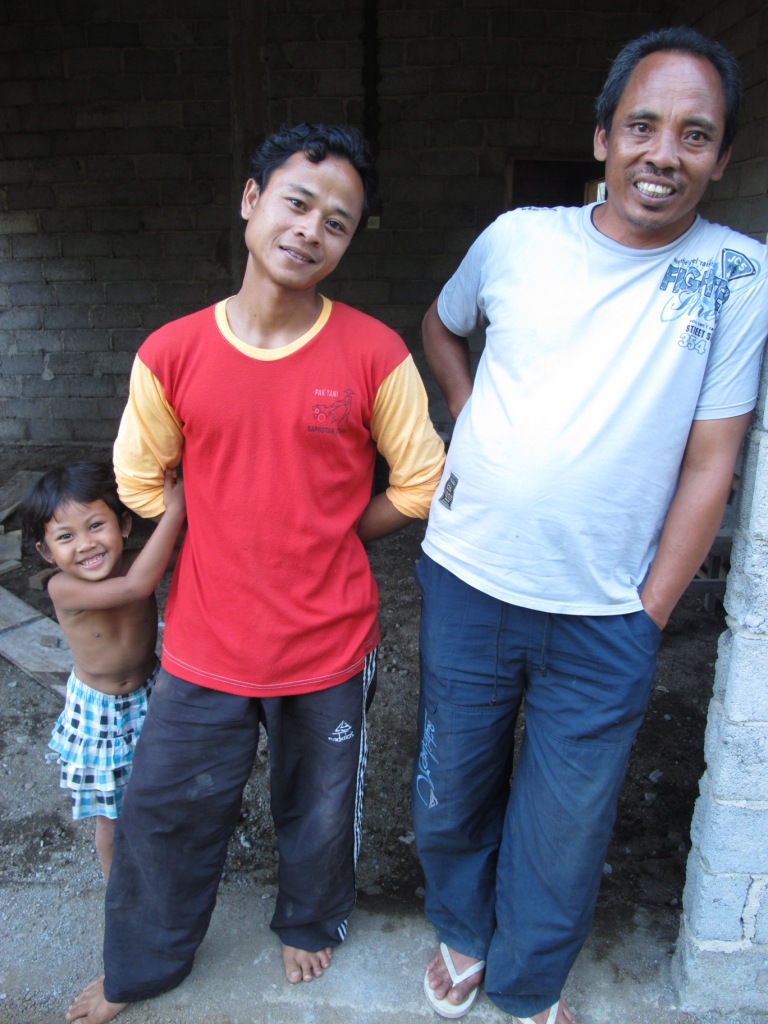 Kamarudin and his family

Chris, from the hostel, explained me more: “They speak Sasak and can have up to 4 women. To get married you also get to “steal” the girl you like one evening, and wait for the authorities to come the next day to arrange a wedding. Like in other places where they practice Islamism, to divorce man simply say “I want to separate from you” 3 times. The woman can also divorce, but must go to the authorities.

Once divorced, the man can not marry again until the woman marries. Sometimes the process can be a bit slow, and it is possible to pay someone to arrange a wedding express with your ex-wife, so it´s the other man deal waiting until the woman finds a definitive husband! The relationships here are very different; from outside it seems that women are more servants than companions.

In Lombok having an alarm or not is not that important: every day at 5 in the morning they start reciting the Koran very animatedly from the mosques. Even in a small village like Tetebatu, the mixed sounds from 4 or 5 mosques sounds quite phantasmagorical!

I spent next day going to a waterfall called Air Kujut that locals say that has the property to make your hair grow! There are also a few shy spider monkeys, quite large and with a head that reminds me of  “Darth Vader” from Star Wars.

I continued the route to the east, with a strong Muslim ambiance crossing a village where everybody was helping to build the mosque and villages like Masgabik, with motorcycles everywhere and carts pulled by horses. I arrived at Kuta on a road that would need a trial bike instead of a scooter and it is full of almost empty bars with Bob Marley’s music at high volume. 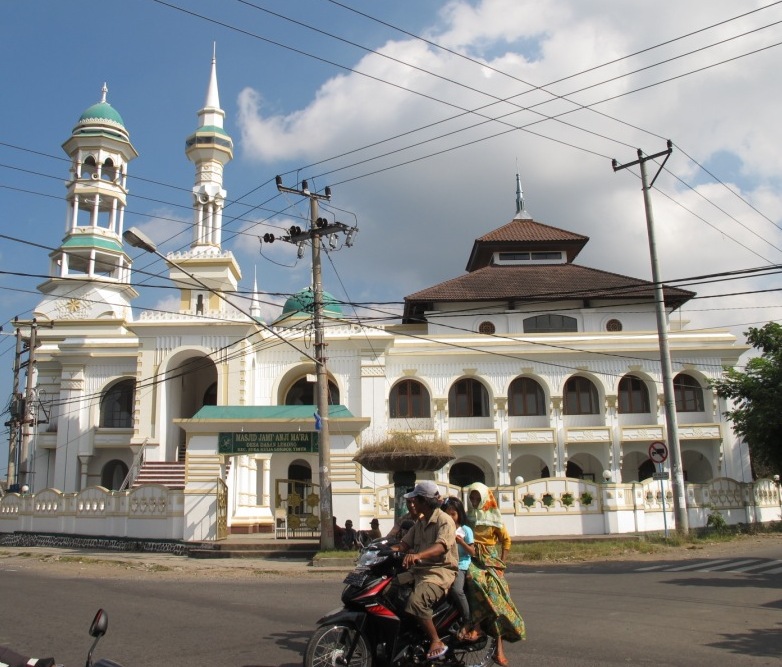 The next day I followed the south coast of Lombok, on a road in poor conditions to see beautiful beaches where you can swim and after enjoy a coconut on an almost empty beach! As everywhere, it is easy to talk to the locals. Tati, from Mataram, started talking to me quickly in Indonesian and I had to use “Saya Tidak mengerti” (I do not understand) but in the end we established an interesting communication! People call you “Halo Mister” when they see you crossing their villages. 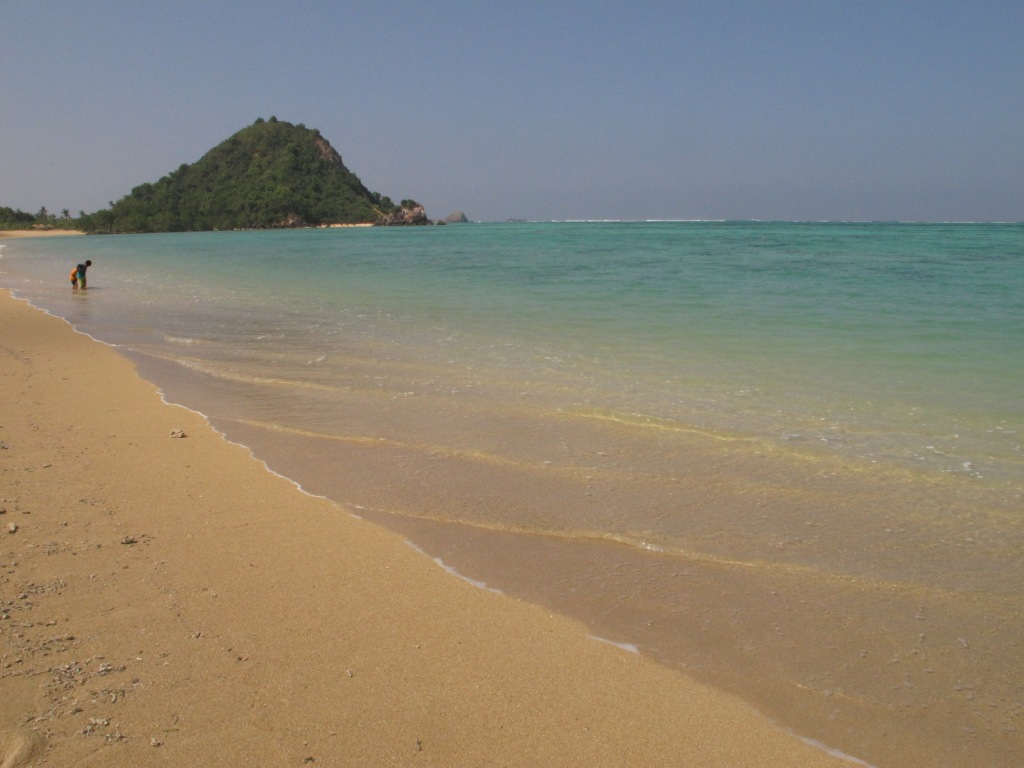 At night, I found a family that welcomed me in a small village called “Nambong”. Dika, who speaks a little English, is a bit of a liar, but a good guy! He first tells me that he has no wife and that the girl who is in the room is her sister, and then turns out she is his wife and also has a daughter!

I got octopus, fried little fish, rice and a sort of beans for dinner and he told me to eat as much as I wanted, because they had many more fish and octopus inside. Only he and I were eating, and luckily I did not eat that much, as the leftovers were eaten by his wife, his mother, his sister, his daughter and a man named Elamón.

No more octopus or fish appeared anymore. His daughter watched Tom & Jerry in Arabic (which nobody there understands) in the screen of his father’s cell phone, until the battery ended. 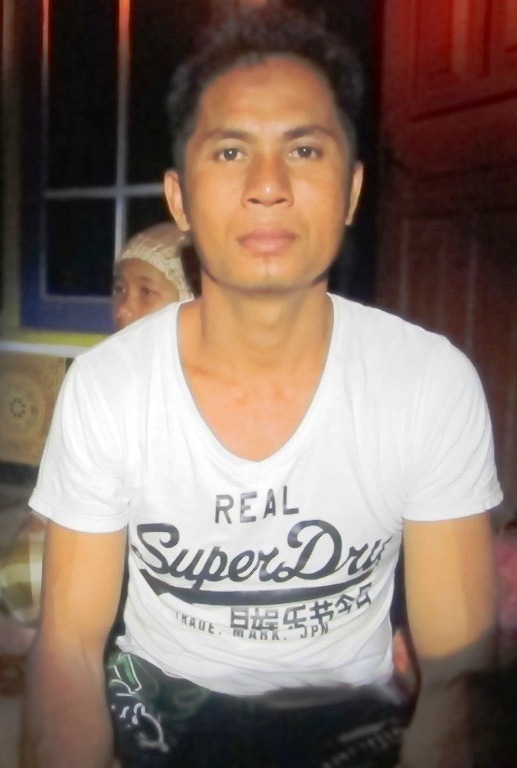 This family had no light or toilet (to go to the bathroom I had to take the bike and leave the village). They have 4 cows that they have bought for 2 million each ($200) and they sell for $600 for the Ramadan. In this area, some families have bought a kind of cylinders to process the soil and obtain gold, and also cultivate sea algae to sell in Jakarta, Java. Despite everything, they were so generous as to give me their room for one night.

Next day I continued going south crossing a market in Sepi and visiting the Sekotong area, with white sand beaches and waters of different shades of blue and I went back to Mataram. I doubted whether going to Flores, an island with mountains east of Lombok or to go to Sumatra. Because in 2 days school holidays began, the prices of tickets to return from Flores were very expensive and I decided to follow the initial plan and fly from Bali to Sumatra, way cheaper.

A Balinese family welcomes me

At the hostel I met a Balinese family with 3 children. I asked them if they could take me to the ferry to cross to Bali, and not only the brought me to the ferry but they paid it, fed me,  and invited me to sleep at their place and helped me to purchase the plane ticket, which can only be purchased with a Indonesian credit card!
Yoman and Gayaetri feed primarily on fruit and do not eat meat, as they tell me that 60% of global CO₂ in the atmosphere is caused by livestock activity. They had t-shirts that said “Go Green, Go Veg and Save the Planet”. Yoman and Gayaetri, the best hosts!

I said goodbye to them eating Klak-klak for breakfast, a sweet green candy based on rice flour and coconut and I went to the airport, glad to have met them, with a cone of rice, sambal and tofu that they gave me to eat along the way.

What more can you ask for?