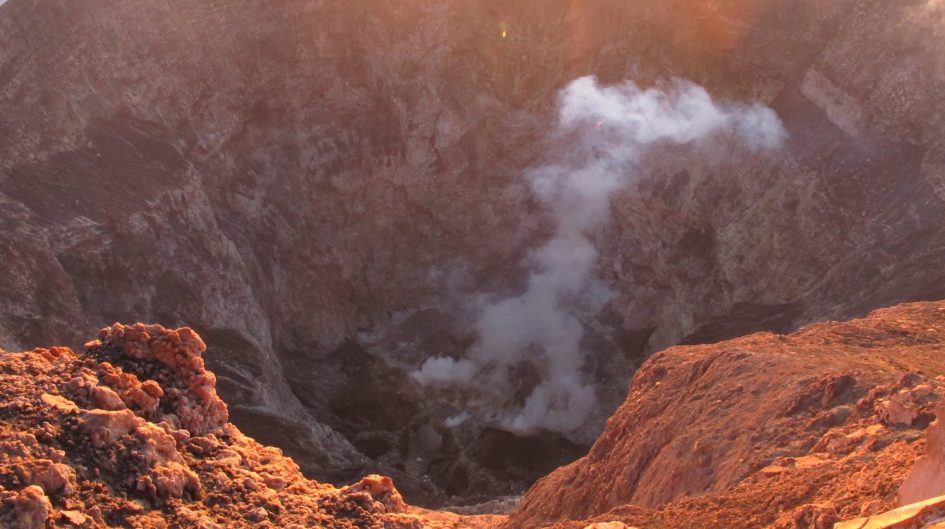 From Bali I get to the warm Jakarta, where I have a 6 hour transfer before flying to Padang. I change terminal and I feel as weird as an alien: I am the only “bulé” (foreigner) in the whole terminal, amid people who do not speak a word of English and surrounded by women with jilbab and men smoking all the time! Once in Padang there are no tourists anywhere, I love it!

I stroll around the city to find a giant market where they sell everything: fish, utensils, vegetables, clothes… There are opelets (mini buses) tuned and with techno music at high volume going up and down, and 13 year old girls with Jilbab celebrating the last class of the year eating at KFC, not so different from when we were going to celebrate the end of the academic year at the local sandwich bar. 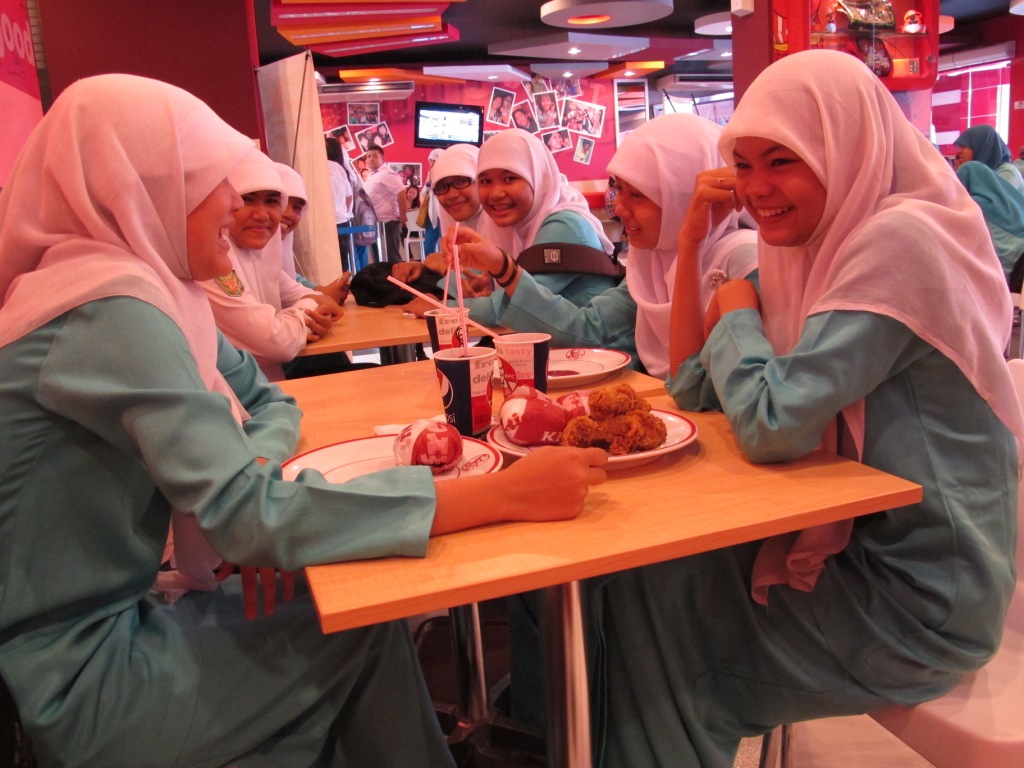 Girls in Padang celebrating the end of the school year

I enter a shop to buy pens and I meet Rina, a woman who speaks fluent English with an American accent. She immediately invites me to her village next to Sawahlunto, a 3 hour drive, to spend few days and visit the school where she works as an English teacher. Why not, I wonder… And a couple of hours later I am in the car with her husband Poni, her mother (Ibu), her sister and one of her daughters.

After a stop at the mosque for the evening prayer, we continue the journey along a road full of bumps and trucks that let go black and stinky smoke, and I am very happy when we arrive at her village, Talawi! 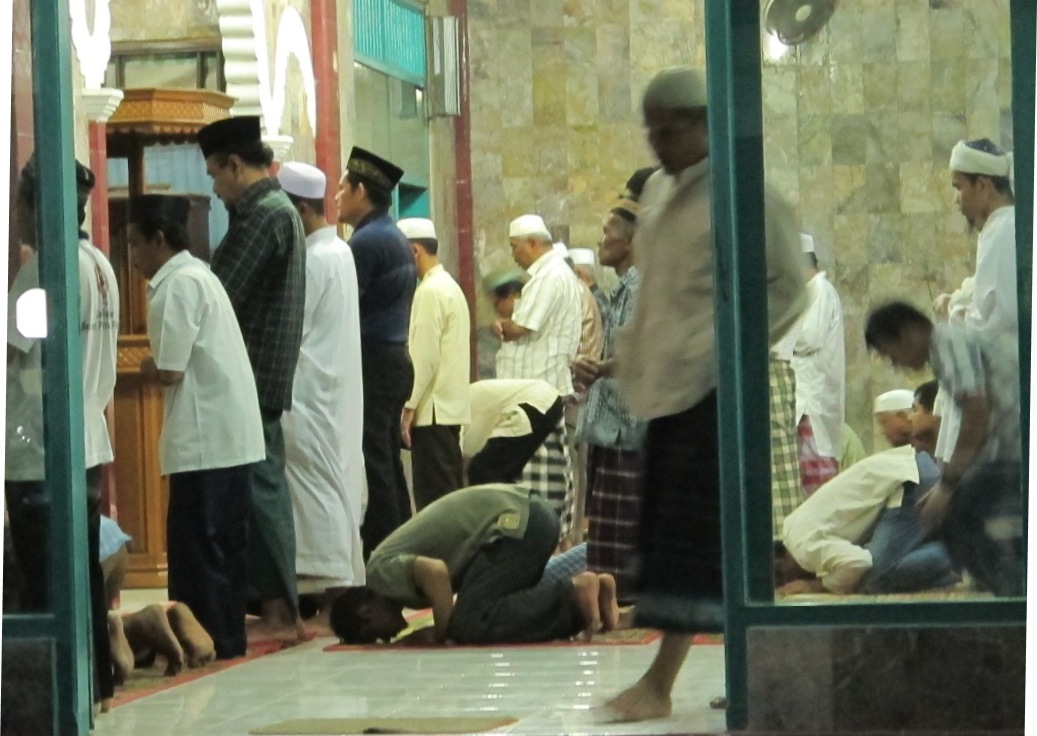 Men praying at the mosque, Sumatra

The next day is very intense: I go with her to the school, where they have the last exam of the year. I receive an avalanche of the usual questions in Indonesian: Where am I from, if I am married, if I have children, how old am I… They are amazed when you’re more than 25 years old and don’t have a family!
I enter a class and they ask me to explain “Matador” (that´s how they call Fernando Torres from the Spanish soccer team) and I find myself in the middle of a class explaining what a Matador and a bullfight are and that this is not typical in the place where I live.

I spend 3 days in the village, chatting with Rina, which is the only one who speaks English, about very interesting things. She tells me that she had a Canadian boyfriend and could not marry him because her mother did not approve the wedding and that in Indonesia two people from a different religion cannot marry.

She also tells me that her husband is strongly Muslim and that one day he came home with the proposal to marry another woman, and she told him to go ahead, but that before, he would have to divorce her! With the help of the parents-in-law, he changed his idea, and now he is enshrined to go to Afghanistan to fight against the Americans.

They are part of the Minangkabau culture from the west of Sumatra. It is a matriarchal culture, where women possess the land and control the economy of the family. Jar, Rina´s mother, has a small loan business for the people of the village and Rina is a business woman with lots of plans for the future. She even adds the children of her school to Facebook in order to promote the items that sells in her stationery!
The Minangkabau houses have horn-shaped roof in reference to the water buffalo. In the west of Sumatra people eat Padang style: when you enter a bar they put all the dishes in front of you, you get what you fancy and at the end you pay for what you’ve eaten! 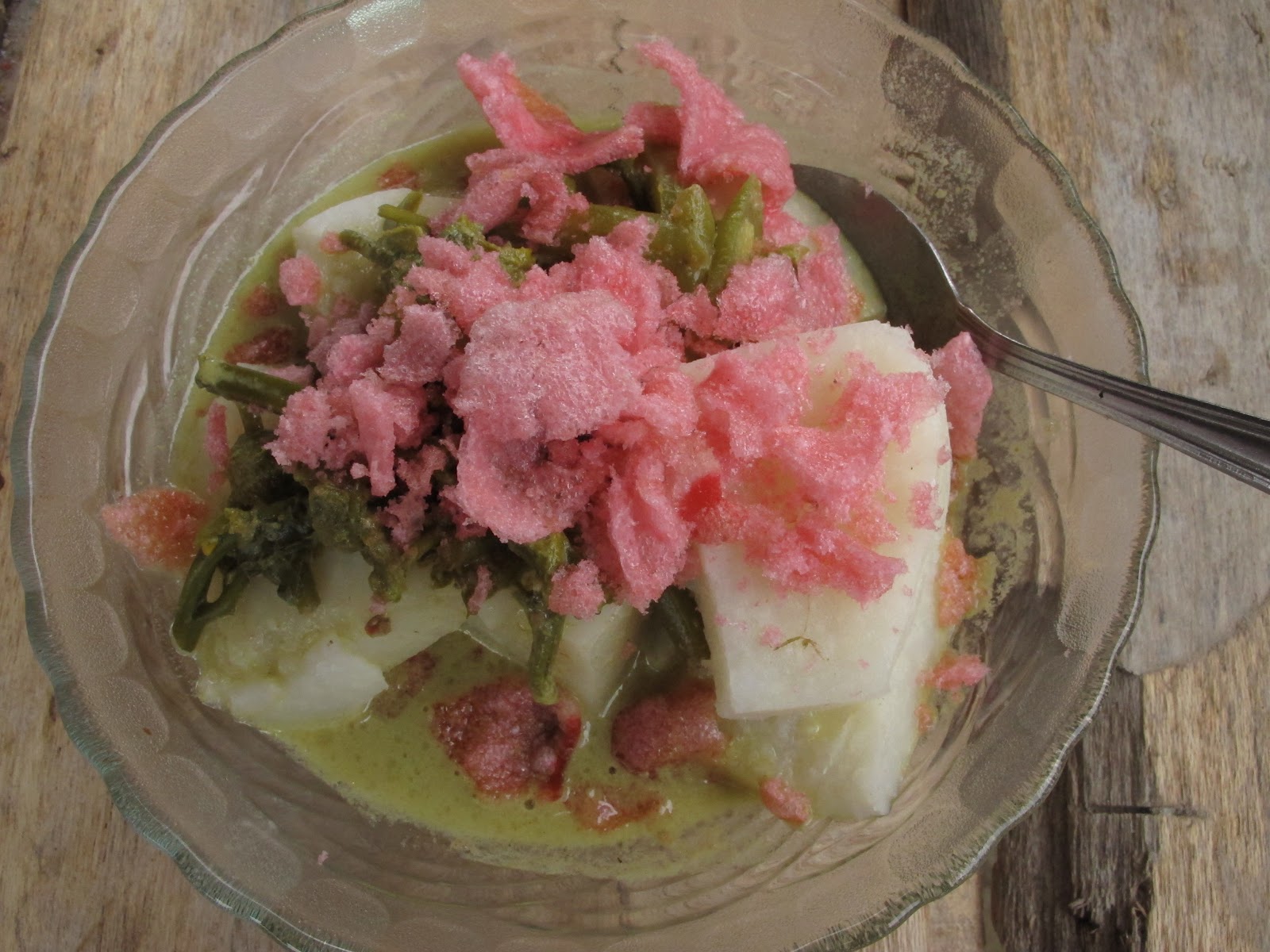 On Sunday we go for a walk and she invites me to “Lontong” for breakfast, a compact rice with curry and some pink chips. There are motorbikes and cars everywhere with men who have dogs and Rina tells me that many men go out to hunt wild boar, and if they catch them, they are taken in the middle of a football field where they release the dogs and they bet to see which dog will kill and devour the pig faster.

She does not like this activity at all, because of the cruelty involved, and her husband less, because the dog is impure according to the Muslims and after touching one you have to wash your hands with Earth 7 times before entering the mosque!

I say goodbye to the family very pleased of having stayed with them and learned so many things during these days. I am sure that if I stay a few more days they turn me Muslim and find me a wife! 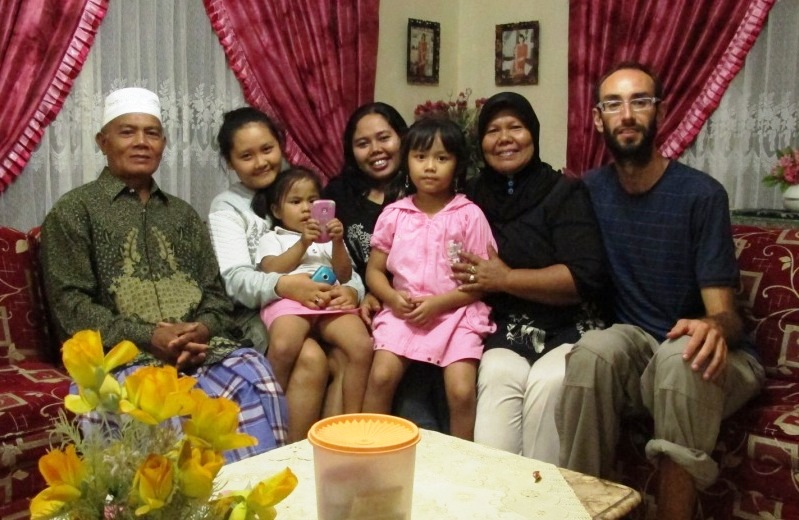 With Rina and her family

Arriving at the Kerinci area (300 km to the south) is an adventure. I ask several people at what time the bus passes to go there (“Berapa Jam bis ke Kersik Tua”) and I receive 4 different answers: “At 2, at 4, at 5, at 7…”. A day and a half later I arrive at Kersik Tua, a noisy village with  tuned motorcycles that would not pass the town noise control, surrounded by tea and vegetable fields and the volcano Kerinci, of 3805 meters, covered by a cloud. Women and men with a circular hat and well covered with plastics, to avoid scratching the skin or burn, gather the tender leafs of tea plants and place them on a bag hanging on their back. 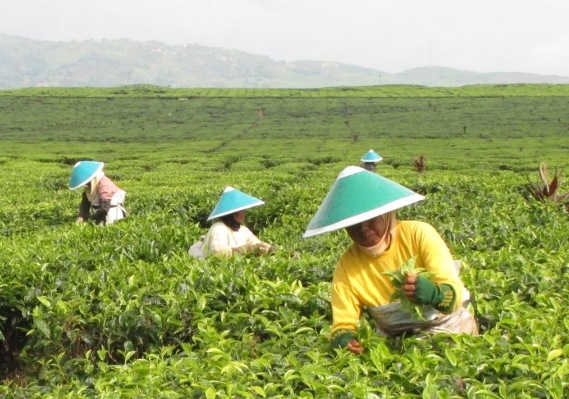 I met some boys who invite me to watch the match Spain-Croatia at 2 in the morning, but the Chinese channel where they do it decide to put a different show and we socialize. I spend a couple of days in town recovering from the mental fatigue of having been in Talawi, and once I have ensured that the tiger lives far away in a very specific place in the natural park, I organize myself to climb the Kerinci volcano. 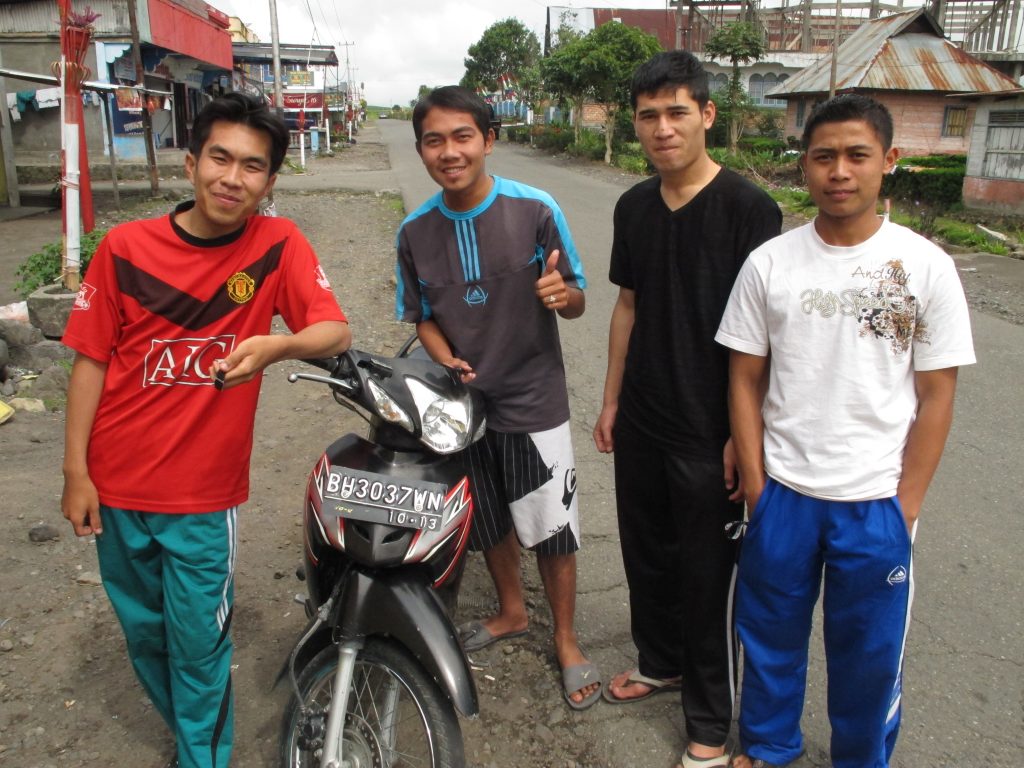 My friends at Kerinci

I ask to Ukasi, the woman of the hostel, to prepare some packages with rice and chicken and make some potato balls (Perkedel Kentang) that are very good… From now on I consider her the Ferran Adrià of Kersik Tua! I guess she has lots of experience. She is 70 years old ,  and has 9 children and 18 grandchildren, she must have made a bunch of Perkedels kentangs throughout her life!

At the beggining it´s hard to find the way to climb the volcano, but once I find it it´s just keep going up! The ascent of 9 hours of the volcano is magnificent, crossing a dense jungle with monkeys, squirrels and birds, reaching the scrubland and then arriving to a barren area with volcanic pink material and sulphur smell. The evening is incredible, with the fade colours of the volcano and some spectacular clouds underneath. 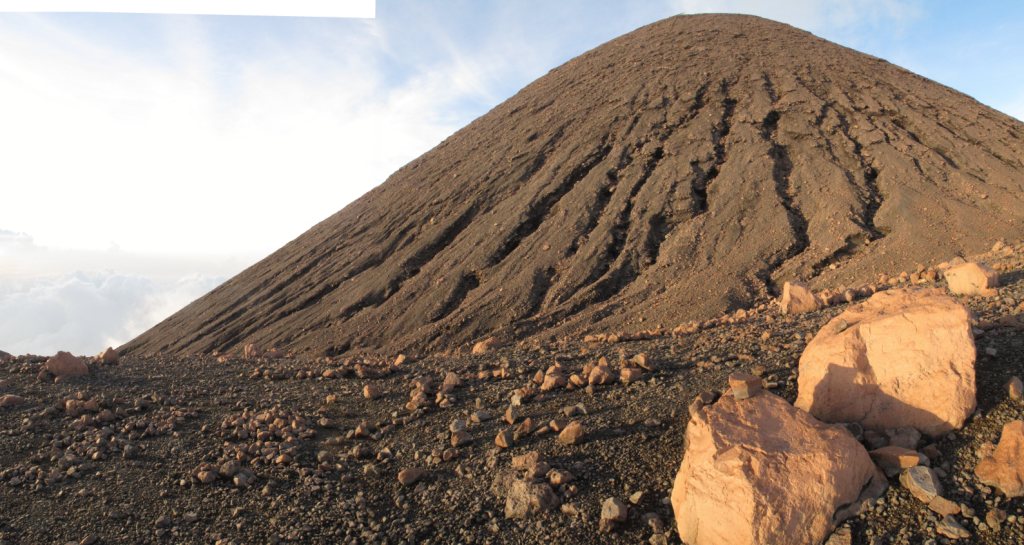 Photo of Kerinci volcano in the evening 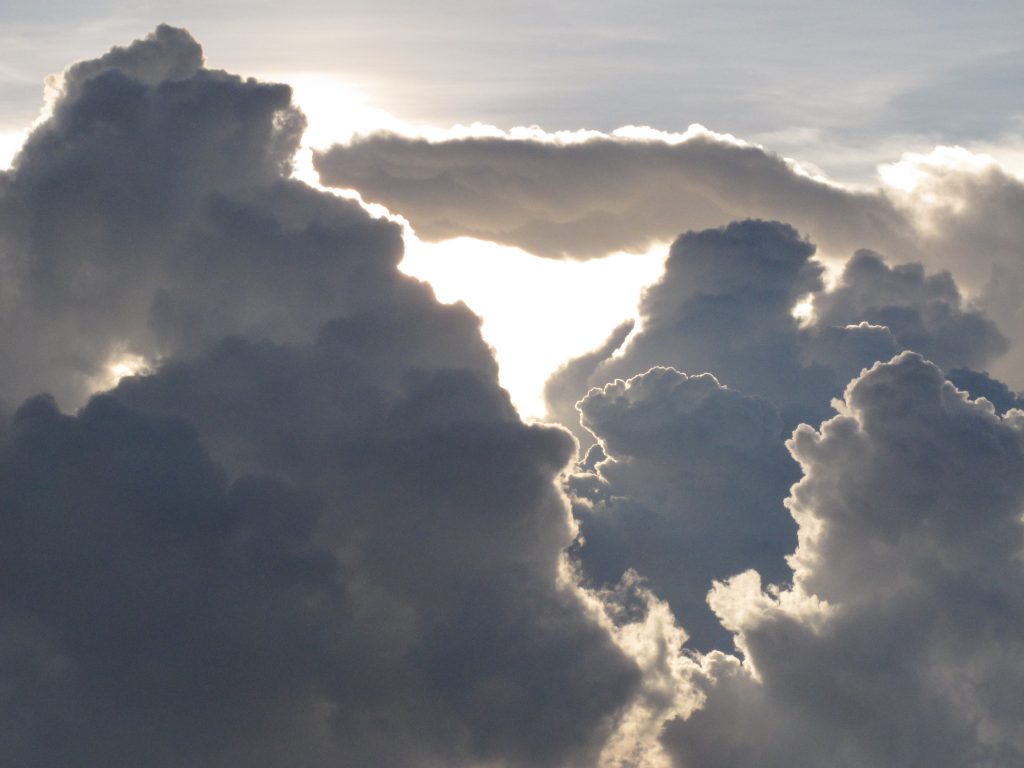 Clouds in the evening at Kerinci Volcano

I try to make fire at 3500 meters to heat dinner, but no way, the lighter does not work. Could it be for the lack of oxygen? The truth is that it is the first time I’m in a place where there are no gas canisters, and it makes me want to buy one of those stoves that run with gas.

Early the next day I climb to the top, and admire the impressive crater with a sulfur cloud that rises from a green lake at the bottom of the cone. Magic! 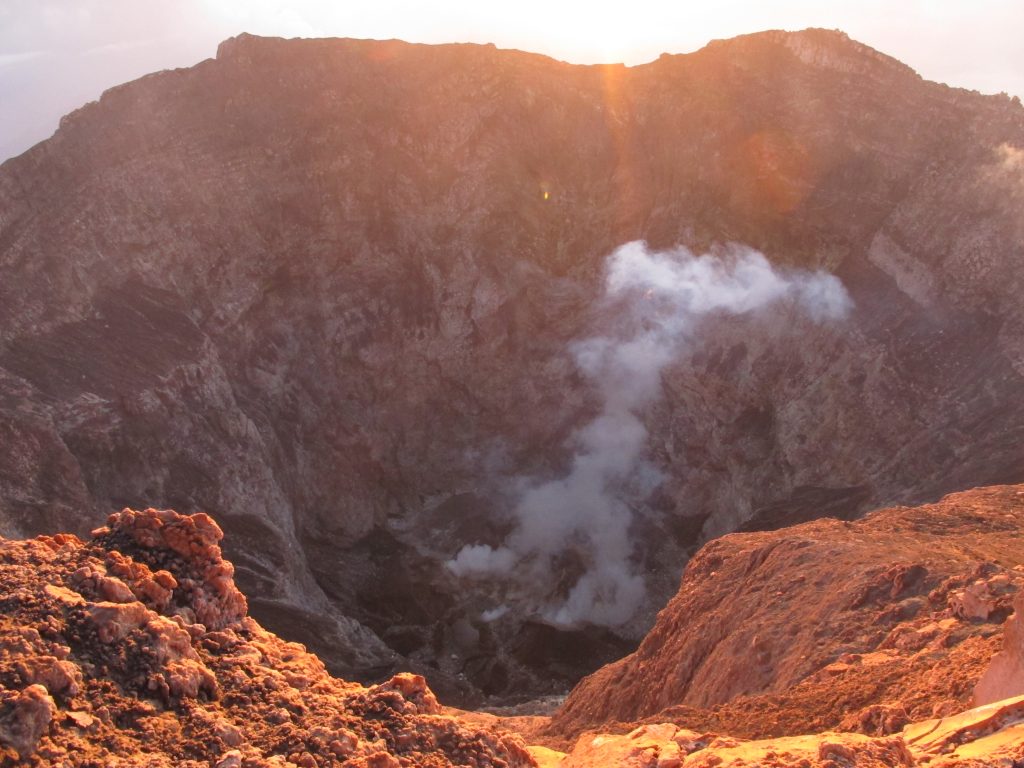 Once back in Kersik Tua, I met some Indonesians of Indian parents who are quite crazy and speak to me all the time in Indonesian although I keep saying “Saya Tidak mengerti” (I don’t understand). After making some photos rock band style, I took the night bus and went to Bukkitingi expecting to sleep after the long day at the top of the volcano.

So naive! The mini-bus arrives 2 hours late and with music at full volume! I’m at the rear of the bus and I have a speaker above the left ear and another on the right ear, and the driver passes back a plastic bag for vomiting saying “bulé” (tourist).

Ten long hours later and having slept reasonably considering the circumstances, I arrive at Bukkitingi, a pleasant tourist village with Indonesians and “Bulés”, where they have garbage collection and horse-drawn carts all around.

Here I take the opportunity to meet other travelers and go for a 2-hour excursion through the jungle to see the Raflesia, the largest flower in the world, which grows 15 km northwest in Palupuh. The flower, which takes 1 year and a half to grow and opens for 7 days, smells like wild boar. It can reach up to a metre and a half, although the one we saw was smaller. 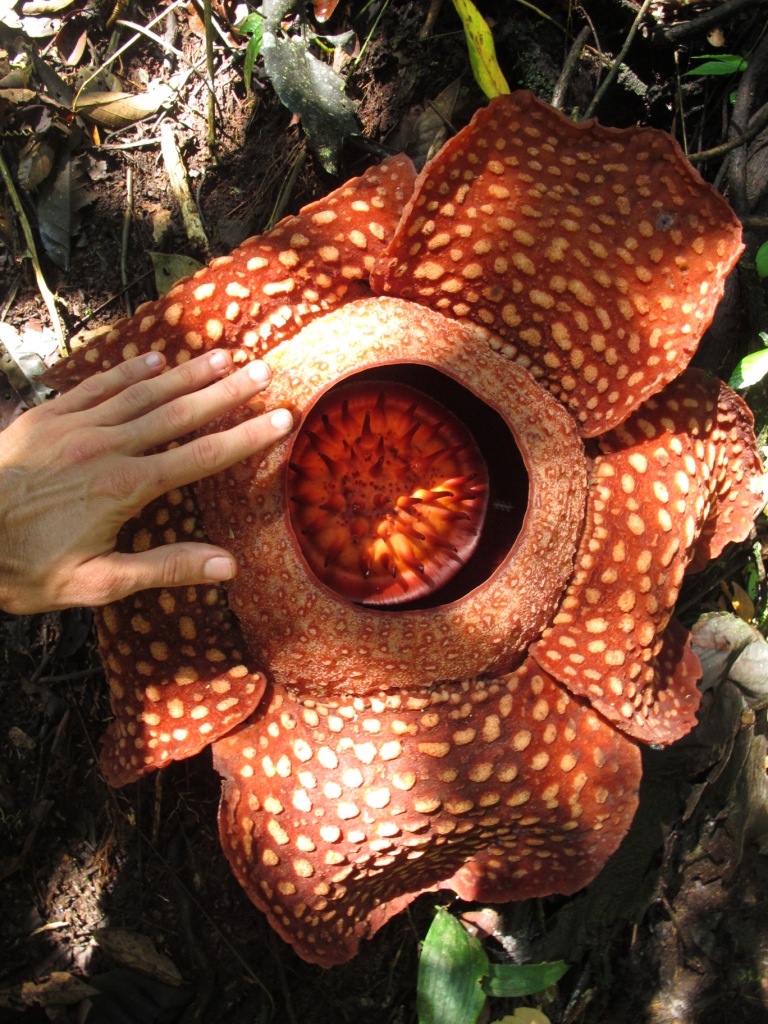 Returning to the village we were invited to a house where we drank a Luwak coffee, for $2, 4 times the price of a normal coffee. The Luwak coffee is made from feces of ‘civet cat’. From the different existing cat species, they choose those of a species that feeds basically with wild coffee and other plants, and that is strictly vegetarian. This means that their feces do not stinks. And it is precisely the feces of these cats the main ingredient of coffee Luwak. 6 days drying in the sun and roasted for 1 hour with cinnamon tree wood and let cool it two hours and, voila! You can already enjoy a delicious coffee Luwak, that is great for the skin and for the stomach! 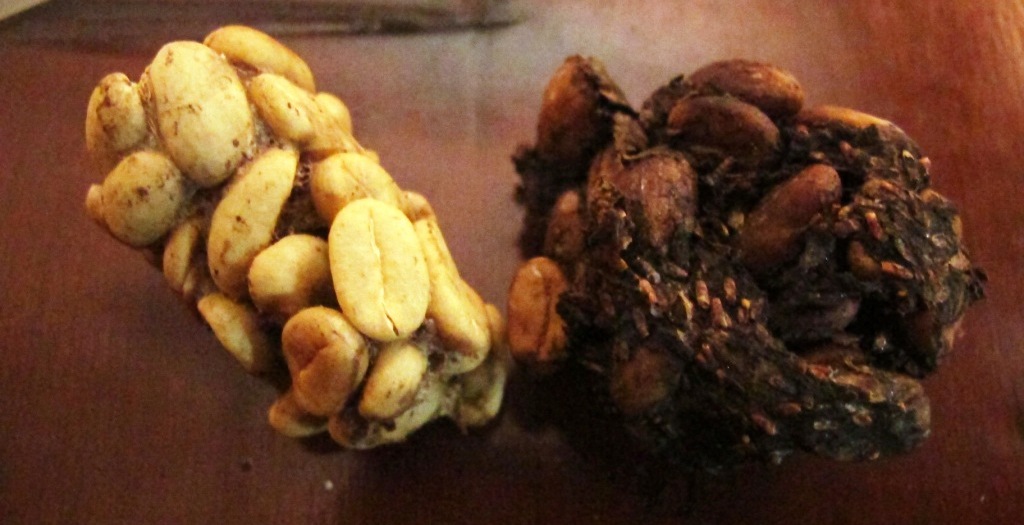 The fine materia of the comfortable Café Luwak

With several other travellers, we decided to climb the Marapi volcano of 2891 meters. The crater is just as incredible as Kerinci’s: every few hours releases a cloud of ashes and all side vents dropped gas clouds besides the huge main crater.

Once we decended from the volcano, I decided to get my things and go to Padang again, to take a boat and visit the tribes of  Siberut in the Mentawai islands. 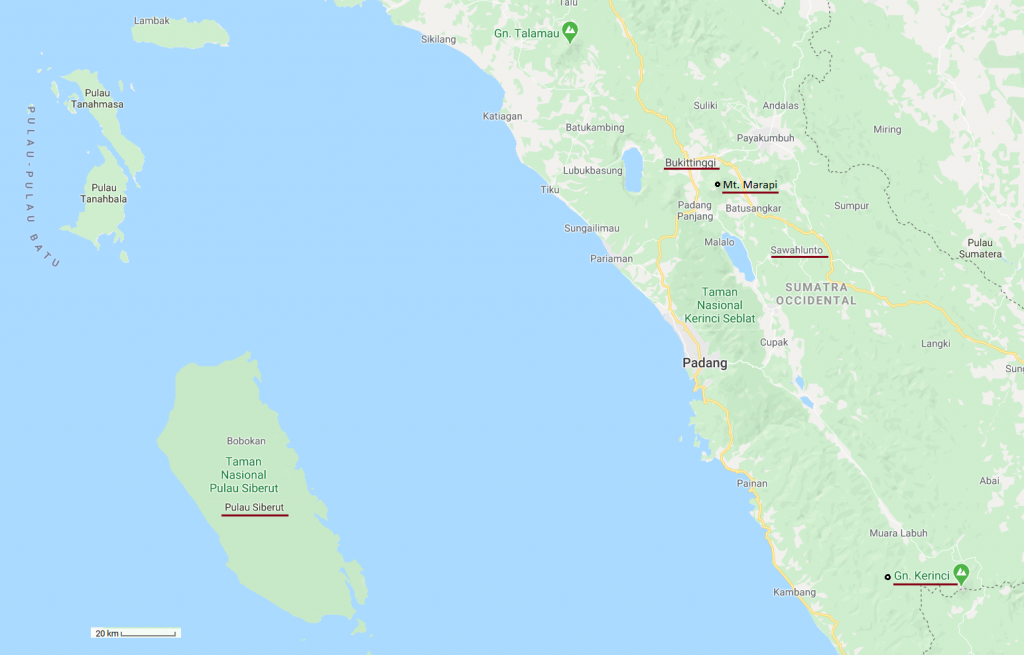