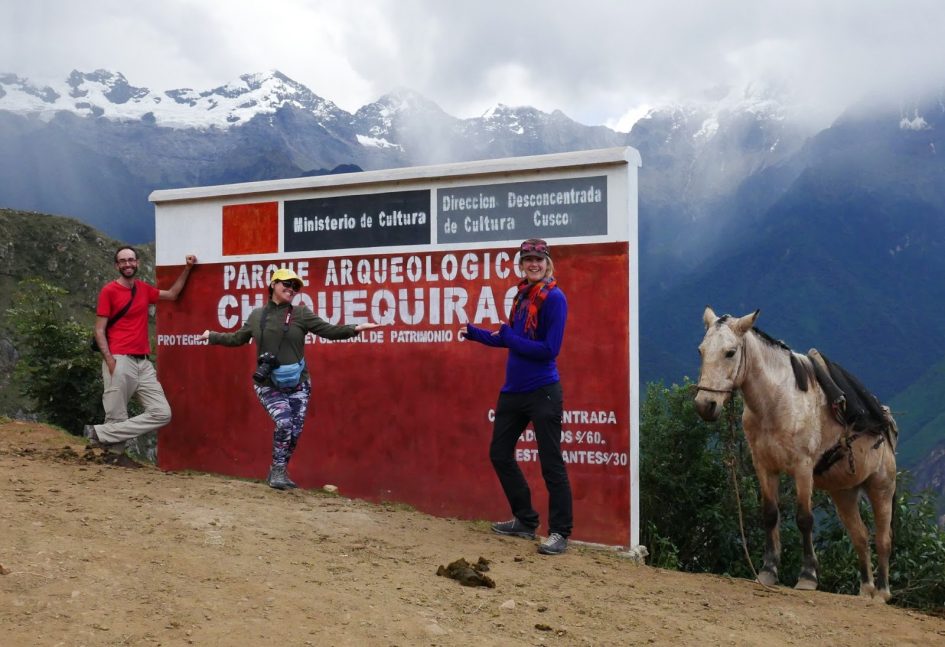 Choquequirao or “the cradle of gold” are ruins of the city that first belonged to the “Chankas” and then to the incas. Choquequirao is in the middle of nowhere and is considered as a sister city of Machu Picchu. Getting there takes two days walking through the middle of the Andes, next to the Apurímac River. Let’s do it! 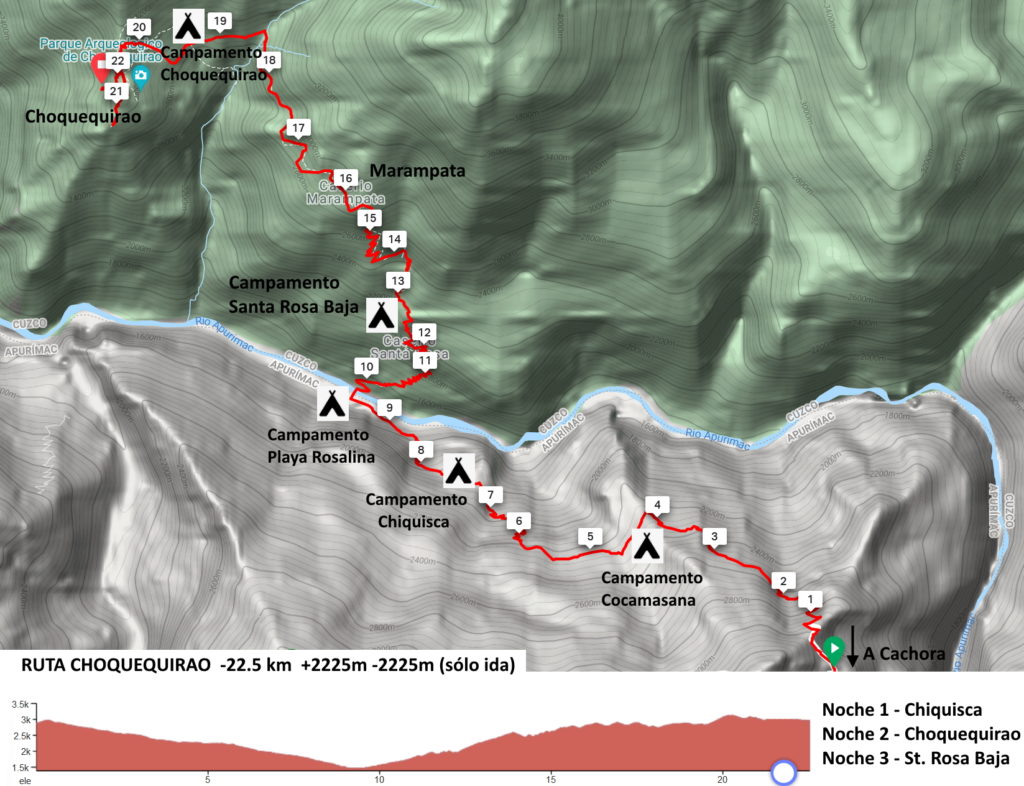 Map of the route (just one way)

With Marjorie and Katja we get up early and go to the calle Arcopata in Cusco, where we immediately find a driver who takes us to Cachora, where our adventure begins.
The departure from Cusco is very spectacular, crossing the high zone with cows in Ancahuasi, and then descending to the warmer areas of Limatambo and Curahuasi where they produce mango, mandarin oranges, and “palta” (avocado in Peruvian), to go back up again.
Cachora is quite high, at about 3000 meters. Here we register and eat next to the police station, in a place where a lady cooks really well. I think I remember that was the René restaurant. 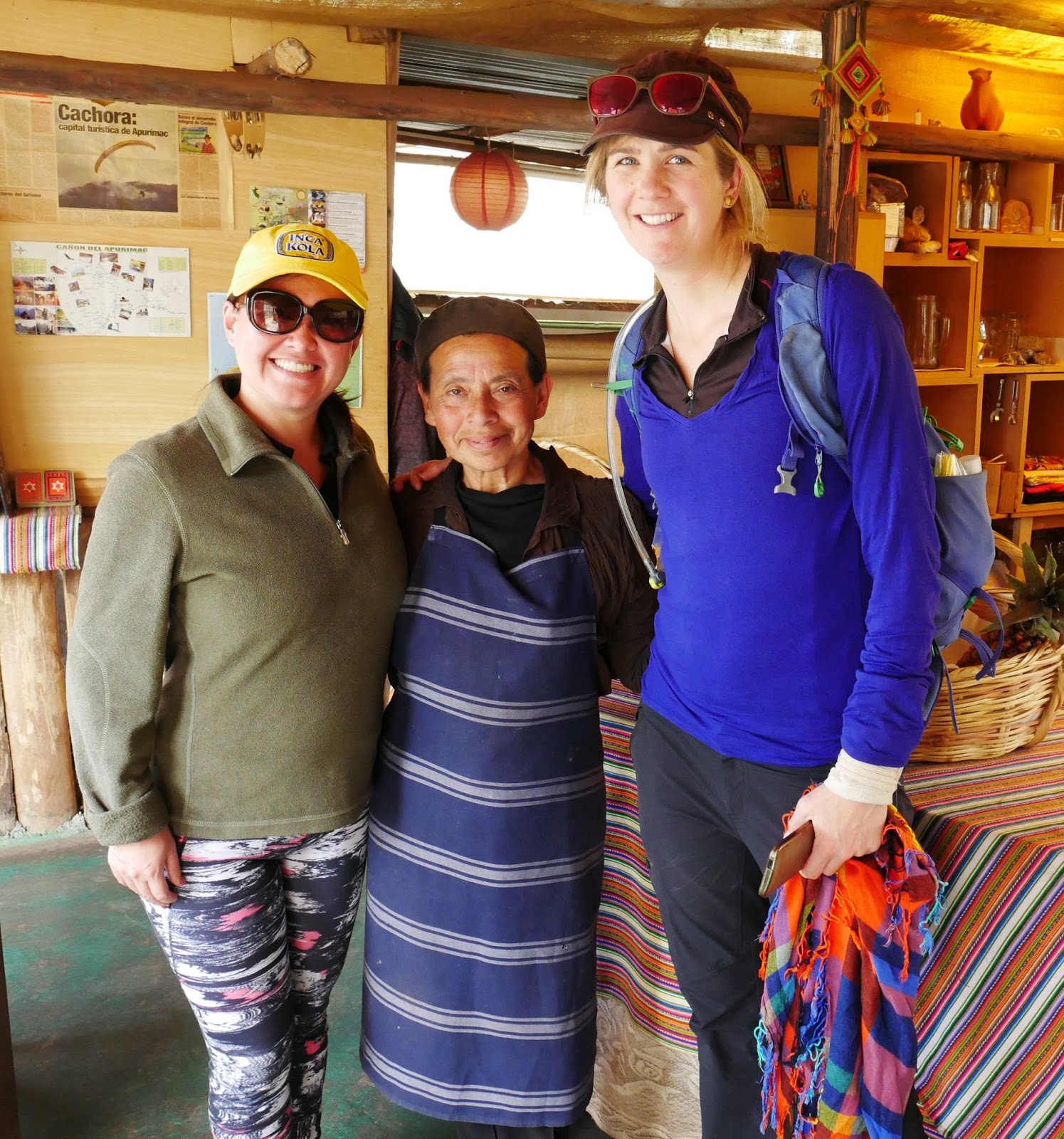 As we are a little tight on time, we have arranged the trip with a lady from Cachora, who has organized the mules for us (tel 979 772 105). We will have 2 mules and a “muleteer” who will carry our luggage for 80 soles a day.

To save 10 km of track, we go to Capuliyoc by car, where we start walking around 2 in the afternoon. Here we also meet Carlos Peña Damián (tel 984 031 124), our muleteer, a man of few words who becomes more animated during the journey.

Some 1,400 meters below the Apurímac River passes, and the “Apus” or sacred mountains around us have several clouds attached that give a mystical touch to the landscape.

Start of thetrail to Choquequirao

We go down, enraptured by a wide and easy-to-walk path, and after three hours we arrive at the Chiquisca camp, where we settle before nightfall. 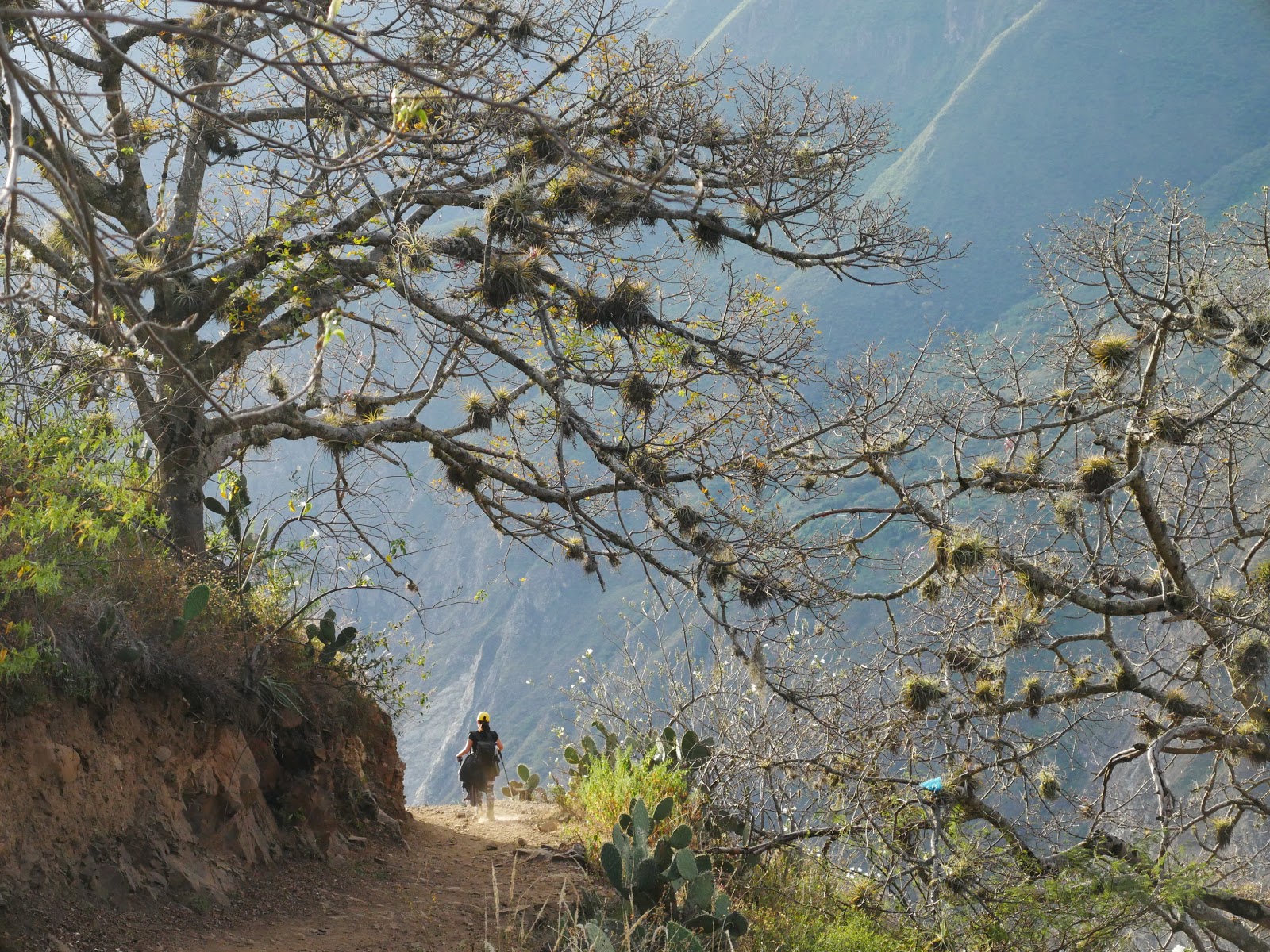 Mar going down towards the Chiquisca camp

The second day we get up early, with the sky very unpleasant. It is truly a blessing, since today is a day with long climbs, and doing it without the sun will be fantastic!
After an hour we arrive at Playa Rosalina where we register in a visitor’s book, and we cross the bridge over the Apurímac River while a fine rain fell. 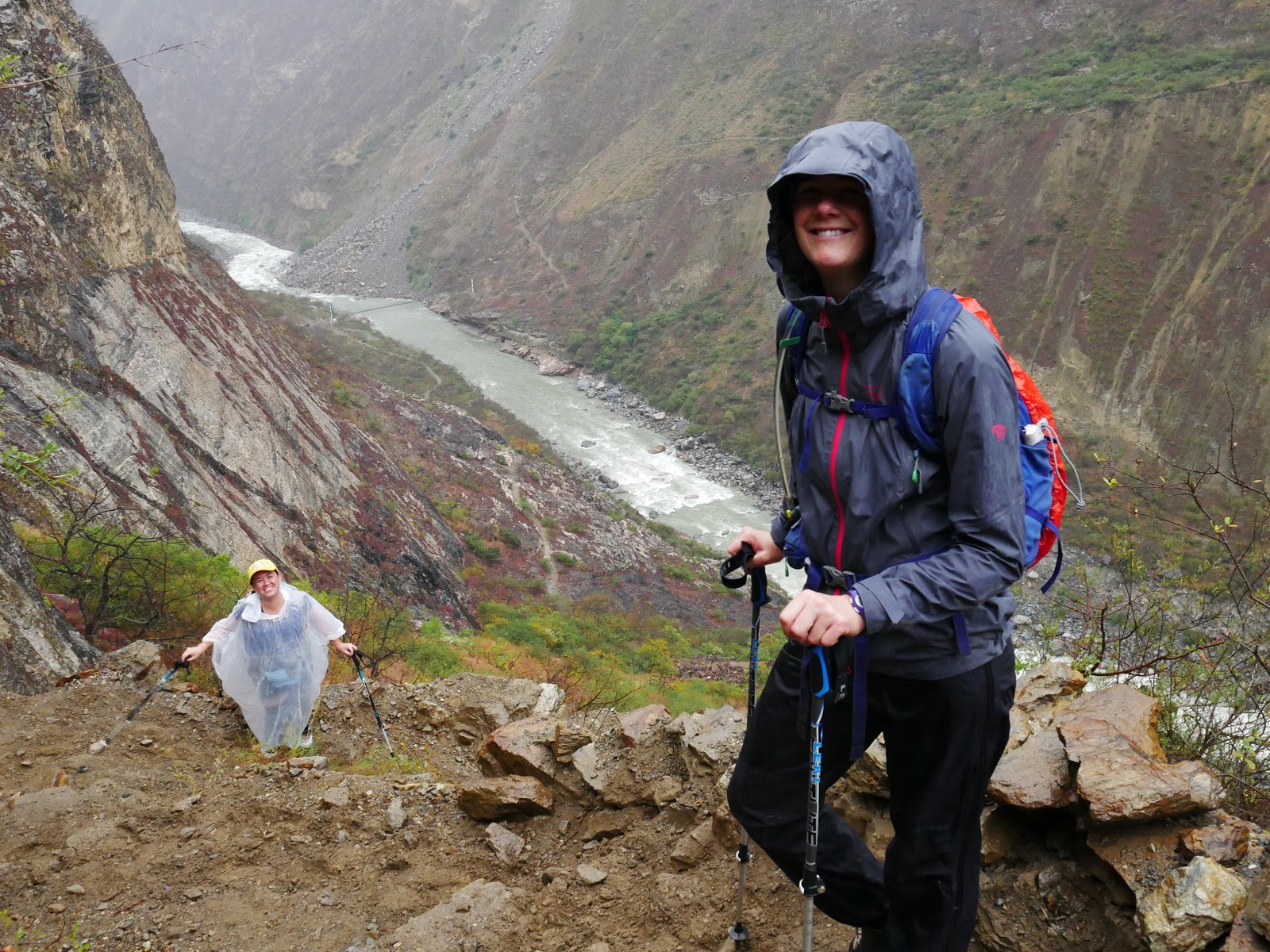 Going down to the Apurímac river

The climb is quite hard, but having a light backpack helps. We eat in a small town called Marampata, about 3000 meters high and the weather begins to improve. We speak with a local couple, and they tell us that their ancestors were deserter soldiers who settled here at the end of the 19th century, fleeing the guano war between Chile and Peru.

The weather is improving, and the landscape is spectacular, with the Marampata houses surrounded by green meadows and the Apurímac Gorge at the bottom of the valley. We eat surrounded by chickens and a cat.

We continue walking and arrive at the control gate, where we pay 60 soles  per person. The guards tell us that the ruins receive an average of 20-30 visitors per day. There are several plans to bring more visitors to the ruins, through a cable car, which will drastically change the visit of this site.
After a while, we see the first terraces of Choquequirao on the other part of the mountain. Katja is totally amazed, she wonders: “How could someone have made agricultural terraces in such a crazy place?”. They are on the edge of a giant cliff.
Carlos tells us that the terraces we see are shaped like a “colibrí” (hummingbird). Peruvians have a great imagination when it comes to seeing shapes in stones, mountains, and ruins, and we affirm that he is right. Katja approaches us in private and whispers: “I think it looks more like a “chanchito”!” (A little pig). 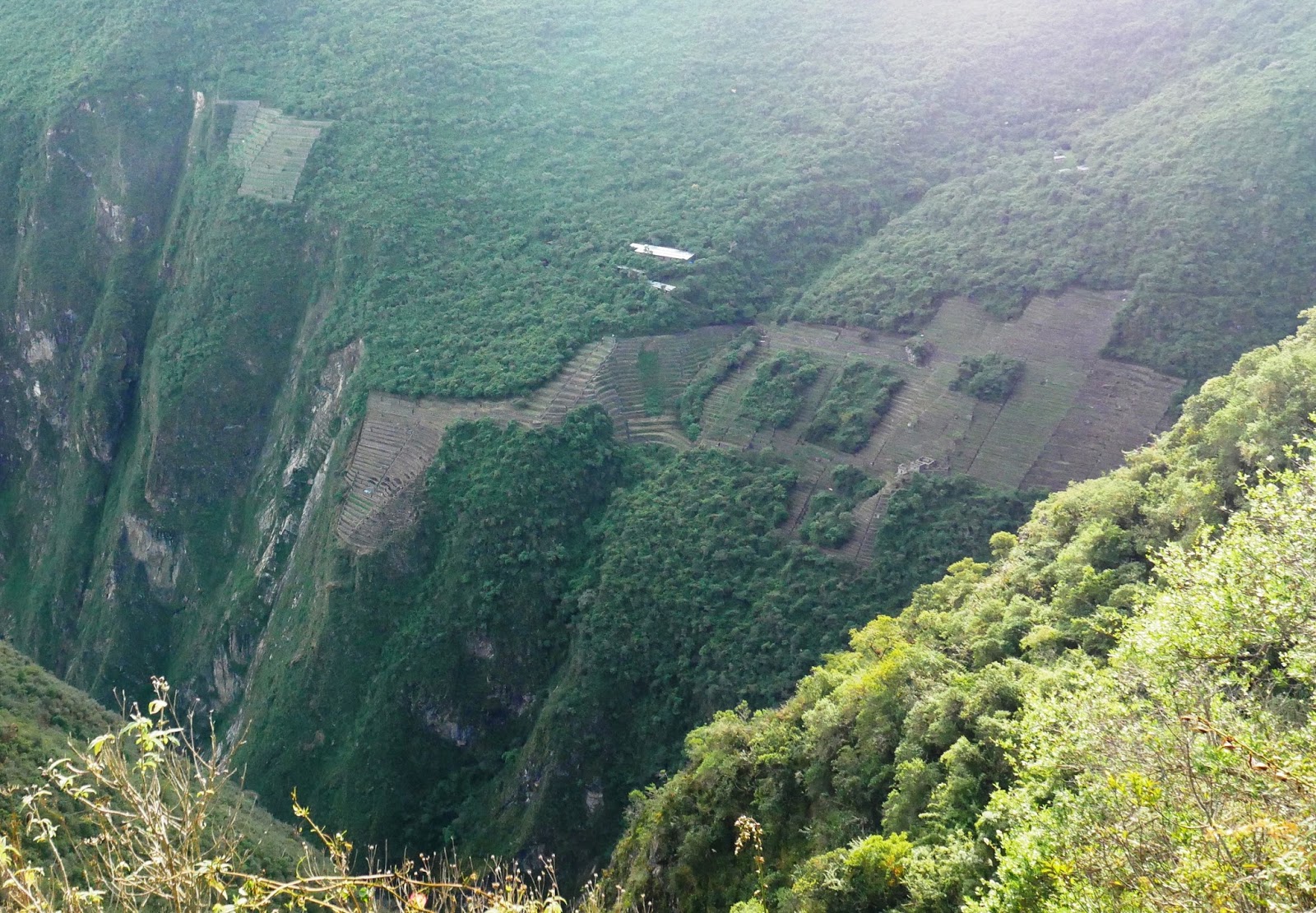 We camp at the Choquequirao camp with a clear sky, which allows us to see the Southern Cross and other constellations. Carlos is very talkative tonight and tells us stories of when he accompanied the archaeologists when they were exploring the ruins, and of all the theories that he has about Choquequirao, what was it in the past, what meant the constellations according to their Inca ancestors….

He also makes us a sketch of what he recommends us to see the next day since he will return to Marampata so that the horses can eat.

Today’s the big day! We get up early, have breakfast, and go to the ruins!
The main square of Choquequirao is located at 3075 meters of altitude and is a spectacular place. Although the metamorphic rock is not as fine as that of Machu Picchu, made of white granite, the place is of sublime beauty, with the Apurimac canyon at the bottom and glaciers in the distance. Like Machu Picchu, the city was never discovered by the Spaniards.
70 percent of the ruins are still under the vegetation, the place is quite large, and it took us 6 hours to explore it thoroughly. Marjorie today has renewed energy and goes up everywhere as if she was a goat!

It is a privilege to explore without hundreds of people taking pictures with selfie-sticks around. A fantastic aqueduct comes to the main square from a hill where there are religious buildings and some “colcas” or warehouses. Next to the square there are some very well-preserved giant buildings and other smaller ones that they think were workshops. 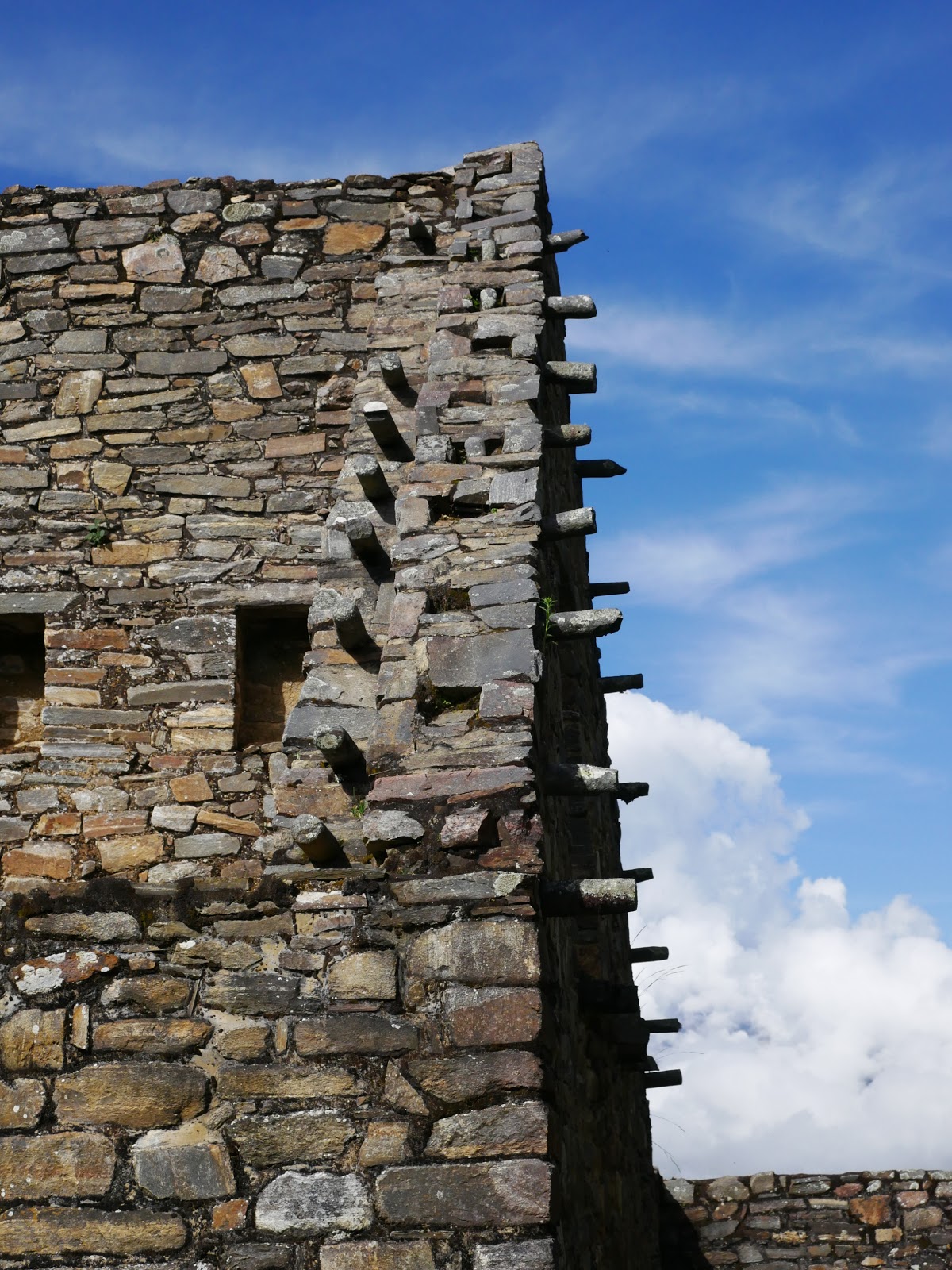 Detail of a building in Choquequirao

We climb a hill where it is believed that ceremonies were held and beyond there is “the priest’s house“, some quadrangular buildings next to a viewpoint where you can see all the splendor of the Apurímac River and the surrounding valleys.

The place where we hallucinate more is the terraces of the “llamas of the sun”. They are terraces that point to the west, and we try to remember what Carlos explained to us.

Starting at the bottom, there is a shepherd who looks like the Inca constellation of the shepherd, with a sling, and higher up there is a single llama that a few terraces above turn into a llama with a baby. The llamas are more and more abundant as you go up.

Above, there is a snake or “Amaru”, an animal that connects the world around us, or “hanakpacha” with the underworld “ukupacha”. The llamas face north, from where the Inca constellation of the “bright llama” (the lyre) comes out.

Tired and satisfied, we leave the ruins and return by the  same way we did yesterday to the Santa Rosa Baja camp. If you have more time, you can continue to Machu Picchu (3-5 days) or to Vilcabamba (even more days).

Today we only have to go back. We get up early, at 4, to avoid the heat, and we start walking with the headlamps. At 7, we arrive at  Chiquisca, and we go up to Capuliyoc where we arrive around 10 in the morning. At precisely this time there are cars that have taken hikers who will start the route. It’s a pretty tough route and we look at how they smile while we think: you don’t know what awaits you!

We say goodbye to Carlos and take the opportunity to return to Cusco in one of these cars.

It never ceases to amaze me how easy it is to get around in Peru!
We leave the backpack at home and go to Casilda, a restaurant with typical Peruvian food, to celebrate a good adventure!
Yep Yep Yep