The city of Arequipa and it´s ashlar stone or “sillar” 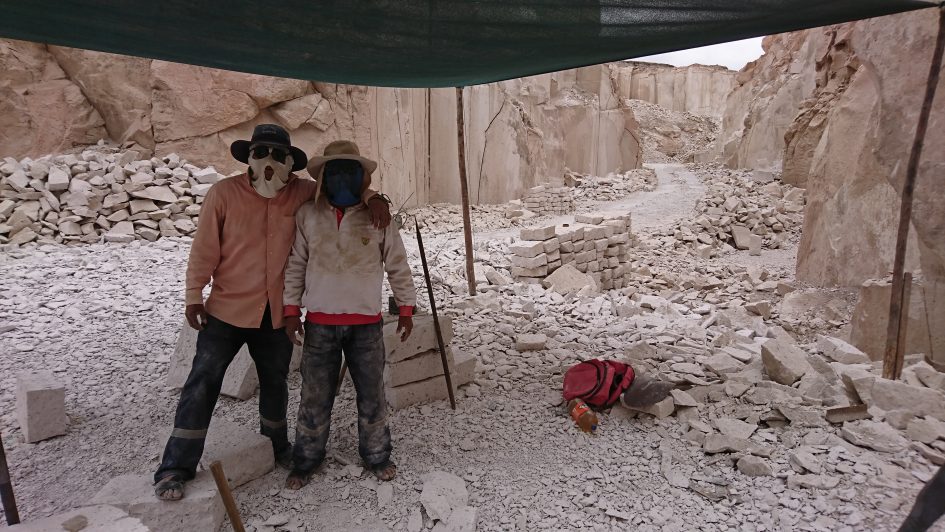 The city of Arequipa is known for being surrounded by three imposing active volcanoes, the Misti, the Chachani and the Picchu Picchu, for the “momia Juanita”, found at the top of the Ampato volcano in the 90s and also for its delicious queso helado “cheese ice cream”.
But one of the things that makes it unique is the use of ashlar stone for the constructions, white in color, which gives it the nickname of Arequipa, “the white city”, with buttresses designed to better withstand earthquakes. They have told me that there are some quarries where they extract the ashlar or “sillar” in spanish and I decide to visit them.

I stop the first taxi I find and ask him to go there. The driver’s name is César (tel +51 947 874 921) and he is very adventurous, great for exploring the quarries and driving along some crazy trails.

I tell him to take me to the ashlar quarries of Añashuayco and it takes us a long time to find them, among modest neighborhoods with dusty streets and abandoned dogs. Better to go to this point of reference in Google maps cantera de Añashuayco.

We arrive at the information point, pay the entrance fee and find ourselves in the middle of a wide valley from where they extract the ashlar. On one wall they have made a relief of a man working the ashlar in the middle of some columns that give it a very solemn air. There is also the flag of Peru engraved on a wall. 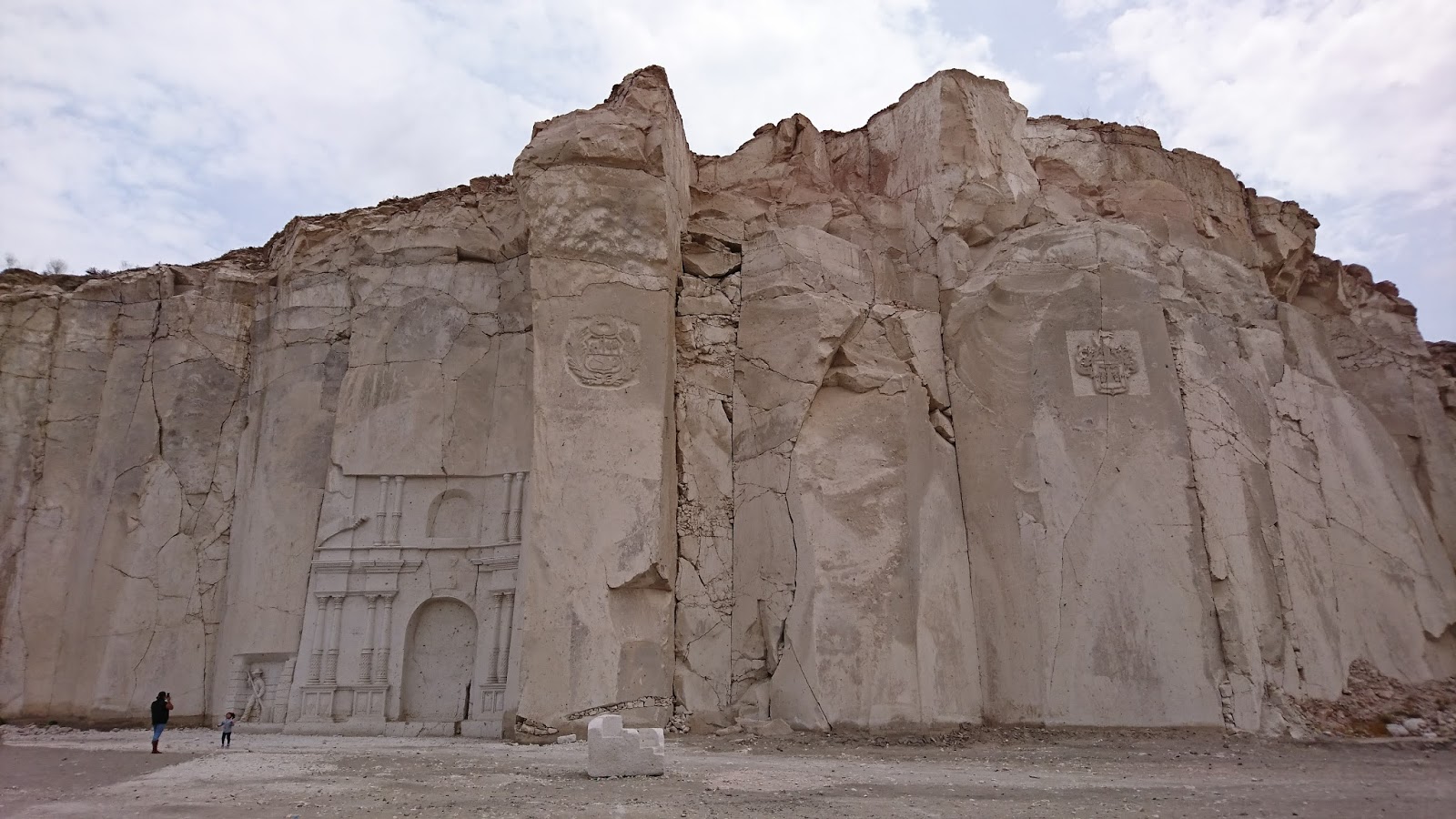 Sculpted rocks in the Añashuayco Quarry 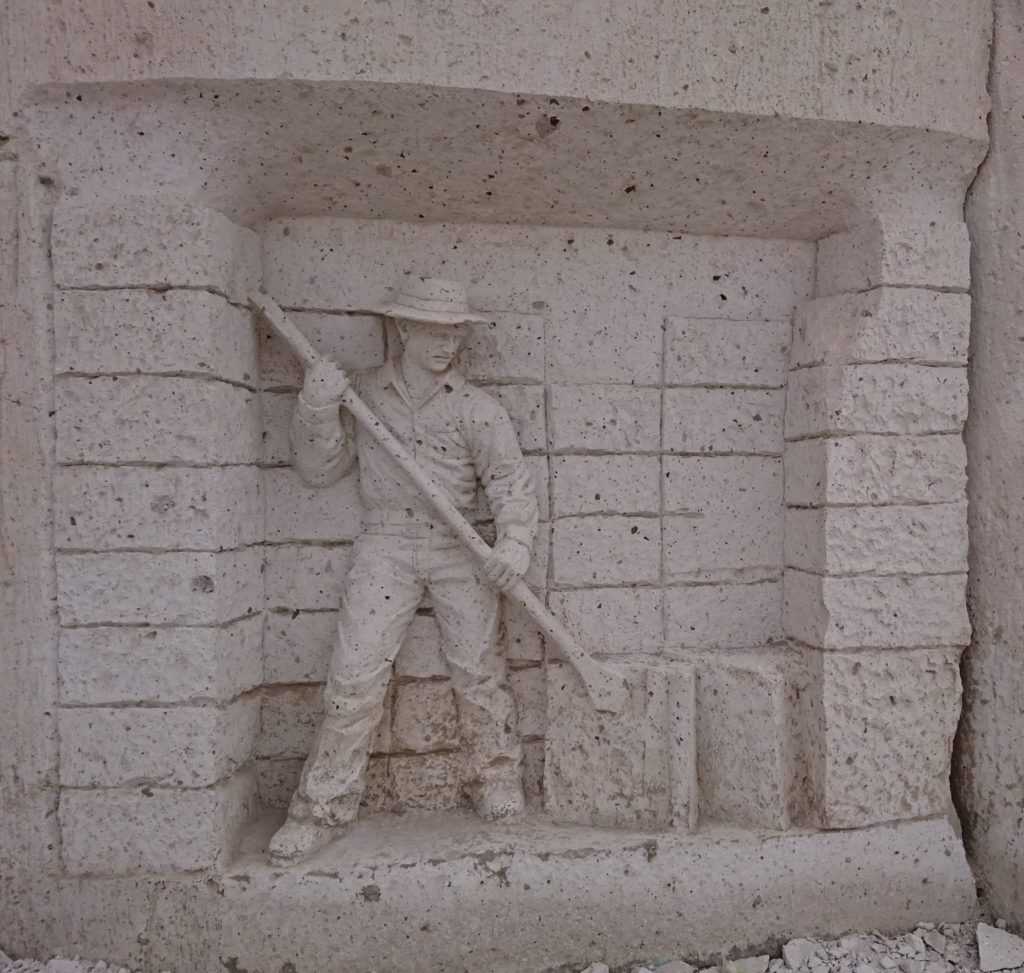 Ashlar is a stone of volcanic origin from the Chachani. It seems that a large gas cloud with very small igneous fragments invaded the surface at the foot of the volcano at a very high speed, and as they slew down, these fragments coalesced due to the temperature, creating a layer of “ashlar”.

I speak with a worker who works with a hammer and a punch some blocks of “sillar”, carefully cutting and stacking them. His name is Claudio and since he was 10 years old he has worked in the quarry, 50 years ago.

He tells me that it is hard work. He chews coca leaves to be less hungry and because he says it protects his lungs as if coca were a filter. Although the work could be done with a machine, it is usual to cut the stone manually, being handmade.

With César, we drive down through the Valley along a path full of stones and some workers from the area greet us from a truck that takes the blocks already cut from “sillar”.
We turn right to the asphalt highway AR 114 (which goes from La Joya to Arequipa) and we continue for a few kilometers in the middle of the Cerro Colorado neighborhood. More and more people have settled in the middle of the desert, in places without water or services, attracted by the job opportunities of the city.

We follow signs for half an hour until we reach Culebrillas (Google Mpas de Culebrillas): a spectacular “sillar” gap opens in front of us, with dusty roads and scattered groups of men working, protecting their bodies and faces from the dust and the sun with fabrics. 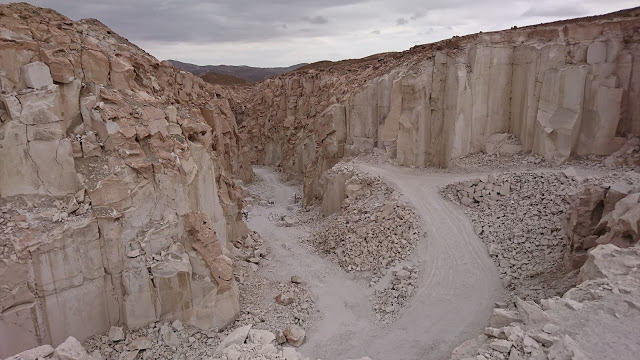 I speak with the brothers José and Daniel Castañeda, who tell me that they are from the north, from Chimbote, where they were fishermen. When they married some girls in the area, they began to work with their father-in-law in the quarry. He says they pay them about 5 soles (about 1.5 dollars) per stone and that they own about 1,200 soles a month, 370 dollars.

They explain to me that by the sound that the stone wall makes when they hits it, they can tell if it is going to fall or not, and they tear it down to cut the blocks to a set size that makes it easy for the workers to lift and work the stone.

If you want to see in detail how a block of ashlar is cut, you can see this interesting video of the Castañeda brothers in action: 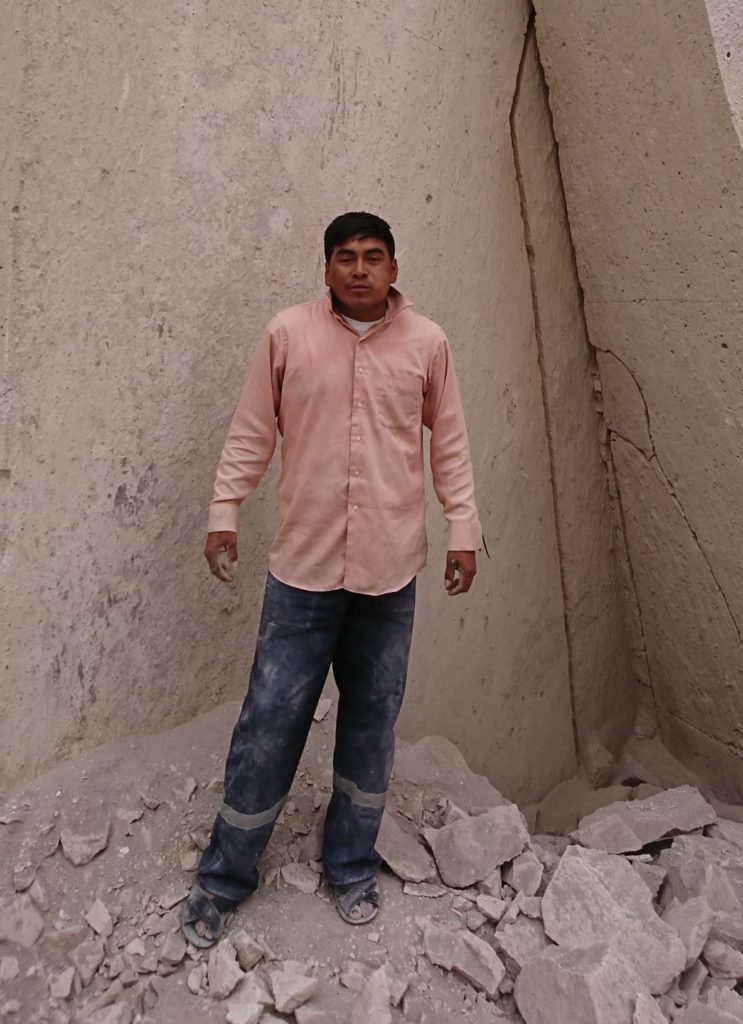 I go down the canyon seeing different groups of workers. Some indicate me an area where there are marks on the walls of the “antiguos” or the ancient, from 300 to 1400 AD, and some newer ones, with geometric shapes of animals (camelids, deer, birds), of the sun … For the ” ancient “this type of site was a” paqarina “, a sacred place of origin of humans and animals. 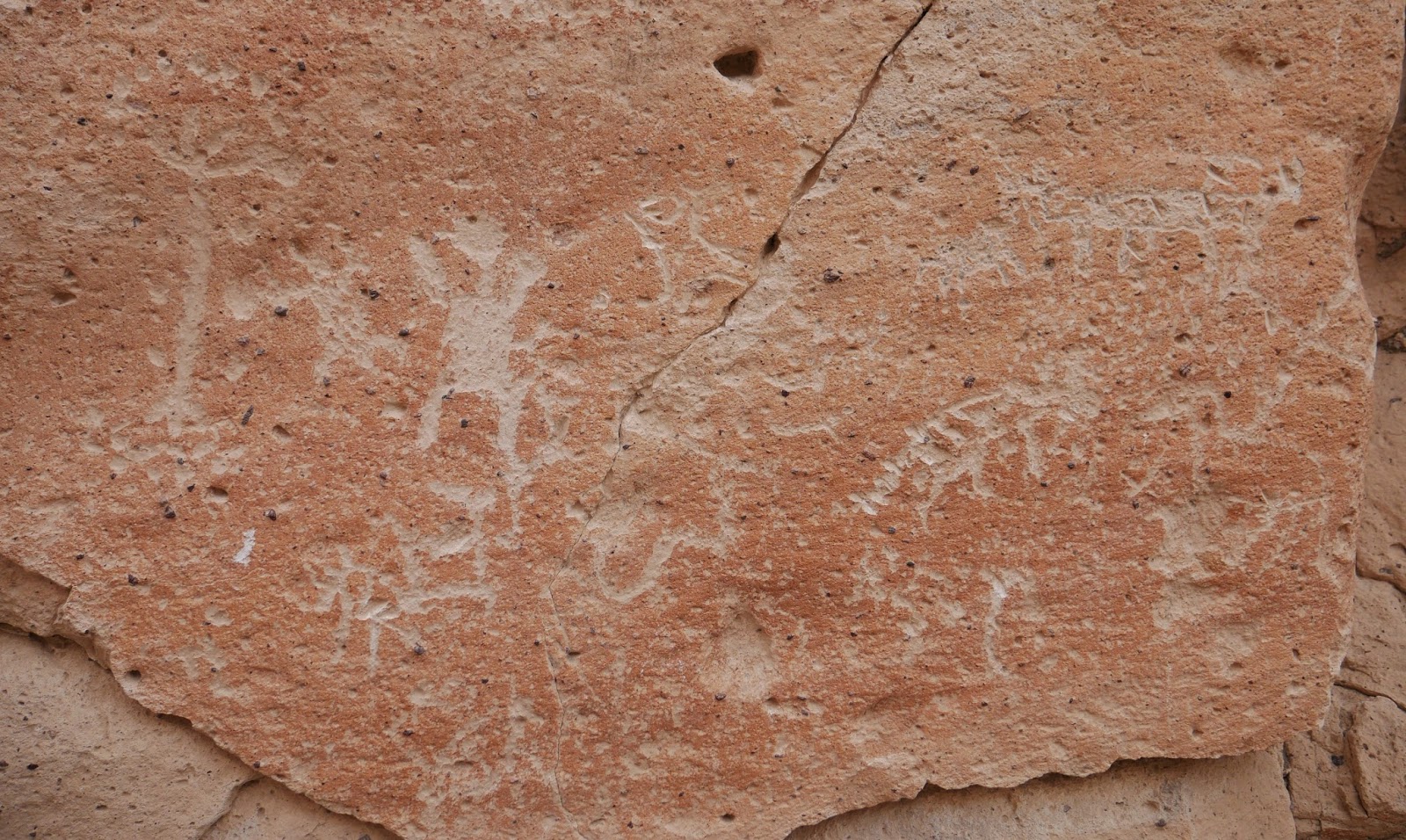 Marks of the “Ancients” in Culebrillas

To end the day we return through Cortinada along a path full of rocks to Uchumayo and from here to Arequipa, with a fantastic landscape of desert and orchards along the Chili River, which could well be the same path that the “sillar stones made until they became part of the imposing houses, cathedrals, and monasteries of the city of Arequipa. 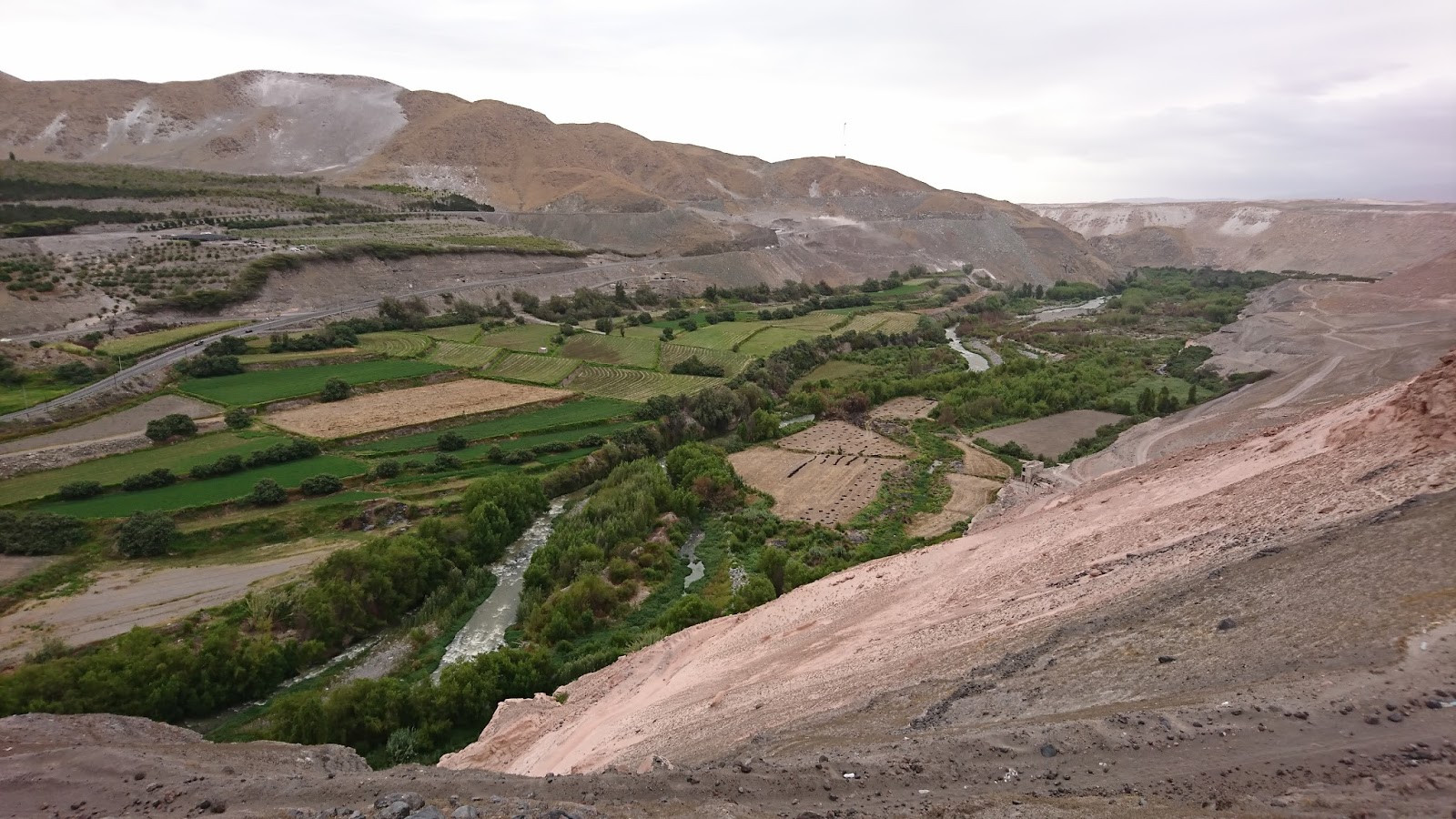 Fields and desert nearby Arequipa

P.s. You can find more info in the ruta del sillar webpage